Predictive analysis is the science of connecting Cycles of distinctly unrelated events to one another in a repetitive and predictable fashion. By doing so, We can effectively look at one event and “know” the likelihood of a specific behavior of the other.

What are cycles, and why should you care?

The concept of cycles is easy enough to understand, that is that there are predictable, and repetitive patterns all around us. But it does not stop there-

In fact, that is just the beginning…

The Birth of Cycles, and Predictive Analytics

The year is 1931. The U.S. economy has contracted a staggering 25 percent. Millions of workers have lost their paychecks. Consumers are hoarding money, delaying all but the most essential purchases.

President Herbert Hoover could not have dreamed of a more adverse environment to begin planning his re-election campaign — not even in his worst nightmares.

The public and the press demand to know who or what was to blame for this catastrophe. To survive, the Hoover administration would have to give them answers.

But the president knows that just ANY answer will NOT suffice. Only a credible, exhaustively documented, scientific answer could have a chance of restoring the public’s faith in his administration and in the U.S. economy.

Later, Dewey will create a nonprofit foundation. And with this foundation, he and his successors will continue a 78-year quest for the mysterious forces that drive the economy and investment markets, joined by many of the best minds from Harvard, Yale, Princeton, Oxford, Temple University, Western Reserve, and other globally respected institutions.

The Foundation’s mission is championed by men at the very pinnacle of the scientific establishment — Charles Greeley Abbott, the head of the Smithsonian; William Cameron Forbes, the chairman of the Carnegie Institution; and Wesley Claire Mitchell, the founder and director of the National Bureau of Economic Research.

In the years that follow, the time-tested tools for timing the markets developed by Edward R. Dewey and the distinguished scientists who continued his research are used by major corporations, banks, brokers, and investment analysts worldwide.

Cycles are the simplest thing in the world, at least in principle. Let me give you an example:

Suppose you are visiting my house and, looking out of the window, notice a bus pass by at 10:00 a.m. Half an hour later at 10:30 you notice another bus pass. At 11:00 you see another one, “Ah ha!” you say. “Buses here run every thirty minutes.” You have discovered a cycle all by your little lonesome, without benefit of slide rule or gobbledygook. Cycles are just as simple as that.

Well, first of all, you have a basis for predicting the probabilities of the future. If we go in to lunch and come out of the dining room at 1:05 you will know that you probably missed the 1:00 o’clock bus and that, if the cycle is continuing, your next bus will pass in 25 minutes. So you-chat for about 20 minutes and leave at 1:25 so as to have to stand in the wind and the rain the least amount of time.

Of course the schedule may have changed, or the bus have been delayed by an accident. You can’t count for sure on a bus at 1:30. You are merely playing probabilities.

Where you have regularity you have predictability – at least to the extent that the regularity governs, and is not present by chance.

Now let’s do some more supposing.

You’re overlooking a street near the center of a small town. Every ten minutes or so 10 or 15 people come along, more or less in a bunch. Another cycle! Again you can predict (with qualifications). More than this, with this regular result appearing before you, you have a right to assume a cause – if the time intervals have been regular enough and have repeated enough times so that the behavior cannot reasonably be the result of chance.

You don’t know the cause but there is no law against guessing. So you guess that, there is a bus station around the corner and that every ten minutes a bus comes in and discharges its passengers. If you then find out that there is a bus station, and that a bus does come in every ten minutes, your guess is bolstered. It is bolstered still more if you find that the buses arrive just about the time your bunches of people have been coming. But you still don’t know that your people are coming from the buses. You would have to go out on the street and go around the corner to find out for sure.

You continue to watch and count the people. You see other patterns. Every other ten-minute group of people is bigger. Perhaps there is a second bus with a twenty-minute schedule that reinforces the crowd from the first bus.

A New Science – These two facts cry aloud for the creation of a new science – the science of cycles – which is concerned with rhythmic fluctuation per se, which will develop techniques of cycle analysis, which will isolate cycles in all the 30 or 40 different branches of science where cycles are important, and which, having assembled enough facts, will perhaps someday venture to advance some theories in regard to cause and effect.

The Foundation for the Study of Cycles was created, in 1940, to found such a new science, and to develop it to the point where it could serve mankind. In the eleven years which have elapsed since its creation, the Foundation has made slow but steady progress.

It should be clear from the above remarks that the Foundation is purely an educational and scientific body and in no sense a commercial organization. It exists, not to make money but to serve mankind.

An eminent group of scientists and administrators have lent their names to the Committee of the Foundation. Various scientific societies have appointed advisors to help with its awards, and many individual scientists have joined the Foundation as scientific members. On its part, the Foundation has tried to maintain the high scientific standards of the many universities and institutions here and abroad which are, through their professors, connected with it, and I think we have pretty well succeeded.

Cycles Can Help You, Too

The results of the Foundation’s research are made available to the general public by means of reports, bound together and issued 12 times a year in – the form of a magazine called Cycles – A Monthly Report.

The following graphs come from Dewey’s articles in Cycles magazine and later published in the above mentioned collection. Because they are historical data they do not include the recent past. Please excuse the quality of the reproduction. Note also that for most of the graphs Dewey removed the trend of the series by subtracting a moving average from the data with a length approximately equal to the cycle period. The dotted lines show an “ideal” regular cycle of the stated length.

Canadian Lynx abundance has varied by a very wide factor on a 9.6 year cycle. This is very clear cycle with over 230 years data and is considered to be one of the clearest cycles known.

The 9.6 year cycle has been found in the populations of insects, fish and mammals. It is also present in the propensity for humans to have heart attacks. This seems entirely weird until the last member of the group is added, the variation in ozone. Is this a hint at the connection? 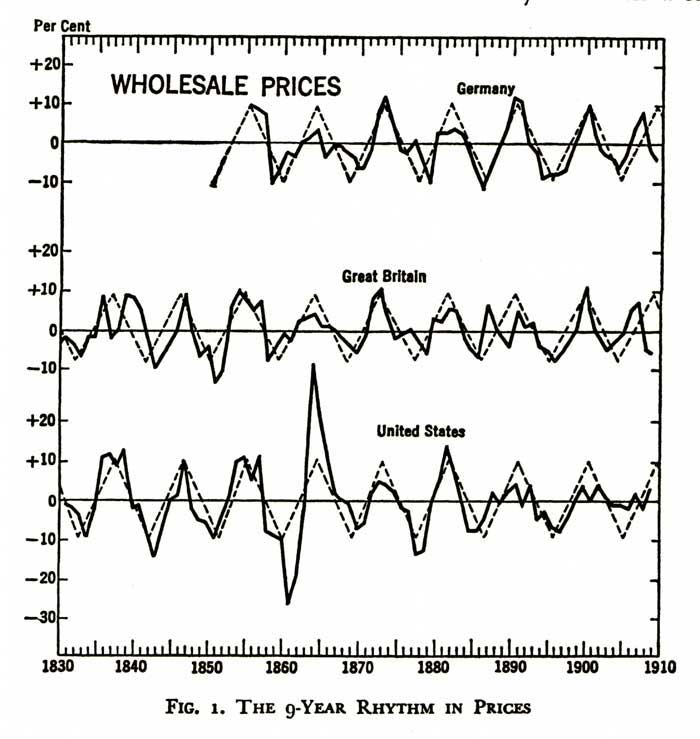 Wholesale prices in different continents show not only the same 9 year period, but also are in phase. This tendency for equal periods, even for unrelated series, to have synchronized phases is called “Cycles Synchrony” by Dewey. 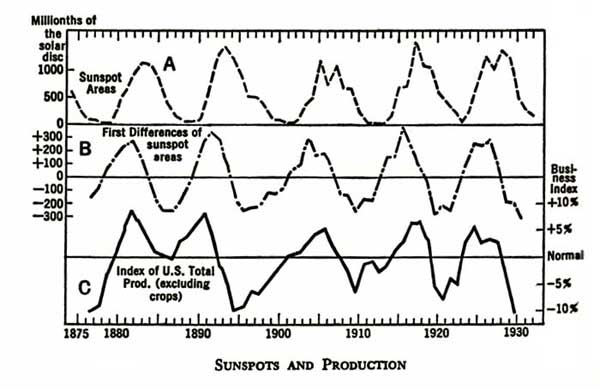 Industrial production is shown to be closely correlated with the rate of change of sunspot activity. This is an area which has often been criticized, but the graph is interesting. It would be interesting to have an update on this old graph to see what has happened since.

Here is a partial cycles listing from the Foundation of the Study of Cycles Website.

A “Letter from the Director”

To finish off this brief history of the 40s and 50s at the Foundation, here is a portion of the “Letter from the Director” written by Dewey in the inaugural issue of Cycles magazine in 1950:

In Notes for an Autobiography, Albert Einstein, speaking of wonder, said “…. as a child of four or five years….my father showed me a compass. That the needle behaved in such a determined way did not at all fit into the nature of events which could find a place in the world of cause and effect connected with direct ‘touch.’”

“This experience made a deep and lasting impression upon me. Something deeply hidden had to be behind things.”

Something of Einstein’s wonder and curiosity came over me, when as a boy, I first saw iron filings on a sheet of paper conform to the ‘lines of force’ of a magnet held underneath.

It is this same “determined way” in which many phenomena fluctuate with rhythm that tells us that “something deeply hidden has to be behind things.“ It increases our wonder when we see a number of phenomena all fluctuating with the same wave-length, and with turning points coming at or about the same time. These behaviors arouse our curiosity in regard to what are the deeply hidden “somethings” involved. It is this curiosity that drives forward the student of cycles, – this curiosity and a compulsion that makes it impossible for him to put down his task until he has solved at least a part of the riddle.

Cycles appear all through the markets internationally in all time frames. You just have to be able to identify them and this is where our software comes in. It’s taken almost a century to get to this point, but this still new Science of Cycles is growing rapidly in sophistication and value to not only traders, but citizens of  the entire world.

This brings us up to today. Here’s a long range view of the DOW and what we’re expecting in the near future.