The SP500—About Five Miles Out

I’ve maintained for several years that this final wave up in the US indices is a corrective wave. It simply cannot be motive, as it breaks too many Elliott wave rules. But I see so many disregarding the obvious, which is the main issue I have with all the “pretenders”: They don’t pay attention to the details (the subwaves) and so we have all these incorrect counts out there from people who haven’t done the proper homework.

Analyzing markets using Elliott waves is an exercise in attention to subtleties. Below, I’ve placed a weekly chart and below that, an explanation of why this entire structure up from 2009 is a corrective wave.

Why is this important? Three reasons:

NOTE: The term “corrective” does not mean that this wave is correcting another wave. It’s rather an elliott wave term that 1) addresses the structure of the wave and 2) the fact that it’s moving against the larger trend. 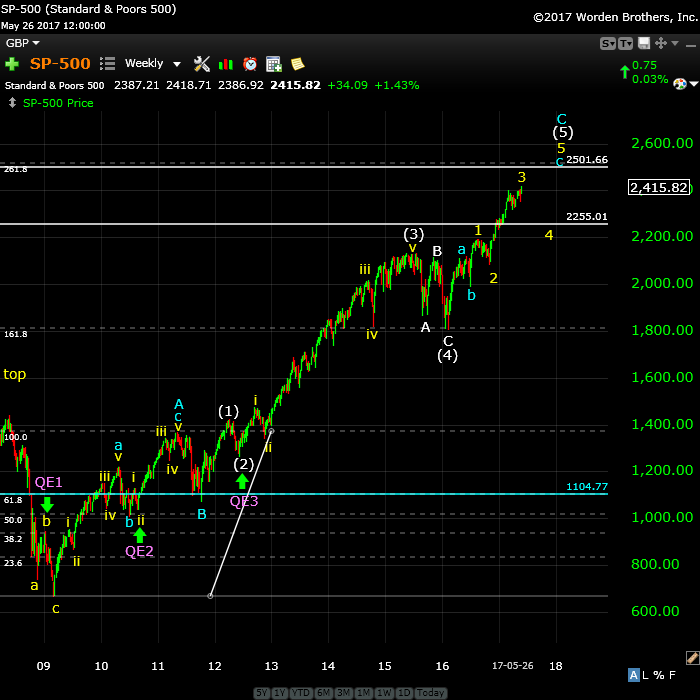 Above is the weekly chart of the SP500. I’ll take you through the important elements of this final wave up from 2009, moving more or less from the bottom up to the top.

QE 1, 2, 3: In purple, you’ll see the timing of the various quantitative easing (the Federal Reserve introducing cash into the system by buying mortgages, etc.). You can see the “bump” up in the market when they were added—fuel for the fire, as it were. In the case of QE1, it was set in place before the wave down in 2008 was complete. The result was that it shortened the wave, making the final 5 wave of that sequence only three waves. You can see that I’ve labelled yellow abc just below the green arrow. That meant the the entire wave down changed from motive to corrective—it was a subtle change that many of us did not catch when it happened (and many still haven’t clued into it).

The effect of that change to the final wave meant that in Elliott wave terms, it signalled that we would likely see a wave up from the bottom to new highs. To that same point, the blue horizontal line at 1104.77, marked the 62% retracement level of the 2007/8 wave down, which, if it had been motive, was where we expected the third wave down to occur. It began, but came down in three waves and headed right back up with QE2 kicking in.

Corrective Wave blue A: This is the most important wave of the entire wave, as it sets up whether the continuing wave up is going to be motive or corrective. Let’s review the reasons it’s a corrective structure:

Fibonacci Prediction for the Top: Knowing that we have a blue A wave in place means that the next major wave up will be a blue C wave (which is not complete yet).

In a corrective sequence, we’re typically able to measure the A wave and then expect the C wave to be either a fib ratio extension of that wave (in terms of length). Expectations are either for a C wave that is a measured extension of the A wave or alternatively, the C wave will be 1.618 or 2.618 times the A wave.

Wave white (4): To be considered a motive sequence, this wave should retrace 38% of the entire length from the bottom in 2009 to the top of wave (3). It doesn’t come close; it is way too short.

Wave white (5): This wave is also turning out to be corrective.

The wave up from the bottom of white circle four is a zigzag. That’s because:

Even one of these rules or guidelines being broken would have me questioning whether the wave up was motive or not. However, we have warning bells sounding right from the bottom up. So, the wave structure is clearly corrective.

Hopefully, I’ve given you lots to think about as we move haltingly to the top (in my calculations, it’s about five months away (“five miles out”)). Look to the September/October timeframe.

Above is the daily chart of ES (click to enlarge, as with any of my charts). I had to backtrack this week on a call made in this very difficult "corrective" market. What appears to be a third zigzag of the third wave (you can only have three patterns within a corrective wave—this third pattern starts at blue X on the chart) has continued slightly higher and now looks to be building a very large expanded flat at the top of the circle red third wave. The analysis was confused by an earlier, smaller flat (May 16), which resulted in a down wave of five waves (the uppermost b wave down on the chart).  Five waves down would normally follow-through to a zigzag to the downside.

A teachable moment ... lol: In retrospect, that final wave of last week's flat (5 subwaves down) must not be considered the beginning of a zigzag; it must be kept within the confines of the flat (3-3-5 configuration) and once done, it would need to completely retrace. To recap, the last wave of the flat last week was an ending wave of 5, rather than a beginning wave of 5. It can't be both.

In any case, my original target for this third wave was 2410-15, and we've now exceeded it by one point. That's a head's up as to the importance of fibonacci ratios in all markets. They affect just about every wave, in my experience.

This market, being such a "one-time-wonder," is rife with lessons one could only get from a major corrective ending wave, which we have never seen before (markets usually end in motive wave patterns; however, that's not the situation here). We have circle red wave three ending in overlapping waves: That's corrective (as I've maintained for months now).

As well, there was the non-confirmation between some of the US indices. The SP500 has previously gone to a new high, while the NYSE and DOW had not. While others thought that this non-confirmation was OK, the market has proved once again that it is not, as all the major indices are slowly reaching up to exceed their previous highs. Both these indices are likely tracing out flats as well (most likely regular flats, as opposed to the "extended" type).

I have always maintained that once one index tops, they all have to (so that they stay in sync). I had let that personal guideline slip from my analysis, wherein it should have been a big red flat (and something for you to keep in mind for future). I've not seen it fail yet.

For this reason, I look at multiple indices before committing to a direction, or turn.

Summary: We're completing the third wave in ES with a possible expanded flat. Look for a turn down early next week.