Non-Confirmation: Looking Ahead to the Top

Major tops are difficult things to analyze. They’re open to volatility (they’re always low volume affairs) and there’s usually non-confirmation between indices. In other words, some indices can trace out different patterns than others. However, they all need to eventually top in their own ways.

It’s a bit like herding cats, as these different indices may not move together to their targets, but will end up reaching them to finish their respective patterns one way or another.

A case in point for non-confirmations is the situation I’m seeing with the NDX and the SP500: They have different wave structures. 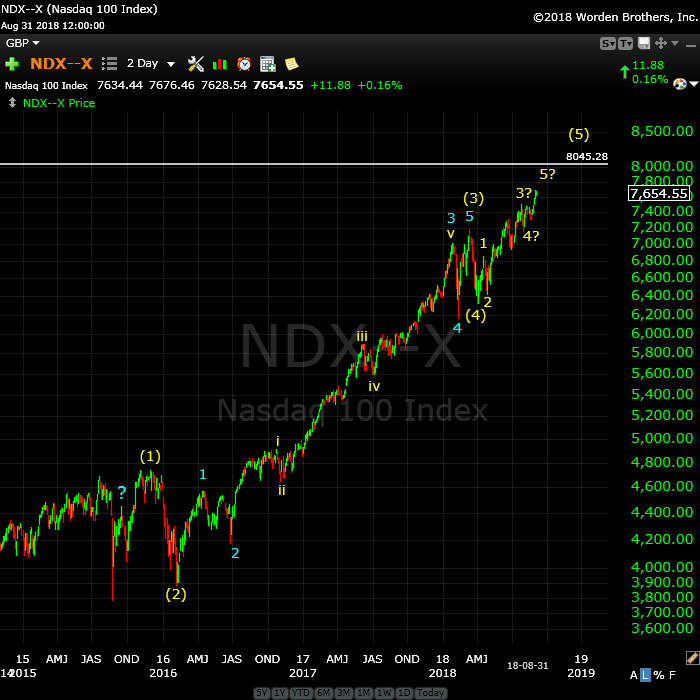 This final wave up (depicted in this chart) looks to be impulsive. This is an almost classic impulsive structure, with one exception: Wave yellow (1) has a three wave move up (identified by the blue question mark). This tells me the wave is in three waves, or we have a 1-2, 1-2 arrangement.

A three wave move would negate the impulsive wave. However, that seems to me to be somewhat unrealistic due to the otherwise textbook look to the wave. The fibonacci measurements also suggest an impulsive wave.

In Elliott Wave, you can’t ignore a wave (why many pretenders often have improper counts); every wave has to be counted. So we need to pay attention to the possibility we’ll see an additional 4th/5th wave combination at the top end of the entire move (as waves are typically symmetrical, in that they’ll have to same number of waves at the bottom as at the top).

What this means is that we may have an additional, small four-five combination still to go at the top end. That’s a bit of a wild card.

Otherwise, we’re nearing the top of the final fifth wave. My measurements suggest the area of 8045 for a potential top.

In the shorter term, we may be finishing the third wave of the fifth and require a larger fourth wave down and then a fifth wave up to a new high to finish the 500 year rally. There could be a little surprise, as well, based up on that additional small wave that makes up the current yellow (1) wave.

The fourth wave usually drops to the previous fourth wave (of one lesser degree of trend), so this suggests a wave down to the area of 6950 before a final fifth wave up to the ultimate new high.

The SP500 has a different wave pattern, however (the differences are subtle, if you’re not highly conversant in the Elliott Wave Principle. 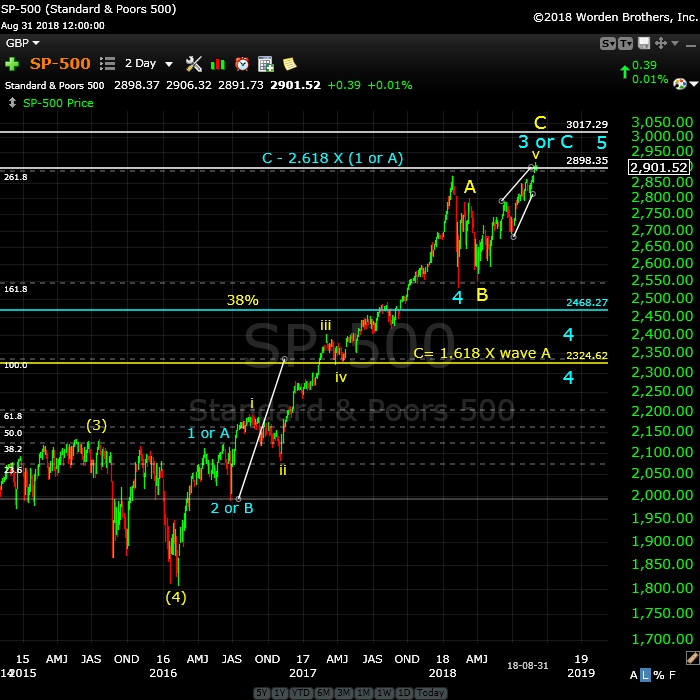 Above is the two day chart of the SP500 (similar to the chart of NDX).

This wave up appears to be a corrective five-waver. The fibonacci measurements also suggest we have a corrective wave here, and, of course, I’ve labelled the entire wave up from 2009 as corrective (in previous blog posts).

The features that identify this wave up as corrective are:

So the SP500 and NDX have completely different patterns playing out at the top. They will likely continue to move somewhat in step with each other but the patterns are expected to be quite different.

Both indices look like they have one more major wave to the downside and a final wave up to end the trend. However, the wave down for the SP500 looks like it may be much deeper than for the NDX.

While I believe we have a flat setting up in the SP500 (and ES), the NDX looks like it may have a fourth wave of an impulsive pattern to the downside as the next major move. This may limit downside of the SP500 (I don’t know), but it could lend creedence to the running flat idea (which is very rare, but must be considered going forward.

In any event, while we’re at a potential top, we need to display lots of caution in how these final waves play out. I don’t think we’re very far from a final high in either price or time. The market will be the ultimate judge and executioner, of course.

Small changes from last week. Because if the additional rise, the option of a regular flat has been negated.

My preference is for this unfolding fourth wave pattern is that of a expanded flat. A description of an expanded flat is here. However, technically, it could also be a running flat. At the present time, the B wave (that's the ABC wave up from about 2532) is longer than the A wave (marked as the 4th wave down from January 29, 2018). A regular flat registers as an expanded flat when the B wave is over 105% of the length of the A wave—ie, the B wave would need to reach above 2889, which is has done.