The historic levels of optimism this week brought to mind one of Prince’s best-known songs: 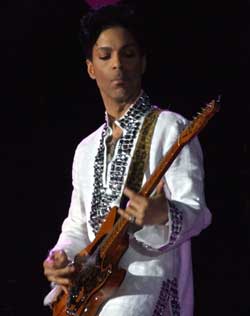 “I was dreamin’ when I wrote this, so sue me if I go too fast
But life is just a party and parties weren’t meant to last
War is all around us, my mind says prepare to fight
So if I gotta die I’m gonna listen to my body tonight

We have levels of optimism this weekend that are at historic levels.

The Market Vane Bullish Consensus poll of newspaper writers has a five day average reading of 70%. This is the highest reading since June, 2007 (the top of the market before the so called “Great Recession” drop of 2007/8).

Successful traders are contrarians. These are extreme readings, consistent with a major top.They’ll no doubt go higher before this entire rally is done, but these readings are good enough for the top of an historic third wave rally. Look out below.

Looking for a Top

Above is the 60 minute chart of ES (emini SP500 futures) from Friday, July 14, 2017. That weekend, in this blog post, I predicted a top possibly in hours rather than several days. I posted this chart for my Trader’s Gold subscribers with a target of 2466, but cautioned that if the fifth of the fifth went to full length (1.618 X the length of wave i), it would top out at 2476. I was a little off on my timing, as we didn’t actually reach the high of 2476 until this past Thursday. But we turned back down at exactly 2476 and have not gone to a new high.

I had also predicted a new high of at least 5910 for NQ (Nasdaq emini futures) and that it was the one to watch, because it would signal the top of the wave in ES, as well. We’ve reached a new high in NQ. In fact, all major US indices have now reached a new high, which was a requirement for a top. It isn’t a signal for a new top, but a new top is required to “zero out” the jumble of waves near the top and allow the indices to start with a clean slate. A clear set of 5 waves down is a requirement for a continuing large correction (unless it’s a triangle that’s forming).

I had also cautioned my subscribers that the triangle shown near the bottom of the chart (red circle) may turn out  to be a first wave instead of a triangle and that this might end up giving us an additional fourth/fifth wave combination to a new high. That caution had additional weight due to the fact that NQ also had an attempt at a triangle at the same position, but it was incomplete. Therefore the structure of the final waves up in NQ and ES didn’t match. This is why it’s SO IMPORTANT to look at multiple indices because more often than not, any inconsistencies will give a clue as to what the market is actually doing underneath all the noise.

Here’s the same chart that was part of the Chart Show on Wednesday, July 19 when it was obvious that we were going to a high of 2467.

However, in the aftermath of that top, it’s also become obvious that the triangle is a fake-out (red circle). It’s indeed part of a 1-2, 1-2 combination. That means we have one more fourth wave to go this weekend (possibly a bottom Monday morning) leading to a new high this coming week. That will end the extraordinary run of the higher degree third wave up (shown on the daily chart below).

So, while my timing might have been off, the wave structure is warning of an impending top, along with market sentiment, which is at extremes.

A large corrective move is on deck and will affect the US indices and the US dollar at the same time.

Above is the daily chart of ES (click to enlarge, as with any of my charts). Last week, I predicted a turn down at the beginning of the week at a target of 2475/6 (with a fully extended fifth wave). The turn at that level happened, but it took until later in the week, of course.

However, the market made it very obvious we're not quite done with this third wave. All boats have risen to a new high, but the market has signalled one more wave up ... and this is across most currency pairs and US indices and futures.

The USD currency pairs are still in various stages of topping/bottoming. The currency pairs continue to be near targets, but those targets, for the most part, have changed slightly this weekend. We're near a top, but we still have one more wave to go.

I've labelled the subwaves of the final wave up in the chart above so that you can see the challenge with analysis of a market that keeps telling me it's corrective. There are two many waves in the final wave subwaves and the only way I can make it work at the moment is to consider the first wave up as a wave in 3 subwaves (that's the underlying structure). So that means we have completed a third zigzag, which confirms my overall labelling of the entire move up from February, 2015 as a corrective pattern.

NOTE:  There's a Fed meeting this week with an announcement expected at 2pm EST on Wednesday, July 26. This may be a market mover.

Summary: We have one more rally to a new high to go before we drop into the fourth wave.