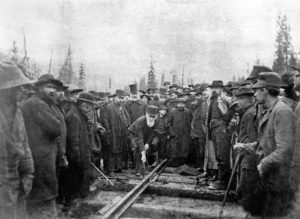 The “Last Spike” refers to the culmination of the building of Canada’s national railroad right across the country. It united the country by making travel across it infinitely easier than it ever had been before. The development of the railroad business led to an economic boom in both the US and Canada.

“The driving of the last spike may have been the great symbolic act of Canada’s first century, but it was actually a gloomy spectacle. The cash-starved Canadian Pacific Railway (CPR) couldn’t afford a splashy celebration, and so only a handful of dignitaries and company men convened on the dull, grey morning of 7 November 1885 to celebrate the completion of the transcontinental railway.”

It’s interesting to me that there are two stories surrounding the driving into the ground of the last spike. There as the official ceremony of the executive team (all for show) and the behind-the-scenes story, involving discrimination, racism, and extremely hard treatment of the workers overall. Fake news.

Fake news seems to be a phenomenon of market tops: Cycle tops tend to have lots of similar societal effects. You always find the highest building and largest construction projects culminate (or are suspended) as market tops.

“At the extremes, the herd is always wrong. One should not under estimate its capacity for stupidity.”—The Secret Life of Real Estate, Phil Anderson,  p 329

The Last Spike ceremony marked the top of the market at that time in both the US and Canada.

Wikipedia: “Like the Long Depression that preceded it, the recession of 1882–85 was more of a price depression than a production depression. From 1879 to 1882, there had been a boom in railroad construction which came to an end, resulting in a decline in both railroad construction and in related industries, particularly iron and steel.[24] A major economic event during the recession was the Panic of 1884.”

We are in the last spike of this incessant bull market.

The last spike of markets around the world (the final five-wave rally we’ve now entered) will have an opposite effect on society. It will divide society to a degree we haven’t seen in five hundred years. In the coming decades, we’ll witness a complete breakdown in society. There will be a civil war in the US. Climate around the world will start to get colder and dryer. There will be food shortages worldwide. We’re going to see pandemics spread from their incubators (eg- the Black Plague in Madagascar) to affect areas now considered safe. The financial system will break down with hundreds of banks  going under, credit will freeze up, government services will cease to exist in many jurisdictions. We’re going enter a period of spiralling deflation, which I’m explained here many time before.

To that end, this week I’m updating my “Navigating the Crash” webinar presentation and will be scheduling for the week after US Thanksgiving. I’m also putting together a webinar on basic Elliott Wave. More info on both to come next weekend.

Above is the 60 minute chart of ES (e-mini futures). This is the hourly chart I provided here last weekend, projecting a drop in a C wave to 2563 and an immediate turn up to a new high. I had also cited the fact that we’ve gone sideways for approximately 3 weeks (the purple lines and circles on the chart).

Above is the same chart, same time frame, from my posting to my Trader’s Gold group on Wednesday evening, Nov. 15. This showed we’d achieved the goal and had turned up with an impulsive first wave and a second wave down that had retraced exactly 62% before bouncing into what would be an impulsive third wave.

Now, my target for the drop was 2563, which would have achieved a double bottom. We dropped a little bit lower, to 2555, where the C wave down was then exactly equal in length to the A wave, a common fibonacci ratio.

There are other common wave relationship between the A wave and the C was of a corrective move. They are:

After the turn, I was projecting a final new high. That’s up next and will unfold across all the major US indices.

This is just one example of the power of Elliott Wave. I allows me to predict the market like this on a consistent basis, which provides a high degree of confidence in trades.

Whenever we get close to a major top in ES (emini futures), the comments start to flow predicting a top (or not). Usually these comments seem to come from those fixated one one index—the SP500. But, the market actually consists of more than one index, and the driver of the entire thing is the US dollar (the reserve currency).

I have always maintained that once one index tops, they all have to (so that they stay in sync). This is a “market rule.”

But it’s more than this that keeps the SP500 from not topping until the others top. The next wave down will have to start with five waves—across all US indices. So to get to the point where that can happen, the indices all need a “fresh start”—in other words, a new high.

The key, as I preach over and over again, is to watch the entire market, certainly indices that are related to each other. Both the SPX and DOW are subsets of the NYSE. They move more or less together. The wave structures have to be correct in order for the next wave down to start.

In all US indices (and USD currencies), we appear to have one more small wave up to go—ending in a major turn of just about everything associated with the US dollar.

Volume: Volume is expanding slightly as it does in a final wave to a top. RSI is already heading south, as we'd expect.

Summary: The count is full for NQ and ES, except for small subwaves that form the balance of a small fifth wave to the top. This final 5th wave up has to reach a new high, along with the rest of the major US indices ... and we're done. I'm looking at 2600 in ES as the potential final high (although the final wave could extend or compress)

Sign up for: The Chart Show (**cancelled this week)