The Long and Winding Road 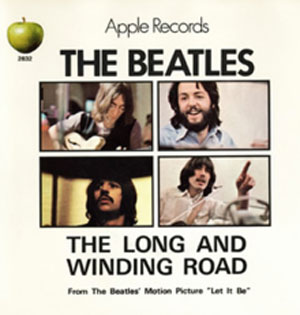 The Long and Winding Road

As I thought about the topping process and how all the asset classes i cover are gradually (painfully at times) meandering their way to a common top (common from a timing perspective), it led me to reflect on the bigger picture.

Below is a post that addresses the fact that topping is a process, but for major tops, there’s a certain synchronicity that happens; everything will find their respective Elliott Wave tops at the same time.

But, more than that, the entire Universe will come to the party. Bear with me as I explain.

The song title, “The Long and Winding Road” reflects on the path that these various asset classes are taking. Eventually, they’ll all end up at a logical turning point for each of them, but they often take the “scenic route” to get there.

That song was also the final number one hit for the Beatles (my favourite group) as they broke up in 1970, which also coincided with the top of the EW third wave, and a number of other remarkable historical events (see the DOW chart below). More importantly is the fact that it was also the top of a solar maximum (every 11.2 years), which is a phenomenon that always leads humans to create extraordinary events. For example, Woodstock happened in August of 1969 (an event I attended), and as we celebrate the fifty year anniversary, I’m feeling my age …

Every 100 year cycle has a golden age and the 1960s were that golden age for this most recent cycle. There was also a golden age in the early 1800s, with Beethoven and all his peers. They “rocked the music world” a little differently, and it came to an end with the 1835 depression, the largest depression in the United States at the time (but it was a worldwide event). Patterns and cycles repeat; they repeat based upon the influence of the planets.

1935 marked the top of a 172 year cycle as did 2007 (both years were fourteen years after the conjunction of Uranus and Neptune, with has culminated in a depression each conjunction throughout recorded history). Both conjunctions coincided with markedly colder weather here on Earth.

So … back to the top of the third wave in 1969/70. Right after the top, we went into an EW fourth wave and a recession. It also got demonstrably colder, a period (the 1970s) that brought with the emotional reaction of many who predicted a mini ice-age. Stories of the predicted climate downturn were all over the newspapers of the day.

This is going to be a brutally cold winder coming up and will also mark the top of the third wave of the US market. We’re going to see a really big drop in the SP500 to below 2100, and these drops always accompany a change in climate, interestingly enough. For example, 2007-8 was a very cold two year period.

The idea that we’re all part of one very large, (sometimes) happy family called “The Universe” is foreign to many, but over the coming years, I think it’s an idea that’s going to be accepted more and more. It gets more and more difficult to ignore as every year progresses.

That’s the work I do and I find it fascinating. I have much more to come on this subject over the coming years. 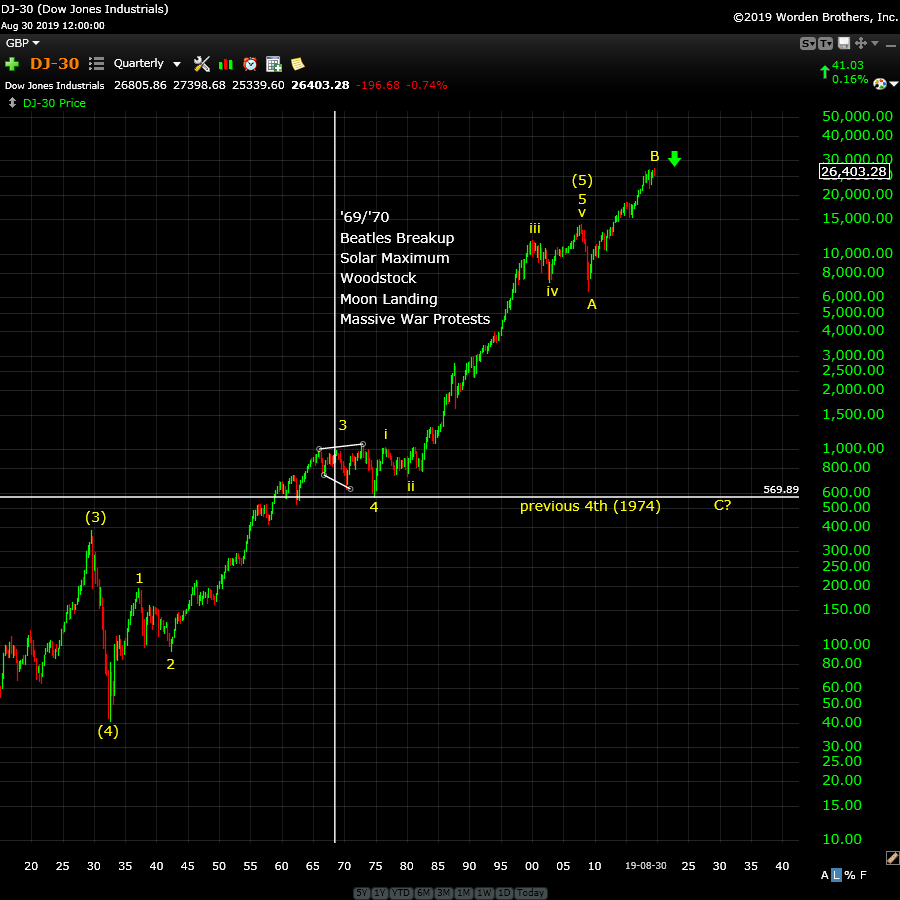 Above is the quarterly chart of the DOW from before the big drop in 1929 to today’s date. The top of the third wave of the current Elliott Wave cycle was arguable in 1969/70. It was also an 11.2 year solar maximum. Alexander Chizhevsky, who spent move of this life explaining their significance, identified a phenomenon that happens at solar maxiums, which he called “the excitability factor.” You’ll find more information on this effect in an older video post of mine here.

2001 was also a solar maximum and it’s responsible for the destruction of the World Trade Center (September 11, 2001) in the United States. You can think of these Sun-powered events as “Full Moons on steroids!” We’re affected by electromagnetic waves from our solar system, whether we want to admit to it, or not. 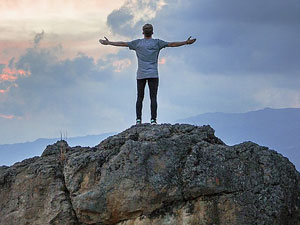 Tops Are Tough to Trade

For over three years now, I’ve talked about the “All the Same Market” phenomenon, where all the major asset classes are moving more or less in tandem towards a common top. That’s the big picture. They will continue to more or less move in parallet until we get to a final fifth wave top (the top of the 500 year cycle) in about a year or so … somewhere around the end of the year 2020.

Tops themselves (on a smaller scale), however, are different “animals.” The picture above shows how precarious a top can be. One false move can have a devastating affect. At tops there are opposing forces that are evenly matched playing opposite sides of the market, and the result can be quite unpredictable on smaller scale.

What’s happening is that the US Dollar index is in a triangle and the US indices are also in a triangle, so the range is quite small relative to what we’ve had to deal with over the past year. The triangle in ES is actually an ending diagonal, which is like a triangle, but the point is that it’s moving primarily horizontally over a range of  a little more than 200 points.

The US Dollar Index has been in a triangle for months. It’s in a running triangle, which moves mostly sideways to slightly up. What we’re seeing is oscillating wave patterns in a relatively small range. It means we’re probably in for volatility right up until we reach a top, which I think will be sometime this month.

Ending diagonals can be quite volatile (as we’ve seen) and more so when they get into the fourth and fifth wave. This volatility may also affect oil, gold, and silver.

So … my warning: This is likely to be a volatile, somewhat unpredictable market as we move towards are final top. That means DANGEROUS!. Be careful. The big move is going to come after the top. You want to be in a position to take advantage of it.

We've had a calm. bullish week this week, as expected. Even with the volatility of the week before, the ending diagonal remained intact across all the US indices, except IWM (the Russell 2000).

Note that the technicals are still quite supportive (RSI) of a further rally. That being the case, I'm sticking with the ending diagonal pattern for the reasons I outlined last week. Nothing has broken, although the wave structure is quite complex, even for an ending diagonal. I'll follow this pattern until something breaks; so far, the market hasn't done anything "wrong."

If we break to a new low below ES 2778, then something else is happening.

There are no rules inside ending diagonals, except for the fact that we expect so see zigzags. I place us at above the halfway point, with a target of an all-time new high for a third wave. We appear to be tracing out a zigzag, but where we are exactly within the subwaves is not clear.

As I said a few weeks ago, I'm now looking towards mid-September for a top. If it's earlier, that would be great, but I don't think that'll be the case. The next Fed announcement is on the 17th.