The US Market — Stripped

The Market With No Clothes

We’re still waiting for my “cats” to herd.

My stray cats are still IWM (the Russell 2000) and the US Dollar currency pairs (which includes, of course, the US Dollar Index).

We’re much closer this weekend, but we still have a small gap to fill, particularly in the Russell 2000.

The herd is expecting all time new highs in the SP500 (and related emini futures). The problem with that approach still amounts to a fairly long list of probabilities against that happening. I’ve listed them previously, so I won’t go into them all here again.

There seems to be this penchant for newbie traders to just focus on one index and expecting it to do something none of the other indexes have a hope in achieving. As a trader, I learned very early on that this is most definitely NOT a good idea.

The NYSE is the exchange that all these traded sub-indexes fall under: It’s the “Mother Ship.” The NYSE is not traded directly, so you can count on it being devoid of the animal spirits in the sub-indices (the market with no clothes, if you like). In fact, it’s an aggregate of the other indices that are tradable.

These subindices are at different levels; some much higher than others, but the true picture is what the NYSE offers.

Also note that trade-futures.com recorded back-to-back days of 91% bulls last week. That suggests everybody’s “in.” Volume is exceptionally low. Currencies are close to a turn, oil is close to a turn, and gold and silver are poised to rise.

This is NOT a bullish scenario, as I’ve been saying for months now. We’re looking for a turn and a first wave down.

The Mother Ship: The NYSE 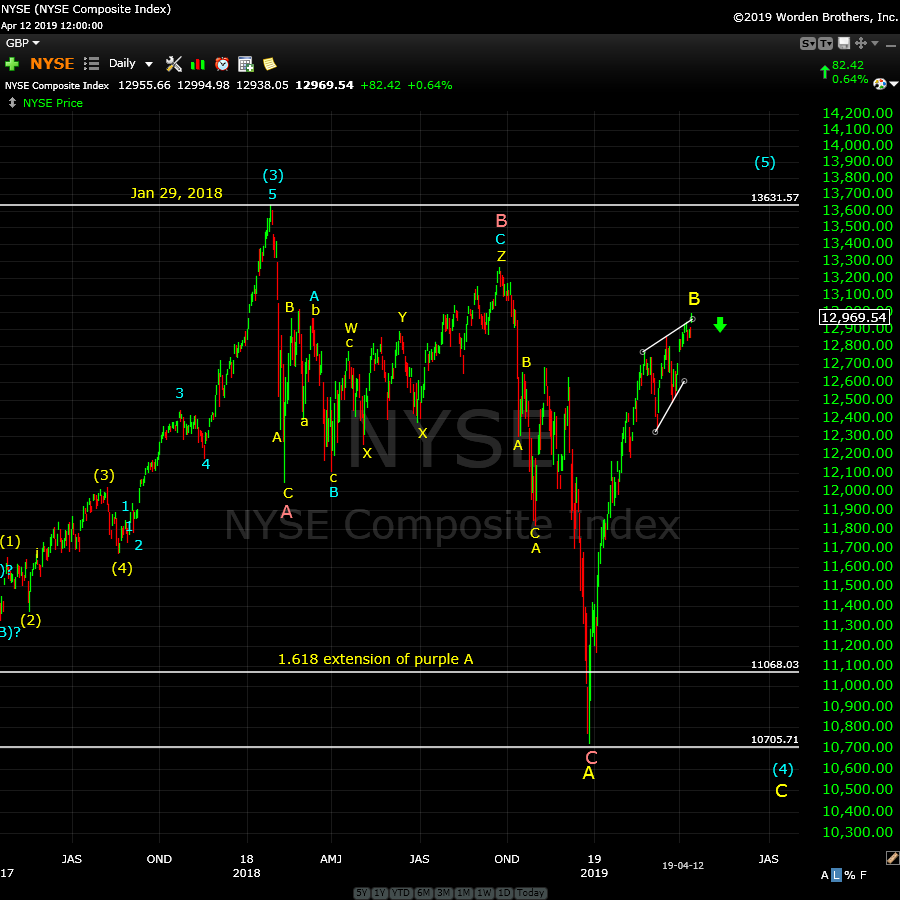 Above is the one hour chart of the NYSE. I refer to this exchange as “The Mother Ship” because it spawns the DOWS (Industrials and Transports), the SP500, The Russells, and the OEX.

But we are at an interim high and it shows in what’s happening outside the markets. Tiger wins the Masters, Assange gets dragged out of the embassy, Avenatti gets nailed: It’s like a full moon!

There's not much new in this report this weekend.

The DOW reached the required new high. IWM (Russell 2000) still needs a new interim highs before everything heads down in a dramatic capitulation. The US Dollar Index also has to complete its leg down before it turns up in earnest.

We appear to be in an ending diagonal in the SP500 and NQ. ES - a minimal new high to finish what appears to be an expanding triangle — we've been crawling along the  upper trendline for weeks now.

The next major move is to the downside (after the stragglers get to their targets).