The following pattern concepts come from The Elliott Wave Principle, by Frost & Prechter. I want to make it clear that my motive in unmasking these erroneous patterns is not to criticize or cause any undue pain. Sober second thought is always a good thing as is refining and “proving” beyond a doubt that the work of Ralph Emerson Elliott is the brilliant discovery that I feel it is. However, to be accepted eventually by the scientific community, the clarity, attention to detail, and weeding out any questionable concepts will only add to the larger goal.

(NOTE: You can click on the images on this page to expand the size)

Although there are a couple of paragraphs and diagrams in the Elliott Wave Principle devoted to describing this pattern, I’ve never seen one and neither has anyone I’ve talked with. It seems to have been added in the fourth printing of the book.

On closer examination of the actual waves that correspond to the date identified on the diagram in the book, it turns out that the example is not a leading diagonal, and in fact, the entire pattern failed and went to a new low below the starting point of the supposed leading diagonal. 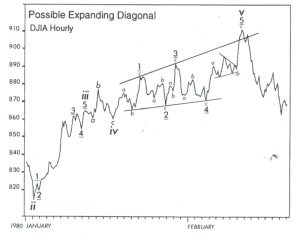 “To begin with, diagonal triangles are very rare. Unless the market traces out at least four waves of a diagonal , it is best to exclude it as an option. We never reached such a point. A few weeks into February, one had to abandon this count because wave three of the presumed diagonal was then longer than wave one, and R.N. Elliott never illustrated a diagonal triangle showing a third wave longer than the first. The possibly valid, tentatively proposed expanding diagonal (see text, p.37, The Elliott Wave Principle) will have a longer third wave, but, as far as I know, there is only one instance of its occurrence in the DJIA (see Figure 1-19, The Elliott Wave Principle), so the form is either non-existent or so rare that, while one may resort to it after the fact if all other wave considerations compel this labeling, to postulate one before such a time is irresponsible.”

I personally think Bob has done a disservice to Elliott by adding material to The Elliott Wave Principle that was not in Elliott’s original work and not 100% proven. In fact, I’m starting to get more vocal about it. I will still mention ending expanding diagonals, but with a warning that nobody has ever seen one. His diagram in the book (mentioned above) is not a valid example as it wasn’t a fifth wave, and in fact appears to be part of second wave corrective wave in 1980. He apparently flagged and drew it out in real time …

I have stopped referring to Leading Diagonals, which Bob also invented, but which has no actual example and in fact, nobody has ever seen one  of these, either! 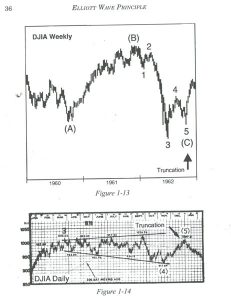 My journey down the truncation path began on December 29, 2015, with a large second wave top that started down as a ‘3.’ For quite some time as it kept dropping, I thought it must be a “truncation.” After all, the “Elliott Wave Principle” spends a good page describing truncations and provides a couple of charts (Figures 1-13 and 1-14) from the daily DJIA. However, it wasn’t a truncation; it was the B wave of a large 3 wave possible flat (still in progress as I write this).

Elliott wave analysis is really all about removing less probable patterns from a short list to determine the operative pattern of the moment. Had I known there was no such thing as a truncation, I would have had a much better chance of deciphering what that wave was going to do (and how it fit into the overall picture).

Shortly after that experience, I began to do some sleuthing. I went back to the dates of the charts on the Principle book and analyzed the wave structure of each one. As it turns out, neither one is a bonafide truncation. It’s simply rather sloppy work at analysis.

The “truncation” label is a Prechter/Frost invention. Elliott talked about a fifth wave failure, but again, there’s no proof of it anywhere. No real example has been provided anywhere.

So, as in other the other cases explored here, this is a another concept in EW that doesn’t seem to exist.