Where to Get In

I’ve been asked a number of times what to expect after a major top. “Where’s the best place to get in?” 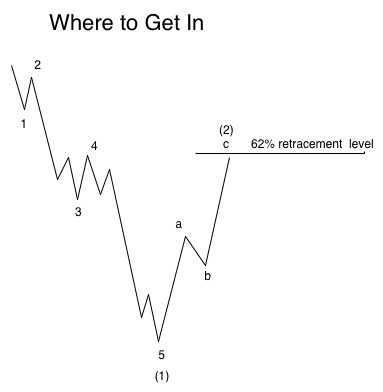 On the left is a diagram of a typical first wave down in a bear market. It’s a motive wave with 5 waves. The wave relationships should look very much like the diagram in terms of relative lengths.

After the end of the first wave of five waves down, there’s a 3 wave correction (a second wave) which will retrace 62%. (Use your fibonacci retracement tool to measure from the top of the first wave down to the bottom.)

This is the ideal place to go short as the next wave down is a third wave. The third wave will be at least 1.618 times the length of the first wave down, so risk to reward at this point is excellent.

If the the second wave does not stop and continues upward (if it passes the 76% fibonacci level), the likelihood is that it will travel back to the top and you do not have a motive 5 waves down from the top.

I also see traders who absolutely have to get in right at the top. It’s the most dangerous place to get in, as you can’t tell if it’s the top or not.