Are You Smarter than a Central Banker?

There’s a broad belief in the marketplace that the economy is “coming back” from a major recession. Nothing could be further from the truth.

However, the propaganda is non-stop, primarily from government sources. Governments, of course, have a vested interest in instilling confidence in the herd. In vibrant economies, the government in power gets re-elected. On the other hand, we “throw the bums out” in a recession. The fact is, they have little to do with how the economy moves on a short term basis (of a few years), but the public tends to think otherwise.

The truth is that the world economically is not OK—governments the world over are much further in debt than in 2007, market participants are far more leveraged, and the middle class is buried under more household debt than ever before.

We’re living through the largest debt bubble in history and it’s world-wide.

Most of the blame can be laid at the feet of successive governments who, for decades, have been spending our money like drunken sailors. Then there are the central bankers (notably, the Federal Reserve in the US and the European Central Bank), who collectively have manipulated the economy to the point that we’ve got the largest debt bubble in history to contend with and it’s very close to bursting. Here’s a link to the debt levels of major countries around the world. 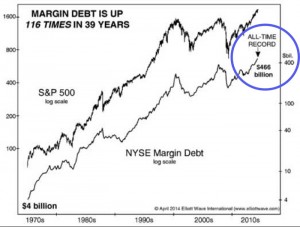 Not only are corporations and countries over-leveraged, but investors are too. Margin debt is at an all time high.

Margin debt is borrowed money for investments. For example, in the stock market, when you buy stocks, you might put up half and your broker will lend you an equal amount. Great if the stock goes up, but if it drops, you’re liable for your loss plus the borrowed money.

We’re at record highs in margin debt right now—much higher than at the 2007 top. It means that if this market comes down quickly, there will be very large losses.

Optimism is at All Time Highs! 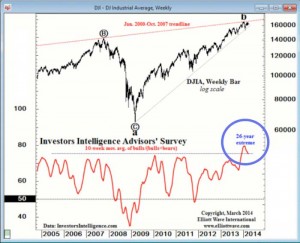 But wait a minute, investor optimism is at an all-time high! Things must be getting better!

That’s right, investor optimism has gone through the roof. What that typically means is that investors are “all in.” They’ve done well and they believe this bubble will never end. They believe central banks will keep everything just ticking along. However, central banks are running out of tools.

To a stock trader (and contrarian), historically high optimism is one of the biggest warning signs that the direction of the market is going to change. We watch optimism and pessimism readings regularly and they’re one of the most accurate signs of an upcoming trend change. They’re at their highest levels in history right now—even higher than at the 2007 top!

Let’s drill down and take a look at what’s really going on under the smiling faces and promises of prosperity: 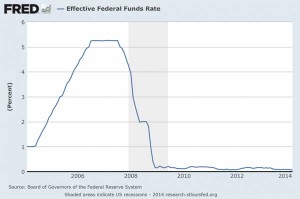 Central banks (like the Federal Reserve in the US) typically control inflation in the economy through setting interest rates. They feel comfortable with an inflation rate above two percent.

Inflation is not good for the general public, as assets rise in price, while the value of currency is degraded. However, inflation gives everyone a sense that they’re getting wealthier if they’re assets (a house, for example) is increasing in value over time. Governments love inflation.

However, when inflation over-heats, central banks typically raise rates, which has the effect of lowering inflation. However, for the past few years, we’ve had the opposite problem. Inflation has consistently been under 2% and so the banks have had to lower interest rates. The problem is that it’s having no affect.

What they’re concerned about is deflation. Deflation is good if you have lots of cash, because assets go down in price (currency becomes higher in value). If you have major assets and lots of debt, that’s bad. Your debt won’t typically equal the value of your assets and so banks foreclose, or call the loan.

When deflation sets in, it can easily spiral out of control. People lose homes and jobs, spending stops, the market crashes, and we go into a depression. We’re sitting on the edge of this scenario and central banks are hoping and praying that something magical happens and that the economy picks up on its own.

Printing Debt
The other tool the central banks have is the ability to “print currency.” What they’re really doing is printing debt. This is the basis for the most recent “quantitative easing” that the US Federal Reserve has undertaken. Their objective is to get more money into the banking system to get the banks to lend, which they hope will revive the economy.

When the housing bubble crashed in 2007 due to the low interest rates the Fed itself created, it left in its wake a pile of bad mortgages. The Fed then bought up the bad mortgage-backed securities with magically produced fiat currency. The bank gets the currency and the Fed gets the mortgages (as per my animated segment in the video). Quantitative easing is coming to an end this fall, as the Fed is now over $4 trillion in debt. It hasn’t worked.

And this brings us back to the problem. The economy isn’t strengthened, but the stock market goes up … and up … and up. Banks these days are allowed to invest the both your money and this new found currency from the bad mortgages. We have a house of cards.

A colossal mess … brought to you by your favourite central bankers.

The Fractional Reserve Banking Ponzi Scheme
Most people are unaware of how unstable the banking system really is. It’s because of a system based on fractional reserve banking. This allows banks to use our money as their own, lending it out, and only keeping a very small fraction on hand for the small number of people taking their money out on a daily basis. In Canada, where I live, the banks don’t actually have to keep any of our money on hand. So, if there’s a run on the bank during a deflationary period, banks tend to go under and depositors lose everything. We need to change this system. It’s a Ponzi Scheme. It’s not much better in other countries.

What do Cycles Have to Do with It?
Our ancestors have been through this same scenario many times before. In fact, every 172 years, we have a major depression, stock market crash, and epidemic.

You can go back from 2007 to 1835 (172 years) to the largest depression of the 19th century in the US. Then take another trip back a further 172 years to 1663—a depression in the United Kingdom, followed by the Blubonic Plague the next year, and the Fire of London the year after that. We don’t learn from history (sigh).

The Bottom Line
It doesn’t take a whole bunch of smarts to figure out that we’ve got a gigantic problem on our hands with no simple solution.

So … my question. Are you smarter than a central banker? I sure hope so.

Because, if this house of cards falls apart, you’re going to need to be to keep what you’ve amassed and indeed prosper over the coming years.