The Elliott Wave Principle and Probability

The Elliott Wave Principle is a theory based upon probability. A common definition of “probable” is “a reasonable amount of suspicion, supported by circumstances sufficiently strong to justify a prudent and cautious person’s belief that certain facts are true.”

There’s a very good dose of science in it. The patterns repeat over and over again: In motive markets, they move in the same order, in corrective markets, not so much, but there are still rules that cannot be broken. Fibonacci ratios run all through the market and this is another scientific aspect of Elliott waves.

So the secret to success is to determine the current wave count, and based upon the rules of how waves have historically moved (the consistent cycles that play out in an extremely accurate manner), determine the next probable move. There are many times that multiple possibilities are on the table, however, more often than not, the signs are very clear as to the current position of the market within the wave structure. Using fibonacci measurements, both the direction and the target for a move often rise to a level of very high probability. It’s seldom there is more than one “correct count,” in my experience.

The weak link is the analyst and his/her ability to analyze wave patterns and structure. The successful analyst must not inject subjective thought into the wave structure. It’s critical to analyze patterns down several degrees of trend to truly account for wave structure. Most waves have pre-defined targets they must hit in order to confirm the count. Most analysts I know of do not do the work (or don’t understand the finer requirements of certain patterns) to definitively reduce the risk of an ultimate “call” being incorrect. This is the major problem with Elliott waves—not the principle itself, but the lack of skill of the analyst (or the lack of attention to detail).

The count has not changed in ES/SPX. We’re waiting for the top of the third wave. It’s very close.

We’re jumping through a series of hoops as the US dollar finds a turn point. Everything hinges on what the dollar does. It’s the reserve currency (still) and it will determine the overall economic conditions. As the dollar bottoms, we have a bit of reflation happening. As it turns and heads up, we’ll see deflation finally take hold. Deflation always wins; it has throughout history with no exception.

As I’ve written before many times, as the value of the reserve currency rises, it leads to deflation. The dollar for the past few months has been a particularly easy asset to analyze (at least, for me). 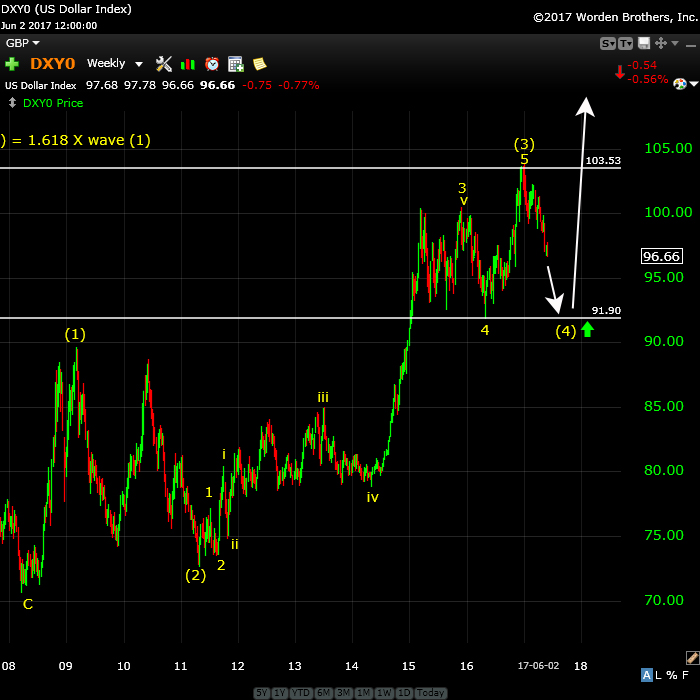 Above is the weekly chart of the US dollar. I had called the obvious top at ~103.53 and projected the drop to the previous 4th wave low of one lesser degree. I’m projecting that point to also be the top of the US indices. I’ve presented this before and the information was not well received. I was told there was no correlation. Well, there is, has been, and will continue to be.

It’s only logical that all the assets that have been moving in more or less in tandem (after all, they’re all related to each other by the US dollar!) for the past year and a half will reach a projected top (or bottom) all at the same time. I suggest you pay attention to that very obvious (and logical) phenomenon.

Last week, I summarized a very important aspect of this current top. Some of you “got it” (and we had subsequent clarification in comments back and forth) and some of you obviously didn’t. I’d even bolded the heading of the section:

As well, there was the non-confirmation between some of the US indices. The SP500 has previously gone to a new high, while the NYSE and DOW had not. While others thought that this non-confirmation was OK, the market has proved once again that it is not, as all the major indices are slowly reaching up to exceed their previous highs. Both these indices are likely tracing out flats as well (most likely regular flats, as opposed to the “extended” type).

I have always maintained that once one index tops, they all have to (so that they stay in sync). I had let that personal guideline slip from my analysis, wherein it should have been a big red flat (and something for you to keep in mind for future). I’ve not seen it fail yet.

This week, we completed this important step. We have one more to go:  a major turn of just about everything associated with the US dollar.

All the currency pairs will turn at the same time as the US indices for this fourth wave. Even Andy Pancholi has alluded to this, but he didn’t get the date correct. It is still to come. This is the final hurdle.

Dating of the Blog Posts

I complete the free blog posts on the weekend and do not update them during the week. Obviously, during the week, the information that the market imparts can change. My Traders Gold subscribers get the full story with targets and suggested action to take across the US indices, USD currency pairs, gold, silver, and oil.

This website is first and foremost a business. I do not provide the entire picture in the free blog post. My subscribers get a much fuller picture. But I suggest you read all of the blog post.

Fibonacci targets can change. If one is met, the market can reach for the next one. In the case of this past week, Traders Gold members had that additional target. I am not going to update mid-week changes in the free blog.

Above is the daily chart of ES (click to enlarge, as with any of my charts). The count has not changed appreciably. What appears to be a third zigzag of the third wave (you can only have three patterns within a corrective wave—this third pattern starts at blue X on the chart) has continued slightly higher and continues to build a potential very large expanded flat at the top of the circle red third wave. The top of this last wave has now formed what looks like an ending diagonal, and that is also very close to a top.

Last week, as I mentioned above, I warned that the DOW and NYSE still had to top. That step was completed this week. Now we're waiting for the USD currency pairs to hit their targets. Everything is going to turn at the same time. It takes time to turn around an ocean liner.

Summary: We're completing the third wave in ES with a possible expanded flat. Look* for a turn down this coming week.

* When I use the words "look for," it's the same as "watch for," as in "Watch for a tornado in the western plains area this afternoon. The conditions are right." It doesn't mean we're going to have a tornado, but you should be on the alert, just in case we do. It applies to my call for this week, as well. I'll leave you to debate the turn date, but the conditions are just about right for a turn. However, as I've stated above, the USD currencies must reach their targets as a pre-condition of the turn.