Interest Rates and the Great Depression 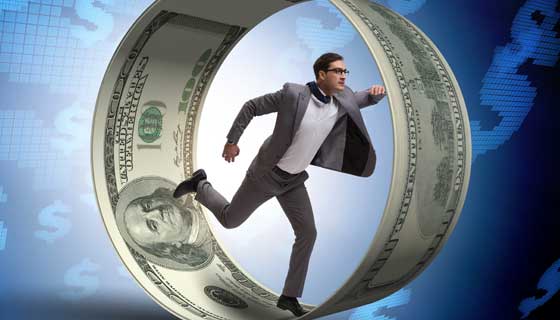 We’ve been here before. The current financial situation in the US is a repeat of the lead-up to the “Great Depression” of 2007-9. The only thing that’s different are the players. But because we don’t generally pay attention to history, few know that we keep doing the same things to ourselves over and over again, and we simply don’t learn from past mistakes.

Actually, it’s governments that fall prey to financiers, who always have their own self-serving reasons for setting up the financial ponzi-schemes that they do, as well as devaluing our money. This is a habit that governments have fallen into over and over again since the beginning of recorded history. Banksters are predatory individuals, an apparently innate trait that, with any amount of historical research, is virtually impossible to dispute.

There a Definition of Insanity that is bandied about and attributed to Albert Einstein, even though he insisted he never said it. It goes like this:

“The definition of insanity is doing the same thing over and over and expecting different results.” 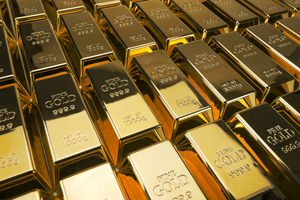 At the beginning of the Great Depression, all countries were tied together by the gold standard. If your country set interest rates higher than others, people would move their money to that country, as they’d get a better return (and speculators could always redeem their currency in American gold).  But at the same time, money in the country with low interest rates is “cheap” to borrow just as it is today in most countries (in fact, we’re involved in “currency wars,” with countries attempting to inflate their currencies to their own government’s advantage—not to the advantage of their citizens). Low interest rates lead to speculation in the stock market. It has throughout history.

We’re not on the gold standard any more, so the value of currencies fluctuate; they’re not tied together (fiat money allows government free reign to manipulate their currencies). Governments today notoriously inflate to reduce the value of their own money so that their  country’s products are less expensive on the international markets. In that way, they sell more, resulting in more money flowing into their country. (If you can lower the price of your products, you sell more and become more profitable).

In the late 1920s, there was a “deal” struck between the Bank of England and the Federal Reserve to keep US interest rates artificially low. As a result, US dollars were inexpensive to borrow and this fuelled speculation in the stock market, the same phenomenon we have today. However the difference between then and now was that most countries in the early 20th century were tied to the gold standard. Currencies could be redeemed in a certain amount of gold.

The specific problem in the 1920s was that England was concerned about their economy. The first World War has stripped Britain of much of its gold reserves. To build them back up, they made a deal with the US government to lower US interest rates so that investment money (and gold) would stream to the United Kingdom, seeking the higher rates.

Today, currency rates float (currencies are no longer pegged to the gold price), so international market forces have a much bigger influence on currency values.

In spite of the manipulation (high inflation) in the 1920s, US Treasury rates eventually started to sneak up, particularly in 1928 and this forced the Federal Reserve to raise rates.

The U.S. Treasury sells bonds at auction. It sets a fixed face value and interest rate for each bond. If there is a lot of demand for Treasurys, they will go to the highest bidder at a price above the face value. That decreases the yield, or the total return on investment. That’s because the bidder has to pay more for the bonds, but receives the same amount in return. In other words, the yield (or profit) to the buyer is less.

When there’s not much demand, then bond prices drop. Yields increase to compensate. That makes it more expensive to buy a home because mortgage interest rates rise. Buyers have to pay more for their mortgage, so they’re forced to buy a less expensive home. That makes builders lower home prices. Since home construction is a component of gross domestic product, then lower home prices slow economic growth.

Rising Treasury rates then can be deflationary (people don’t borrow when rates are high, which means there is less money in the economy). As rates rise in the market we’re currently in, at some point, the market is going to head south. What will that point be? That’s the big question.

On the other hand, in an economy that is faltering (that is already experiencing deflation—or the latest buzzword, like “disinflation”—anything to obfuscate the truth), money tends to seek safe havens. US treasury bonds are perceived as a safe haven in times of turmoil. They’re in greater demand even at low interest rates. Looking at the ten year treasuries chart below, it looks to me that rates are going lower.

Low yields on Treasurys mean lower rates on mortgages. Homebuyers can afford a larger home. The increased demand stimulates the real estate market. That boosts the economy. Lower rates also allow homeowners to afford a second mortgage. They’ll use that money for home improvements, or to purchase more consumer products. Both stimulate the economy. BUT when we get to a point of too much debt, fear starts to enter the equation. Under this scenario, expect a deflationary spiral and a market collapse. 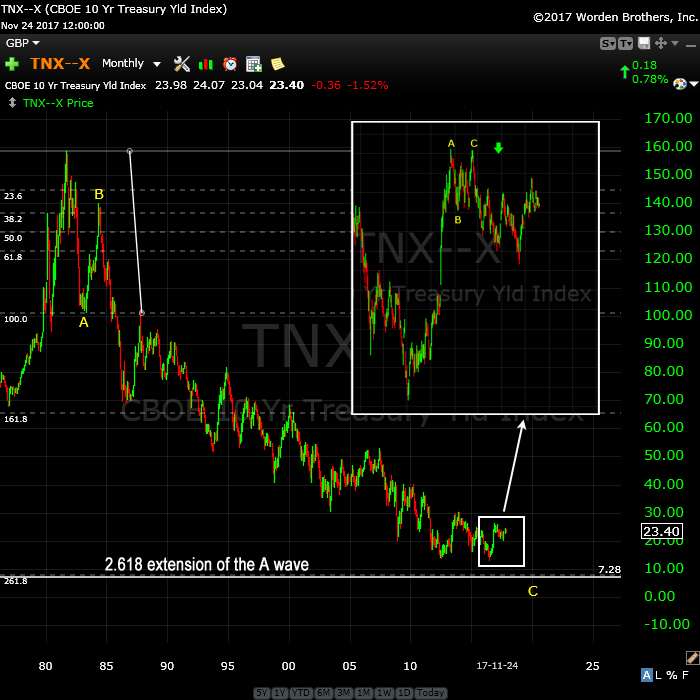 Above is the monthly chart of TNX (the 10 year Treasury yield). I’ve also included an inset of the current situation (from a two-day chart).

The two day chart shows a corrective wave in three subwaves. Corrective waves retrace completely. The 10 year rate is set to decrease. In fact, the fibonacci measurement from the A wave (an extension of 2.618, which is a typical C wave extension) predicts that the rate will fall to 7.28 (.728) before it will rebound. This is a scary situation. It speaks of a fearful market, one of no confidence, and little to no appetite for risk.

We’ve been here before, we’re here again now, and it’s just a matter of time until the larger market tops … and drops.