On Deck: Confirmation of a Top

A Change of Trend

It’s still early to call a top, based upon Elliott Wave methodology. However, here are some facts regarding Friday’s action:

AAPL has traced out an extended third wave and is poised to rally in a fourth wave of the first. TSLA turned down after a double-pronged second wave. FB turned down after spiking up in what looks like the final rally of an ending diagonal.

The wave structure of the USD currency pairs I follow don’t support a turn … yet. It looks like the US dollar has one more low to go before all the currency pairs turn. I would expect the turn here to happen as the second wave of the US indices reaches its high.

Oil looks to be topping. Gold and silver are heading down while USDJPY traces out an expected bounce. 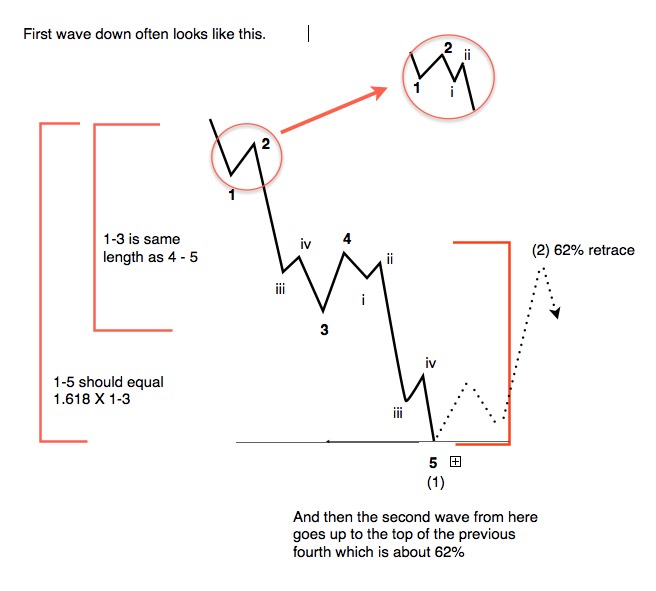 The above chart is not something you’ll find in the Elliott Wave Principle book. This is the typical configuration of a first impulsive wave down, with a second wave shown in dotted lines.

There are certain criteria that are critical in the determination of an impulsive first wave rather than a zigzag (a corrective wave):

The current wave down seems to meet the above requirements. However, a further determinant of a change in trend is the need for a second wave retracing at least 62% with a subsequent drop to a new low. This is what we’ll be watching for over the next ten days or so.

In this week’s Chart Show (links at the bottom of the post), I’ll be providing the targets for entry for the next phase … the 5 year (at least) bear market we seem to be entering. 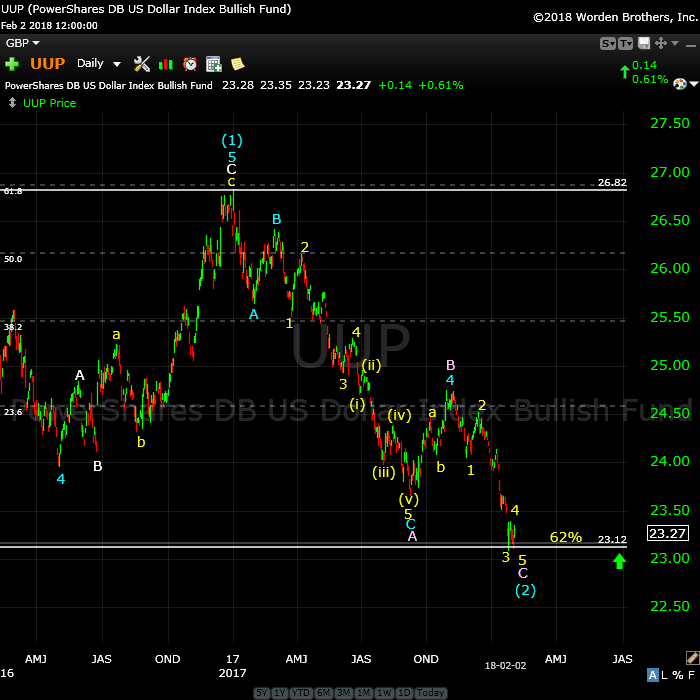 Last weekend, I wrote here that I was expecting a small yellow wave 4 and then a new low in a wave 5. We now have that pattern in place, but it doesn’t look quite complete yet, although very close. I’m expecting one more small final fifth wave down to conclude this trend, culminating in a turn up and leading eventually to a new high above 26.82 for UPP and a similar new high for the US Dollar.

The Tesla Train is Confirming a Trend Change 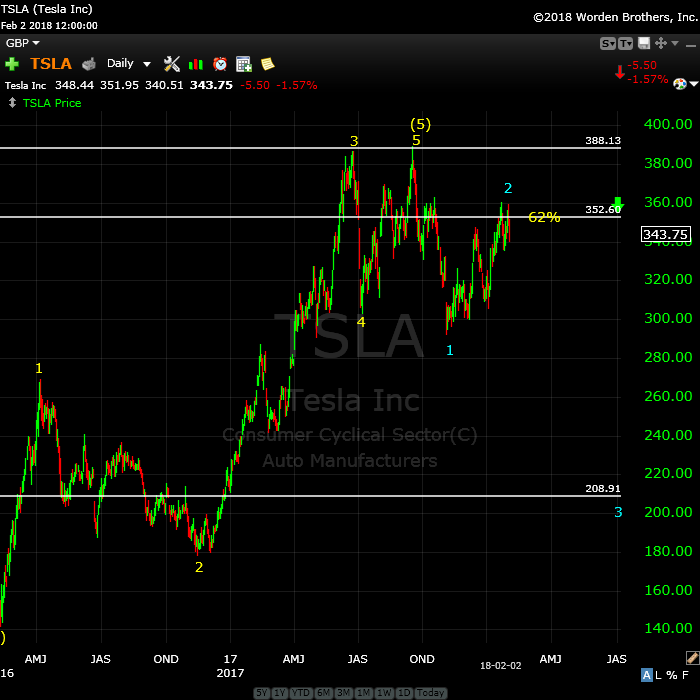 Above is the 2 day chart of Tesla, showing my prediction playing out. The top is not officially in here; we need a new low below ~290.00.

Last week, I suggested we’d head up in a “double-pronged” second wave, which is exactly what we’ve done. We’ve now potentially turned down into a third wave with a target in the 209 area.

There are potential variations to this pattern, but the ultiamate goal for a full first wave down should be below 140.00. (This includes the first and second waves already traced out, a large third wave down to about 209.00 and a further drop in a fourth and fifth wave.) 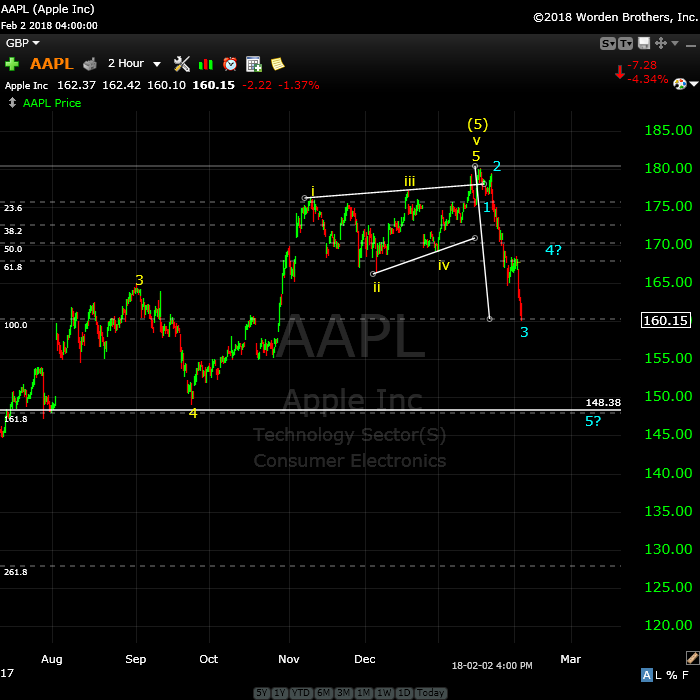 Last weekend, I identified a pending top here, with a third wave currently in progress. We’ve continued down in that third wave to the point where we have five waves down.

Expect and fourth wave bounce and then a drop to a new low. It looks like the target is indeed the 148.00 area, the same target I identified last week. 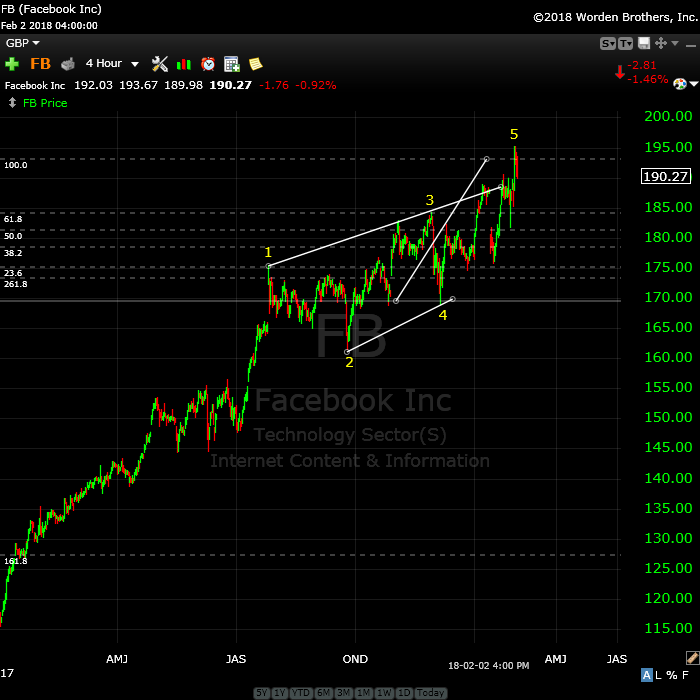 Above is the 4 hour chart of Facebook (one of the FANG stocks). This shows the final pattern I described last weekend, which is an ending diagonal. Ending diagonals gained that name because they form at the end of a trend. You can short a pattern like this when it drops below the lower trendline.

The bigger they are, the harder they fall. This is potentially the start of a first wave down, which should revert back to the beginning of the ending diagonal, the previous fourth wave, around the 145.00 area.

This last week, I had a big blow-up with my current hosting service (Bluehost). They have a bug on their server, but they refuse to acknowledge it. The WordPress code on my site doesn’t communicate with their php engine, which we’ve proven, BUT …

… so we’ll agree to disagree, and I’m forced to move the site to another hosting company, which should happen sometime this weekend.

My current site has been tested on the new server and it works just fine (as it does on two other servers we’ve tested it on). I’m hoping that the switch will be seamless, but if the site is down for a short period, that will be the reason.

As predicted, we reached the final high and have turned down with gusto! The methodology does not let me call a top yet, however. I'm waiting for a second wave and a successful drop from there to a new low.

We're still in the first wave down and I expect more downside this weekend to approximately 2730 (my lower prediction for a first wave low). Then look for a second wave probably starting Monday morning.

Summary: We've turned down across the US indices. I can't confirm a top yet, but early signs suggest an impulsive wave down in a typical first wave scenario.