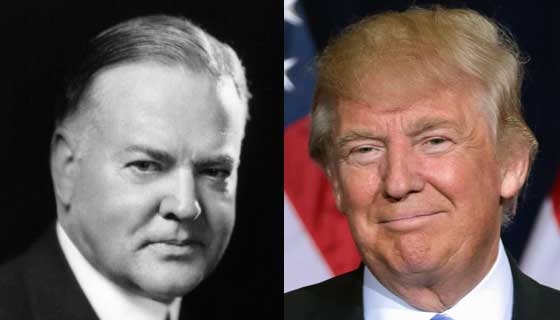 The Cycles that Begot Herbert Hoover and Donald Trump

Almost a year ago (October, 2017, we passed the 88th anniversary of the Crash of 1929. As we march towards the Crash of 2020, it’s interesting to look back at the similarities in politics and society. It’s downright eery!

Cue Herbert Hoover: A man in the wrong place at the wrong time, who got blamed for the Great Depression, although he had nothing to do with it.

Herbert Hoover was a populist president, as is Donald Trump. It’s amazing to me the similarities between these two men as well as for the periods in which they became president.

There are contrasts, as well—the biggest seems to be that Trump easily communicates with the general public, but Hoover on the other hand, was able to sway intellectuals with his arguments but was quite “distant” from the “average Joe.”

President Hoover was well aware of the impending financial collapse years before he actually ran for office. Several times, he attempted to get the banking community to raise interest rates to attempt to dampen the stock market frenzy. He was against the practice of inflating the US economy to help England, having real concerns for the damage it would eventually do to the US economy:

“Hoover raised his fears again two years later, after the Fed governors voted in July 1927 to lower interest rates despite robust economic performance. The policy was designed to prop up the principle economies of Europe, which were struggling to reinstate the prewar gold standard, and needed help to stem a drain of bullion to America but monetary ease in the US economy risked channeling funds into an already overheated domestic stock market.”—Herbert Hoover and the White House, Charles Rappleye

There are many other similarities with the present time (relating to Donald Trump). President Hoover had a rather dour relationship with the press, and was very sensitive to criticism:

“Observers of Mr. Hoover during and since his campaign are wondering how he will react to criticism, once the criticism begins. He has proven himself more sensitive to censure, since his nomination, then any man in public life.”—Fred Essary, Editor & Publisher, 1929

In fact similarities are so pervasive that they even relate to the inauguration speeches. On inauguration day, just after Hoover read the oath of office, Calvin Coolidge grasped his hand and gave him a warm smile. The crowd broke into applause and Hoover moved to the lectern to deliver his inauguration speech:

“As if beckoned by the ovation the misting drizzle gave way to a downpour. Umbrellas sprouted and the song fell into silence as Hoover delivered his address in strong, slightly metallic tones, his cadence flat and even. Rain spattered his face and soaked his clothes but Hoover did not falter.”—Herbert Hoover and White House, Charles Rappleye

If you remember, Trump’s inaugural speech, it started to rain just as he began.

Two days after his inauguration, Hoover met with the Federal Reserve. The warning bells from Wall Street were getting louder and louder. The current bull market is often attributed to the actions of Donald Trump (although he has nothing to do with it). Likewise, in 1929, the stock market was often referred to as the “Hoover Bull Market.”

“Speaking on March 6 (1929) the same day Hoover met with the officers of the Fed, Warburg warned that unless the gambling on stocks was throttled back,”The ultimate collapse is certain not only to affect the state Lee speculators themselves, but also to bring about a general depression involving the entire country.”—Herbert Hoover and the White House, Charles Rappleye

Several times, Hoover sent representatives to a group of New York bankers, in an attempt to get the Federal Reserve to raise interest rates to quell the out-of-control speculation in the stock market. The bankers refused to do anything.

“The New York bankers all scoffed at the idea of the market was not ‘sound,'” Hoover wrote icily in his memoirs, “They were certain that this was a ‘New Era,’ to which old economic experience did not apply.”—Herbert Hoover and the White House, Charles Rappleye

Once the crash had begun, Hoover proposed a dramatic expansion in federal public works, and called for the states to do likewise. He invited private business to join in. President Trump seems to have similar ideas in terms of a public works program going forward.

“Public officials across the country vowed municifent budgets for 1930 —$35 million for public works in the city of St. Paul; half a billion in the state of Texas. Private industry was even more open-handed: electric utilities committed to spend $1.4 billion on new construction and another half-billion on maintenance; U.S. Steel announced a three-year expansion budgeted at $250 million.”—Herbert Hoover and the White House, Charles Rappleye

Their were other interesting parallels between what’s going on today in the world of Washington and Donald Trump and Hoover’s era (pre-depression):

“Relations with the White House press corps had been deteriorating from the first days of the presidency, when Hoover had sent out his rules for quotation and attribution. Since then the twice-weekly press meetings have become sullen, desultory affairs, with the president making a few terse remarks and correspondents accepting brief, typed handouts in lieu of live interviews. The crowd of reporters, which initially numbered more than a hundred, dwindled to as few as a dozen.”—Herbert Hoover and the White House, Charles Rappleye

Against his better judgement, on June 17, 1929, President Hoover signed into law the Smoot-Hawley tariff bill, which fixed tariffs on 887 specific products and led to an international trade war. The rest is history, and Hoover has been vilified ever since.

President Trump seems to be heading down the same path—for well over a year, he’s openly talked about a program of tariffs, and now, with some in place and more threatened, they’re already having a negative effect on the US economy.

I’m fascinated by the march of cycles throughout history. It’s uncanny how the traits at 172 and 516 year cycles tops stamp themselves on the characters who seek the highest office. Society also takes on the subtle imprints of an era long past. If you’re sensitive to the work of Dr. Raymond Wheeler, for example, Alexander Chizhevski, Nicolai Kondratiev, or Edward Dewey, it becomes obvious how the past becomes full circles as the cycles echo the future. You can get a good sense of how to navigate the upcoming social and political changes by simply studying the past.

While the parallels to Herbert Hoover are really extraordinary, the real story is the deflationary cycle, which rears its ugly head with each and every depression we’ve experienced throughout history.

“Everything plays a part in the unfolding drama of a downturn. Under normal circumstances an economy will weather problems, but when it is weighed down by heavy debts to purchase land, or to speculate in its value, any shock, and more particularly a shock to the related credit-creation process, will expose the weak foundations. One of the secrets, In the final stages of a cycle, is to watch for a contraction in credit. A downturn is yet to happen without one.“—The Secret Life of Real Estate and Banking, Phillip J. Anderson