Struggle to the Top 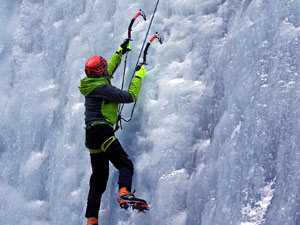 Up to the top under some duress.

It took quite a long time to get turned around in futures with an outlook now to the upside. Friday finally gave me the wave structure to call a B wave bottom in place.

This week saw ES and the SP500 with bottoms at different times and, while we waited and wondered, different wave patterns in both, which made things uncertain, to say the least. With second waves in place as of Friday, we seem to now be on the way to completing this seven month corrective wave up in the NYSE and related US sub-indices.

It’s been a difficult wave structure to navigate (being corrective) and having the Nasdaq side tracing out a motive pattern. It’s made for some strange wave structures along the way.

The good news is that we’re in the final leg across the board and most assets I cover are in ending patterns (diagonals and triangles). As far as the diagonals go, (and mostly likely the triangles, as well), we will have pre-defined maximum levels for the highs. The question regarding topping specifics will be mostly related to timing. 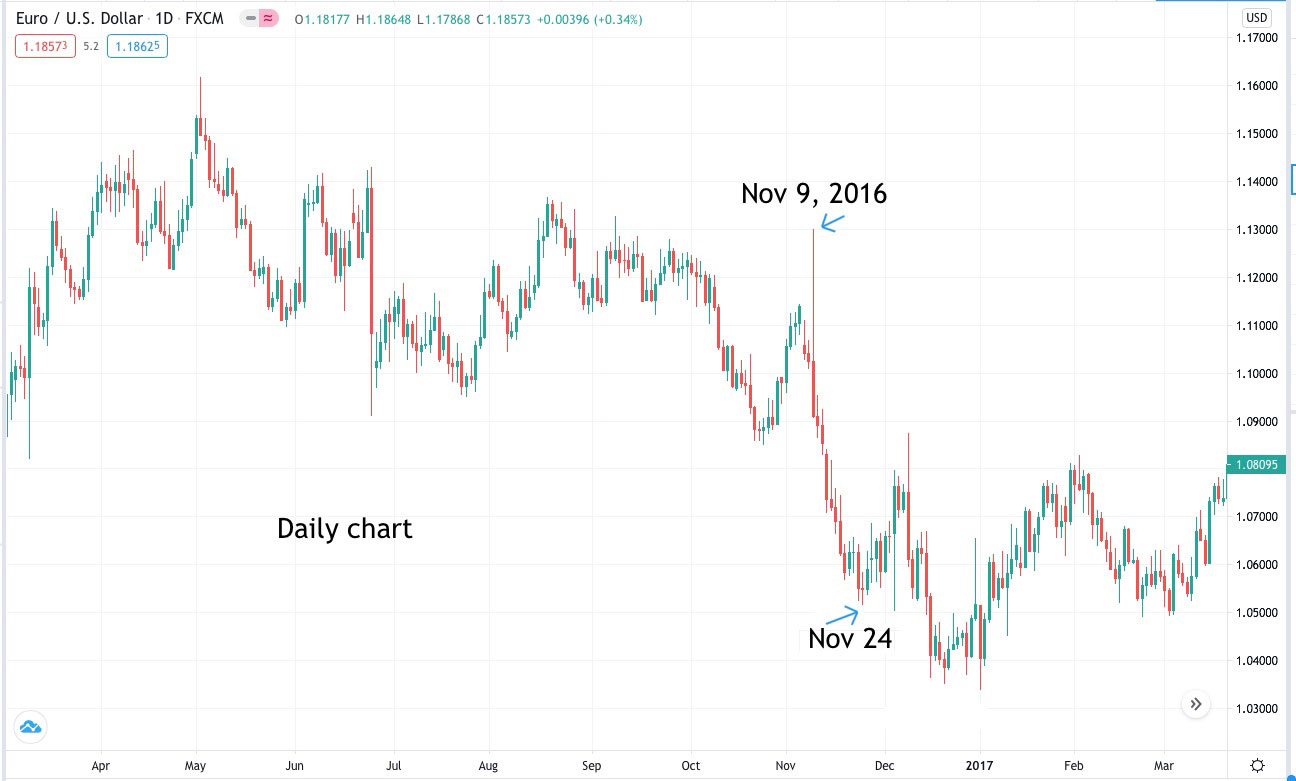 Above is the daily chart of EURUSD showing the 2016 election period. The election that year fell on November 8 and we knew the results late that night (or in the early hours of the next day). The chart above shows the immediate reaction.

While the EURUSD imploded, the US dollar rose. I expect the same result this time because markets are set up for a turn. The results could temper the volatility of the move, but there will be a major trend change, one way or the other.

If Trump wins, I would expect a more dramatic reversal, and particularly because we have lots of ending diagonals in place in the US indices (which by their definition, result in dramatic turns) from pre-defined maximum levels.

The question is going to be one of timing, I think. I don’t know whether the turn will coincide with the determination of the final result, or the fact that the election is over (buy the rumour, sell the news). The result, of course, could be contested and this may push back the final announcement. The other issue is the problem of counting the mail-in ballots, which could take days, or longer. How important these will be may be weighted by the apparent magnitude of the vote in either direction.

It’s going to be an interesting period, from the day of the election, through to the final tally and announcement, along with the reaction in the streets. I expect some level of violence but have no idea how widespread it will be. Eventually, the behind the scenes “wars” will erupt into a civil war in the US (and in other countries across the globe.)

There is more and more information coming out daily about the Biden scandal, but it’s unclear at the moment how much of it is “getting through” to the public.

There are other influences out there, of course, one of them being the congressional hearings involving the three tech giants on October 28, with the bubbling anti-trust suits in various stages of deliverability. Some suits, of course, have already been filed. I expect to see a flood of them before this is all over. 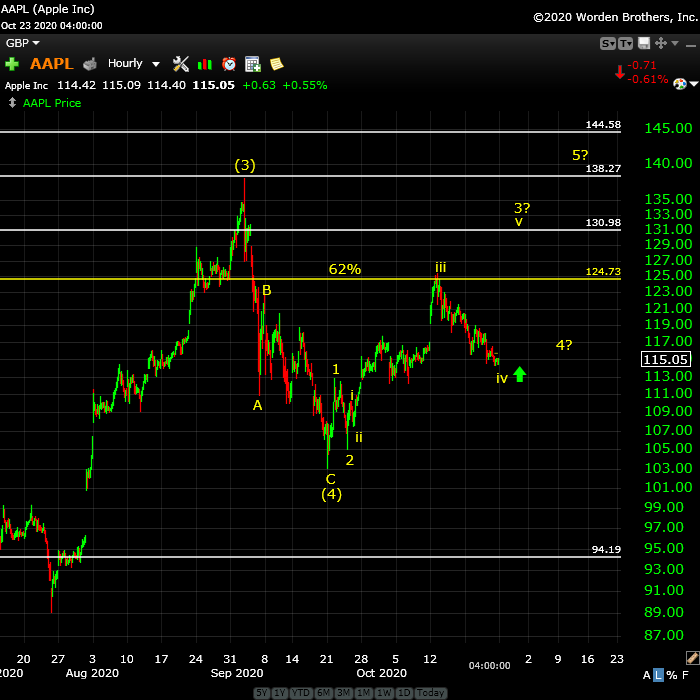 Above is hourly chart of AAPL showing us the setup at the end of the day on Friday.

Last weekend, I was looking for more weakness to give us a larger fourth wave of the third, and it looks like we’re there … at a bottom. It’s a good time to go long.

There should be another fourth wave but I don’t expect it to be very deep. Usually in a fifth wave at the top of a long, bullish rally, the wave that’s the deep one tends to be the fourth wave of the third.

Then you get a wave up to finish the third wave, then a smaller fourth wave, and finally, a fifth wave up to the top.

I’m not sure of the measurements a the moment. but the horizontal lines marking possible inflection points shouldn’t be far off.. 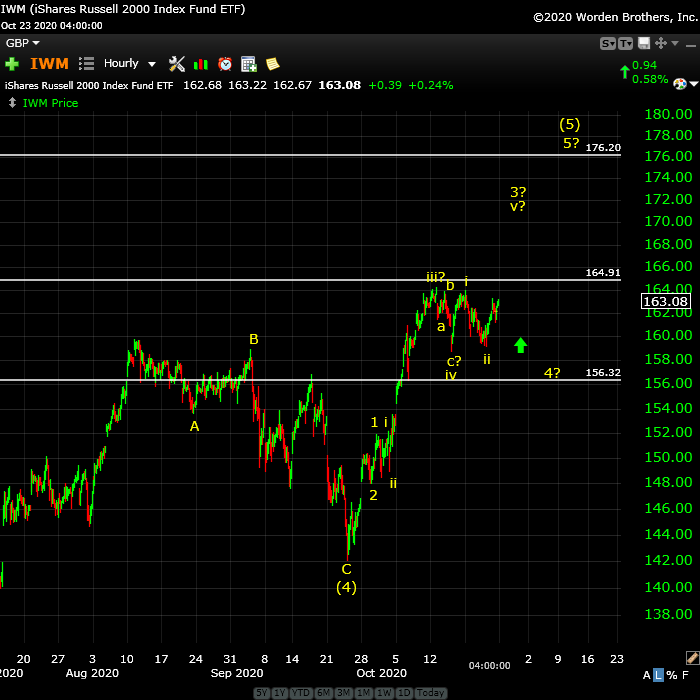 Above is the 1 hour chart of IWM (the Russell 2000) showing us the fifth wave up before a large trend change to the downside.

Note that this extraordinary bullish fifth wave up is missing a valid second wave, similar to what we saw in SPX. However, it’s not in a similar ending diagonal. It looks like we’ll complete a motive set of five wave up to a final high.

Currently, we seem to be starting the fifth wave of the third wave. Wave iv wasn’t very deep; I expected a more bearish retrace. Note that wave 4 at 156.32 may be out of place, in terms of the price. If we see a third wave complete up around 172, then the fourth wave may just come down to around 162.

I’m not 100%  sure of the measurements here at the present time. Once we get the balance of the third wave in place, we should get more clarity. It’s up from here (other than the expected fourth wave).

I believe the final target is going to be up in the 176 area. 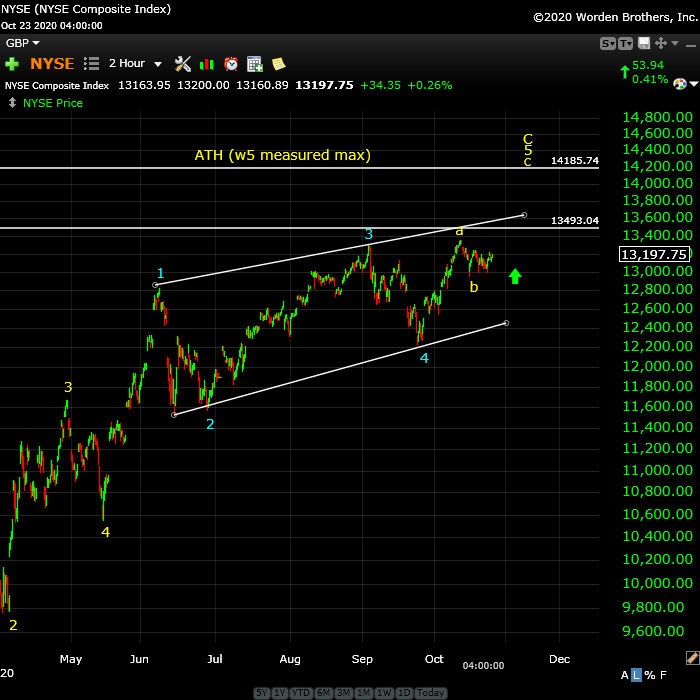 Above is 2 hour chart of NYSE showing us a very large ending diagonal.

The entire wave up from March is corrective, telling us it much completely retrace to the bottom. 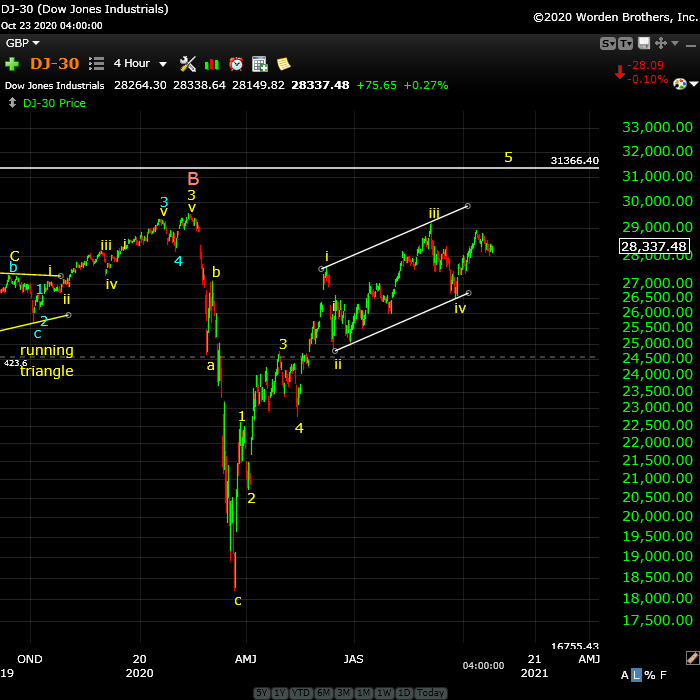 Above is 4 hour chart of the DOW showing us the partially formed ending diagonal.

The is a more textbook version of an ending diagonal, particularly in terms of the third wave, which I like to see as a clear ABC wave. My comments in general here match that of the NYSE and SP500.

ES, the SP500, and DAX are all tracing out ending expanding diagonals. You can see regular ending diagonal patterns in the DOW and NYSE.

We're currently in the C wave up of the 5th wave of the ending expanding diagonal. I'm projecting a max target around the 3800 level. It will result in a dramatic turn and a trend change which will take up below the March low.

Almost all the currency pairs I cover are in possible broadening top (except USDJPY), as is oil, and DXY.  So, we have ending patterns almost right across the board. Now, it's only a matter of time. The US market needs one more high.

Summary: It's an exhausted market getting close to a top, which I now think will coincide with the US election.

The bigger picture is that the SP500 appears to be in an ending expanding diagonal.  Other US market indices have similar patterns. Diagonals are ending patterns and warn of an impending, dramatic trend change after they're complete. This puts us in the final stages of this rally up from March of this year.