The Beat Goes On …

Update Thursday, Nov 19 After the Bell 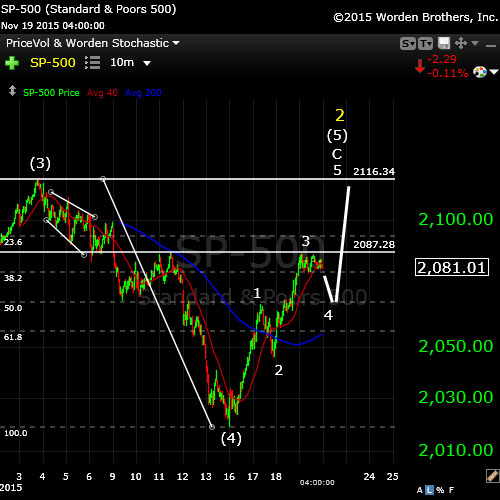 We have kind of an interesting situation here. This is a chart of the SP500 (10 min) at the end fo the day. It shows the path to the top. I have labelled it based upon the most obvious wave count (there’s another way to label this).

There are two hard rules of Elliott Wave:

We could also label the tiny wave at the bottom wave 1 and 2 and the entire larger wave up as all of wave three. In that case it, the wave length wouldn’t be an issue.

It’s a rather odd configuration for an ending wave, so we’ll see what happens. I don’t see a valid EW count for a top where we are now, particularly when you take into account the other indices.

If wave 2 is as marked, there’s also the rule of alternation. Since wave 2 is deep, wave 4 should be shallow and more horizontal than vertical.

Update, Thursday before the Bell:

Futures went up slightly overnight which should complete the third wave, I think. I would expect a negative fourth wave day today.

A Note on “All the Same Market”

I’ve written before on Bob Prechter’s long range forecast that due to debt deleveraging and credit contraction, all the markets internationally would fluctuate in tandem. I’ve been watching this develop over the past few years until today, it appears to me to be in effect.

Today, I notice the pick up in gold (GLD is up a buck and a half today as I write this). We are nearing a top in equities. Currencies appear to have reversed over recent days. I’ve been watching USD/CAD for quite a while and it’s completed a first wave (of 5 waves). I’ve been expecting a turn for the past month or so. It was due for a reversal and should now retrace 62% of the length of that first wave. That should take it back up to about 1.100. Other USD currency pairs should also retrace to varying degrees.

All this comes about as the US equities seem to be completing a corrective ABC wave (wave 2), getting ready to turn down in wave 3.

I think it’s important to keep the bigger picture in mind. This is the largest financial bubble in history. It will have tremendous repercussions as it all unravels.

We’re back to “Waiting for GoDown.”

The market is not making my job easy. It’s giving few clues.

After reading the wave down as a possible first wave (leading diagonal), that idea was discarded after our rally this morning passed the fourth wave level without a turnover. In fact, we sky-rocketed up past the 62% retrace level in virtually all the indices (not the NYSE, however—it’s lagging).

The leading diagonal idea, as well as the first wave down option are off the table.

Bottom line:  Wave 4 down is being retraced. I expect we will reach or exceed the previous high at approximately 2116 in the SPX.

Timing: The key turn date on my schedule is November 23. However, we have US Thanksgiving coming up on November 25, so I don’t quite know how that works into the bigger picture. I do know that when the wave structure ends at five waves, so does this countertrend move. 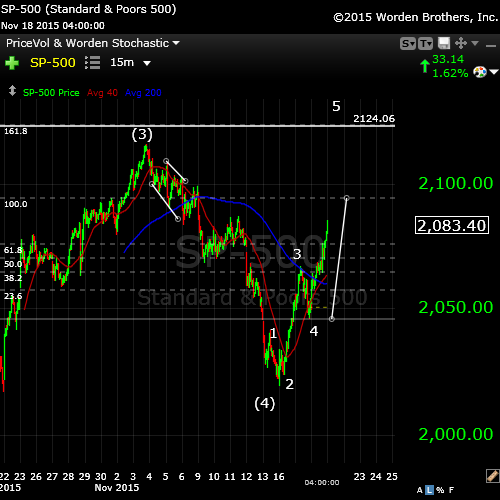 Above is a 15 minute chart of the SP500 showing the wave structure. While I’ve labelled the rally wave with a 3 and 4, it’s likely the entire wave from 2 up is wave 3, which is not quite complete. This would be the same structure as the entire C wave (on a smaller scale). I would expect wave 3 to finish and be followed by wave 4 with a relatively deep retrace. Finally, we’ll end with wave 5.

You’ll get a clearer picture of the wave structure from the futures charts below.

Last week, I mentioned that wave four on all the indices had dropped exactly 1.618 time the length of wave 1 of C (from Sept 29). Since the fifth wave is typically the same length, this suggests a double top on each of the indices. 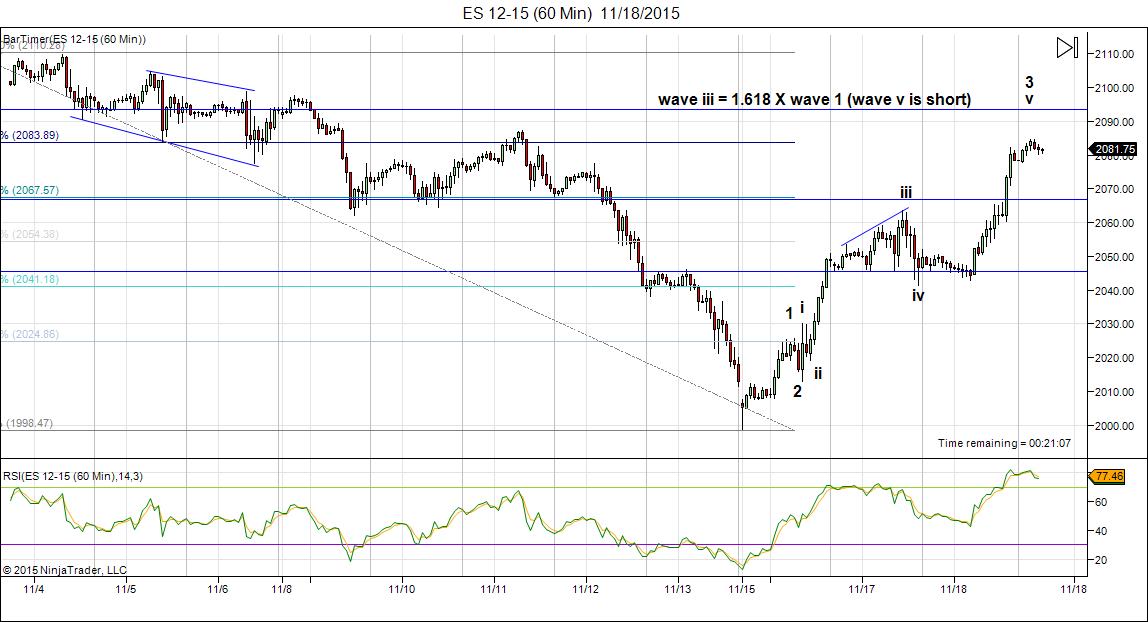 Above is tonight’s 60 minute chart of the ES (emini SPX futures). Click to enlarge.

This gives a clearer look at the structure of the rally wave. On the screen, I’ve labelled the subwaves. Wave iii is exactly 1.618 X wave 1, as is wave v (except that, at the moment, wave v is slightly short of that mark—shown by the horizontal line and the 3, v labels).

Next, I would expect a wave 4 retrace (possibly to the previous 4th (wave iv) before a final wave 5 up. In ES the fourth wave would typically retrace 38%, in that case dropping to about 2052. 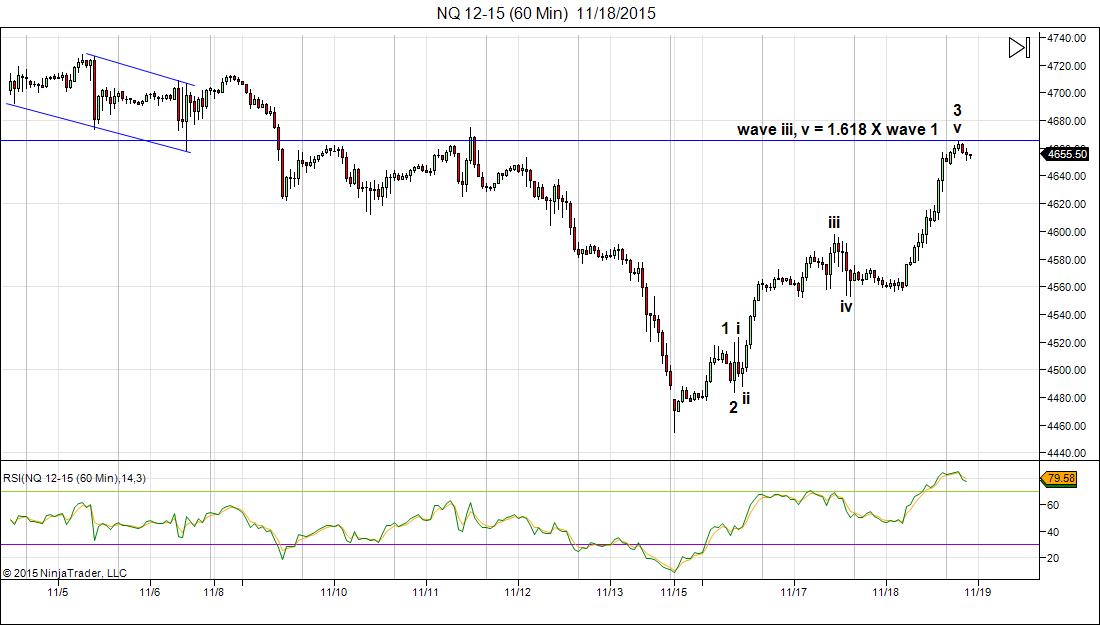 Above is the 60 minute chart of the NQ (Nasdaq futures). Wave iii an v are exactly 1.618 X the length of wave 1. This chart mirrors the ES chart above. The wave structure is very clear. 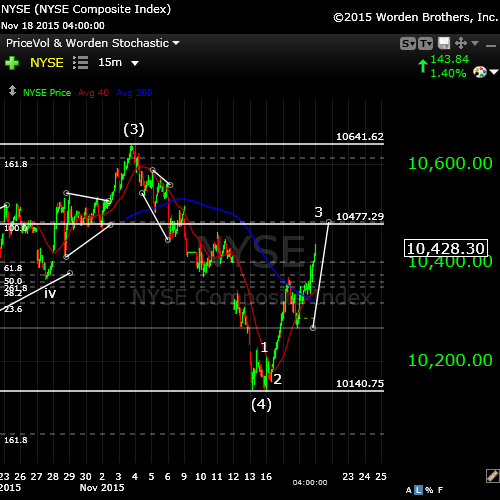 I’ve labelled the more likely wave count. You can see that wave v of 3 is not finished yet. Following should be wave 4 and then 5.

Let’s remember where we are in the bigger picture 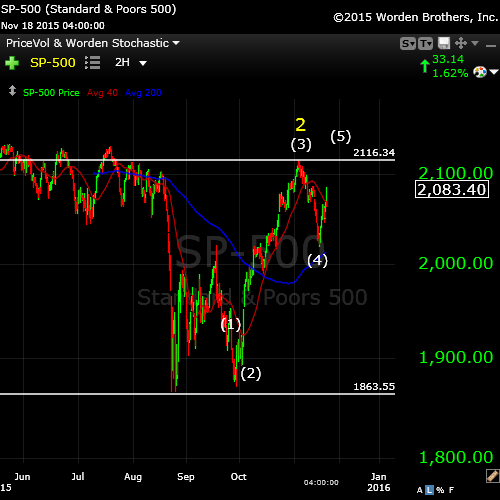 Above is the 2 hour chart of the SP500 showing the ABC corrective wave we’re in. Once five waves up are complete, we should turn down into the third wave. 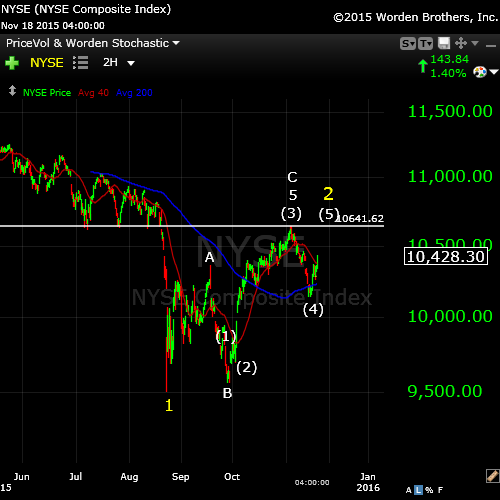 Finally, here’s the 2 hour chart of the NYSE. The NYSE is lagging the other major indices. The horizontal line is the 62% level from the top of the market.