Update Thursday morning: The futures dropped further overnight, so what we have now is almost a full set of five waves down, which will likely complete this morning. Then we should retrace about 62% rather than to the top of the wave. Not a huge change but the good news is the downtrend is confirmed now as it looks like we’re into the third wave. So we’ll open lower rather than higher. Just mind the retrace and then it should be all downhill from there.

Bottom Line: The third wave down is just about to get started. It has a lot of downside to go.

Yesterday, the SP500 just missed my projected target of 2104 (it hit 2103.46) but keeled over anyway. Overnight and into this morning, the main US indices may have come down in five waves, although it still looks like a 3 to me. With the announcement of the Fed minutes today, the market rallied back up in 3 waves, filling the appropriate gaps and then came right back down again. But it came down in 3 waves, so the likelihood (which I’m starting to see in the futures tonight) is that we head back up to test the spike at the top of the second wave we just created today at 2096.17 in the SP. We could also head just high enough to test 2114 as I’m not 100% certain that today’s wave down was a complete 5 waves.

The bottom line is we’re heading lower over the next couple of days.

Today was a very telling day—there were three stocks down for every one up. It was a broad-based decline, even though the Fed minutes gave the market a little bit of buoyancy. The advance decline was negative all day.

The market has been like a yo-yo  lately, but as the bulls fail time and again to make any progress, the selling pressure starts to show up. Today was a good indication of what’s to come. 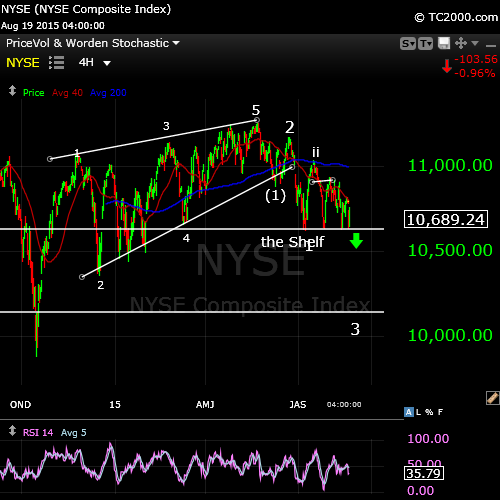 Let’s look at the big picture first. The NYSE above (the biggest exchange in the world) is progressing nicely downhill. We need to drop through the shelf, which I’ve identified in previous posts before the pace really picks up. So far, we seem to have been in a series of bounces within the third wave as we work through the resistance. 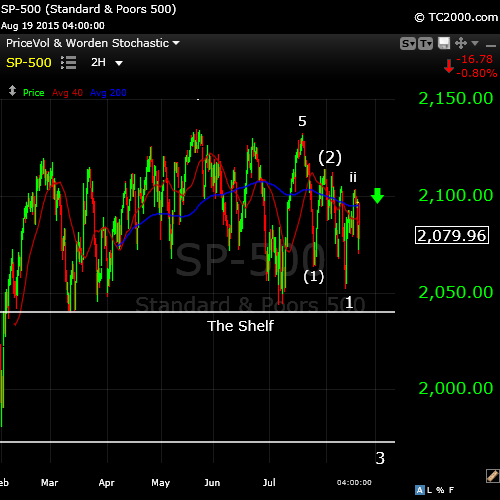 The bigger picture on the SP500 (above) is much the same. I’ve changed the labelling slightly to reflect the fact that it appears we did a slightly truncated double top at the very top of the market (the wave marked ‘5’ on my chart missed the previous high by less than $2.00—$1.88 to be exact). It certainly makes the count a little cleaner, but the market overall is a bit messy. We’ll jump in for a closer look at the more recent action. 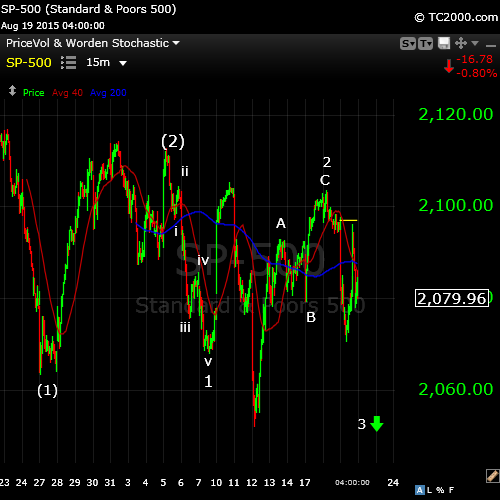 Zooming in on recent market action in the SP500 (above), you can see wave 1 came down in 5 waves. Today’s wave also looks like a motive 5 down and then we went back up today in 3, then down in three. So today’s wave will likely retrace to test the top of the wave and then turn down. The challenge in these counts is that the double tops are missing an exact double top by a dollar or so, but that indicates a very fractured and weak market. If we somehow head up above the previous high at 2104, we would have to turn down at 2114, or this count is incorrect. However, I’m confident at this point that we’ll head lower and when we traverse “the shelf,” we should drop dramatically lower. 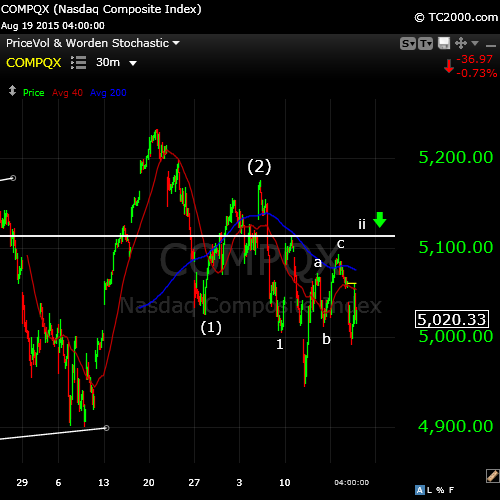 The Nasdaq is similar to the other indices now. After reaching the top in 5 waves, it came down in five waves to complete the first wave down. We’ve also completed a 3 wave second wave and now we’re working on the third wave. After today’s move down, I’m still expecting the Nasdaq to make the wave ii target at 5112.47. It may not, but it’s the most obvious target and would create slightly more complex wave, but still obviously a countertrend wave. The trend is down. 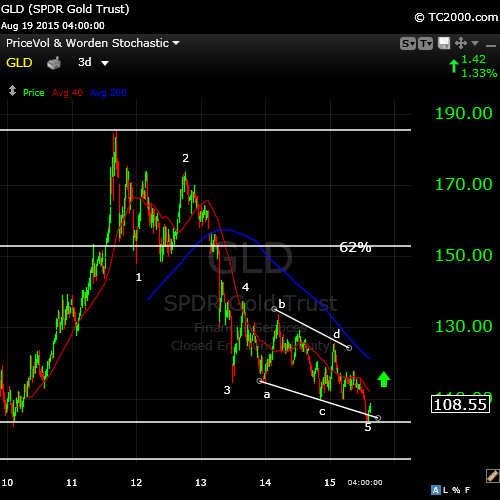 Some time ago, I flagged GLD (gold ETF) as having completed an ending diagonal. Ending diagonals are ending patterns of a wave sequence, appearing in the fourth wave position. They typically involve a “throw-over” which sends them slightly below the lower trendline, which was the case here. Then they head up dramatically in the opposite direction. This has been textbook so far. I expect it to reach the 62% retracement line. It’s a countertrend move, so once it gets there, it will reverse downward into a C wave, which will eventually reach new lows. 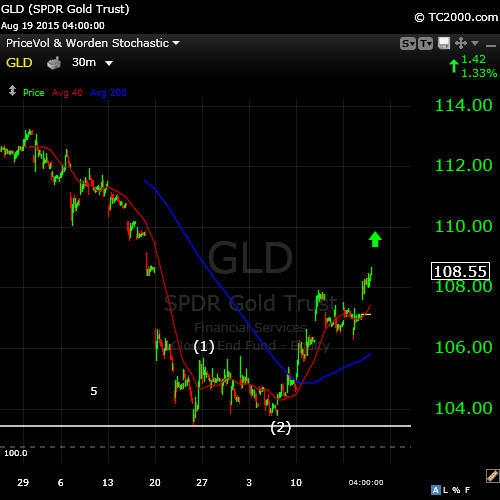 Zooming in to GLD, you can see the bottom of  the ending diagonal. Wave (1) went up in a clear 5 waves, wave (2) came down in 3 waves and now we’re well into wave (3). Wave 3, as a indicated in the previous chart has a long way to go. It also adds to the expectation of a downtrend in the US market, as when the market moves down, there’s often a flight to gold.

Finally, here’s a cycles analysis of the SPY (SP500), showing the longer length cycles are clearly heading down short term into the beginning of September with a bounce coming at the time. I would suspect we’ll see a full set of 5 waves down be the beginning of September. This uses TechSignal 10 from the Foundation for the Study of Cycles, ground-breaking software that analyses cycles within any market asset within seconds. The above analysis uses 13 year of data. I have selected the cycles with the highest profitability to plot a combined projection.

Have a great evening!