The larger, previous fourth wave is at about 2017 SP500 so I suspect that’s where we’re headed. Or close by.

What might be playing out is a leading diagonal, which would mean we’d next want to see a second wave which would retrace at least 62%. https://worldcyclesinstitute.com/leading-diagonal-2/

Not sure yet where we’re going, but this option is back on the table after today’s action. If this is, in fact, the pattern that’s unfolding, it would mean we already topped on November 3.

“Waiting for Godot” is a well-known absurdist play by Samuel Beckett. It’s the story of two characters who wait aimlessly in vain for the arrival of someone named Godot. Hopefully, we’re not waiting in vain, nor aimlessly, of course!

But this has been a long, frustrating wait, nonetheless.

Bottom line: My prognosis hasn’t changed. We are in the last small leg of a C wave in a large countertrend move that will turn to the downside within the next few days.

Cycles and Astro: November has lots of turn dates for equities, the dollar, and other currencies for Nov 10/11 and we have a new moon on Nov 11 plus we’re at the tail end of the minor lunar standstill, which happens every 9.3 years (the last one in 2006).

We also have a bunch of unexpected solar flares and sunspots erupting this week. 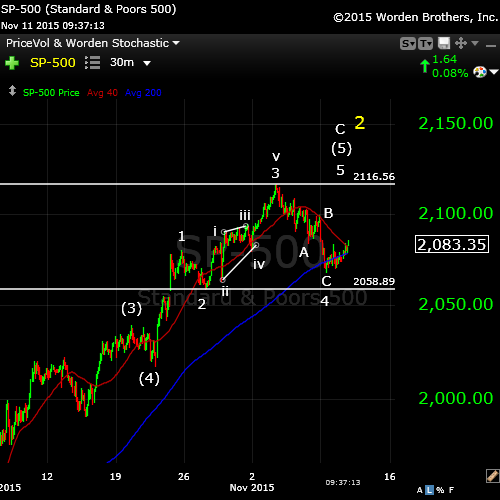 A look at the SP500 from yesterday shows that we’re in a final fifth wave. What is disconcerting about this wave is that is has an odd structure and did not come down as far as we would expect it to. So, the market is doing the usual frustrating thing it usually likes to do! Let’s zoom in … 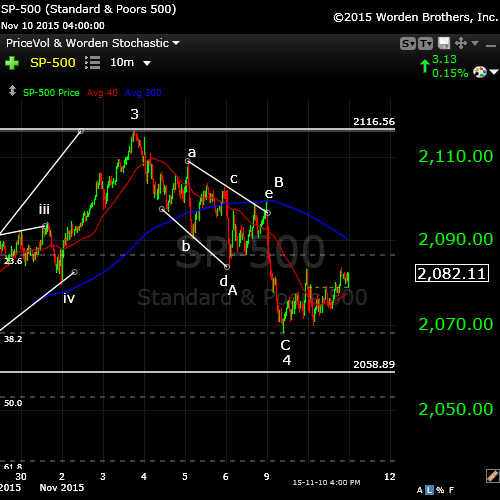 Here’s a 10 minute chart of the SP500 showing the wave down, what I’ve now come to the conclusion is wave 4 and should retrace to the previous top at 2116 or so. I’ve drawn in what appears to be a triangle, but it also ends up in an ABC configuration.

Many of you know I’ve been flirting with the leading diagonal idea which came from the configuration of the futures market. It is not an option in the cash indices and so I’ve discarded the idea. The horizontal line at 2058 shows the level of what could be counted as the previous 4th wave of 1 degree smaller, so we haven’t come down very far at all. Fourth waves typically retrace to the previous 4th wave or 38%. So, this is a minor 4th wave or finishing wave.

Overnight in futures, there were points where it appeared it could roll over, but by this morning, it appears to be well on its way to a top.

Currencies and the Dollar

Years ago, Robert Prechter talked about “all the same market” in that when deleveraging of debt became the key factor in the markets internationally, they would all start to move together. I have been watching the Dollar chart (middle) start to line up with the US indices and get more and more aligned over the past few months.

It’s no secret, if you’re an Elliott wave counter like I am, that the euro and other dollar pairs are about the turn. Their waves and virtually complete. The big picture is that I’m seeing the imminent turn of all the dollar pairs. In fact, we appear to be in the last wave down today.