All One Market: The Rebound

Bottom line: My prognosis hasn’t changed, but the recent wave down has become clear, and is at an end (or extremely close to one). The wave down since Nov. 4 is wave 4 of the C wave. We now have to rise back up to test the previous high at SP 2116.48. The drop took approximately 7 market days. The rise should take about that long, which brings us to about the Nov. 23 cycle turn projection. The fifth wave should rise in 5 waves.

Cycles and Astro: November has lots of turn dates for equities, the dollar, and other currencies. The key dates for the month of November for equities and currencies are Nov. 4, 16, and 23. These come from the Market Timing Report, among other sources. I suspect Nov 16 (Monday) will be the wave 4 low, while Nov. 23 may be the top of wave 5 (top of wave C, wave 2). Looking head, the important December 14 date could be the low of wave 3 down, which would lead to a end of year rally before the final low in January, 2016. 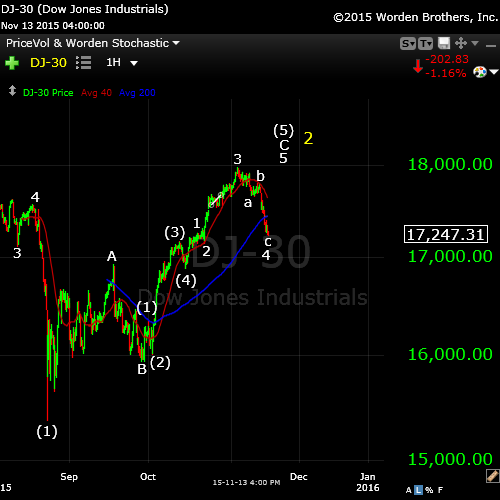 A look at the DOW shows that we’re at (or almost at) the bottom of wave 4. What has been disconcerting about this wave is its odd structure. The first half came down in overlapping waves and the second half in a “motive fashion.”  However, it is not a motive wave, and can now be one of two things: either a 4th wave (the preference), or a leading diagonal (much less likely).

The fourth wave will see us heading back up to the high at 2116.48 before turning down in a very large third wave. The leading diagonal would retrace only 62% (I put this as a low probability event, although I’ll be on the lookout for it and will alert you on this blog). 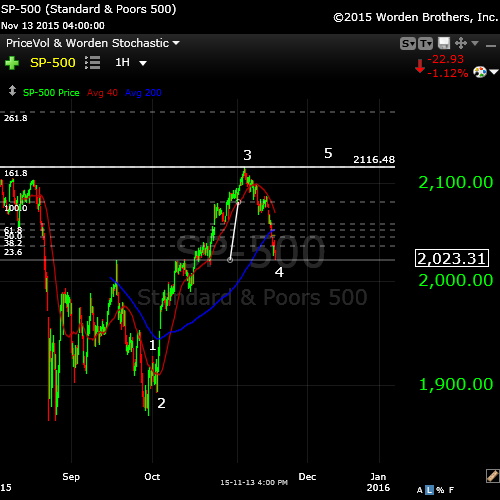 Here’s a one hour chart of the SP500 showing the 4th wave down. The larger pattern from August 24 is a regular flat (an ABC wave configuration, 3-3-5). This means the first two waves will be in waves of 3 and the final C wave will be a wave in 5 waves. Above is the C wave.

The giveaway to the next move for me is the fact that wave 4 has done a very deep retracement. In fact, it has now retraced down to the point that it is EXACTLY 1.618 X the length of the first wave from the top. The fifth wave is usually 1.618 times the length of the first wave. I’ve place the fibonacci retracement tool on the chart and you can see on the left that 161.8 aligns with the top horizontal line, marking the top of the third wave.

The market is telling me we’re going to complete a 5th wave to test the previous top at 2116.48 SPX.

If you were to go and measure all the other major indices, you’ll find they have come down exactly the same percentage in relationship to their perspective first waves. 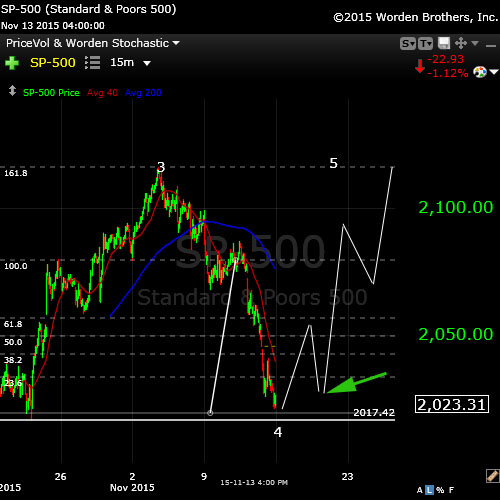 You can see we’re looking at the 4th wave, which has almost come down to touch the previous 4th wave (horizontal line). We may see a little more downside on Sunday in the futures. However, I would expect us to start the 5th wave up on Monday.

The fifth wave up should rise in 5 waves to the previous high (exactly 1.618 X the length of the larger first wave of the larger C wave (shown in a previous chart above).

The best place to enter is at the bottom of the second wave (the green arrow on the chart), which usually retraces 62% of the first wave up. In this case, the retrace may drop lower than 62% because we’re talking about a market that is overly bearish and in arguably the last wave of the larger C wave, ready for a very large drop. So use caution.

After the retrace to the top, the market should turn down. 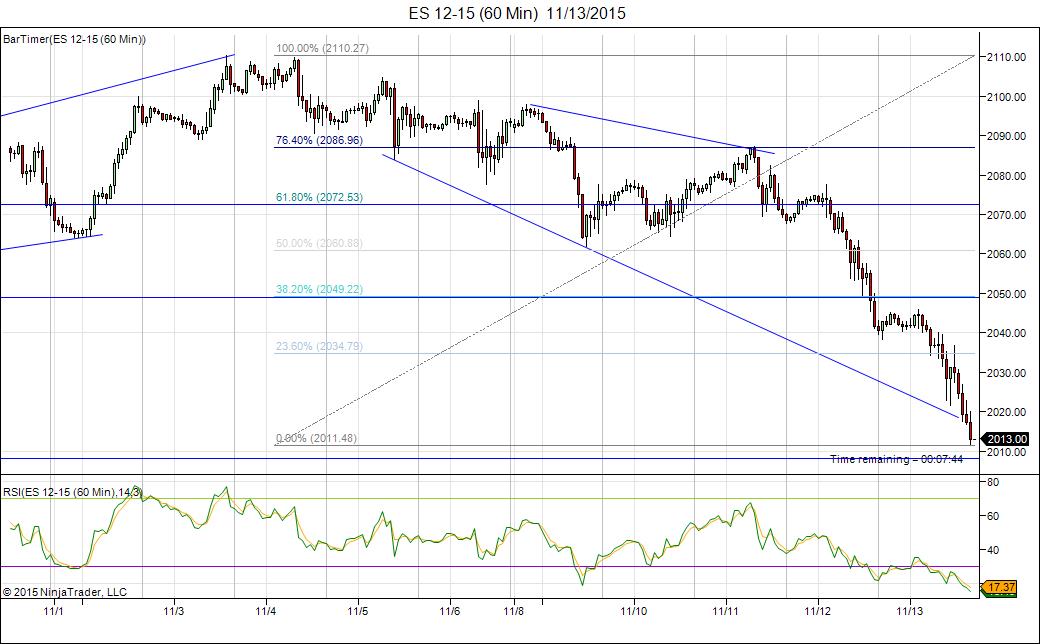 Here is a one hour chart of ES (SPX futures) as at the close on Friday, Nov. 13.