Here’s tonight’s late addition to this previous post. I would guess we’re coming down tomorrow. Below is the NYSE. We’ve been waiting for it to make the 62% retrace all the darn day. It actually has about $3.00 still to go as at this writing, so we’ll like do a very small opening gap reversal Wednesday morning. NOTE: It’s also a new moon. 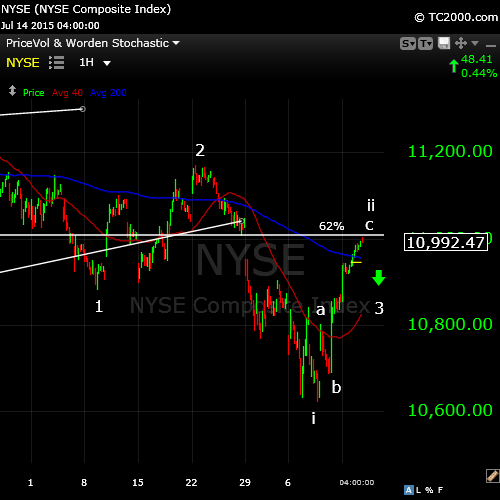 It’s all playing out as forecast. You can go back to my previous post from last weekend to see that there isn’t much difference between then and now. What we simply did is complete the second wave down (it was debatable whether we had or not last week). But, as I stated then, we need to do a second wave (a 62% retrace), and lo and behold, we’re finally on our way.

Now, a word about Greece. Everyone’s so focussed on whether it’s going to default, or not. To the market, it really doesn’t matter. Once the mood of the herd changes, the market changes trend and since we’re been in a countertrend for almost seven years, we’re now reverting back to a motive trend (5 waves in a fractal configuration, with 3 wave retraces). What’s great about an Elliott wave trend is that it unfolds in measurable moves. There isn’t a ton of guesswork involved once it gets on its way.

Events don’t determine the market; it’s the other way around. The mood determines events, while the market keeps moving in a measured manner into more and more negative territory. After all, Greece is already bankrupt. So is Italy, France, Spain, and on and on. They’re going to go down like dominoes and then we’ll see the spread to the west. 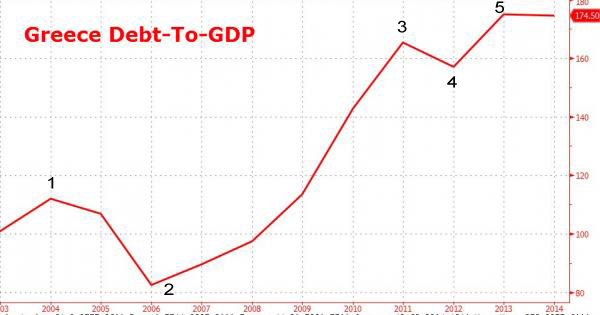 Since we’re talking about Elliott wave, here’s a great example of how the same trend configuration applies to the real world (above). Five waves up, which means it has to reverse. Cycles and waves exist in everything.

So, get strapped in … this is the big one … the bottom is years away, but expect a really big drop over the next year. At the bottom of this page, I’ve provided a path for the next month or so. As I’ve said previously, the bottom should be sometime around the first part of August. Then, we’ll start a larger second wave up for at least a month (retracing 62% from the very top) … and start down all over again in a larger version of the path you see below. 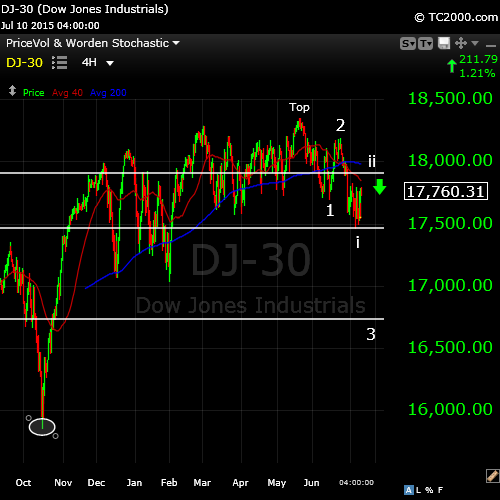 Above is the four hour chart of the DOW. I show us in the third wave down, but about to retrace 62% to complete the second wave of the third (waves are fractal) and then we should head down in the third of the third rather swiftly. I think everyone expects that one to bottom around the 15th of the month. Then we’ll have a 4th wave bounce (see the path at the bottom of this page). That up and down action will likely last more than a week. 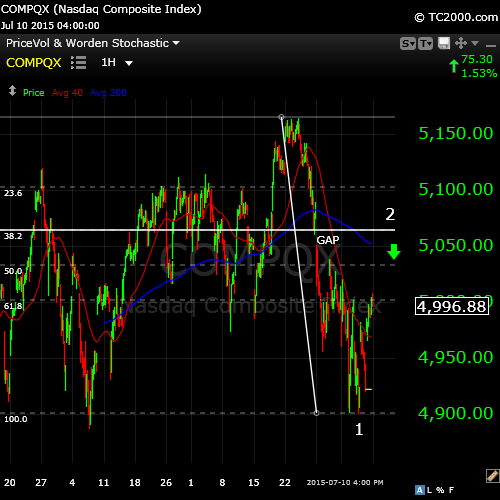 Above is the Nasdaq one hour chart. The Nasdaq has only done one wave down, so this is where it will get back in sync with the other indices. Gaps usually get filled, so you can see that the 62% retrace level is right above the gap. Funny how that works … 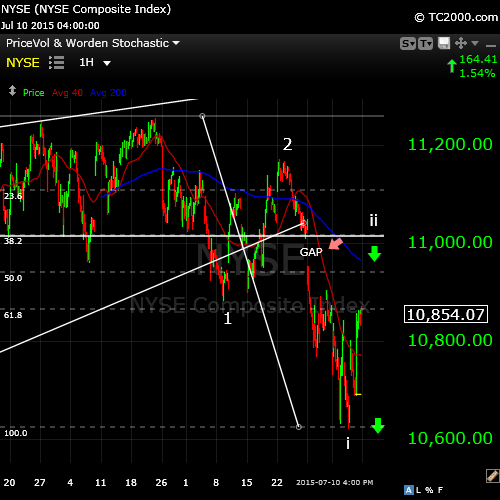 Above is the one hour NYSE. It’s got a slightly different configuration. The drop so far  measured out that we’ve just done a first wave down to about $10,600, although my labelling doesn’t reflect that. However, I’ve measured the 62% retrace from the top and you’ll see it’s right at the top of the gap, which will likely get filled before we head down. There are some other reasons for my suggestion that this is only a first wave, but they’re more technical. The bottom line is that it makes no difference as to where we’re going. 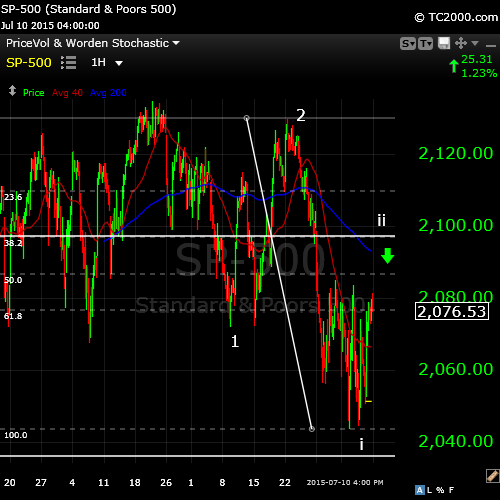 Above it the SP500.  Same basic configuration. 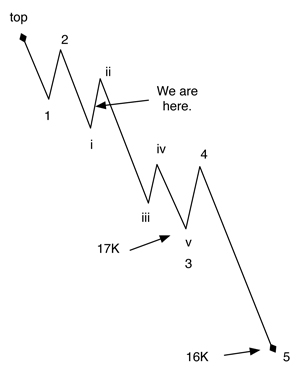 Here’s the Elliott wave path for the next month or so. I’ve labelled where we are, so that you can see how it should play out. The fourth wave is where you’ll see the long consolidation. The higher degree fourth (4) always reverts back to the lower degree fourth (iv), a 38% retrace.

The lengths of my lines don’t reflect the actual lengths of the market waves – they’re approximate only.

The fifth wave will likely be as long as all the previous waves combined to that point and will seem like a capitulation. It will get noticed!

I’ve labelled what might be the price levels for bounces. This is a guesstimate only. We have to at least get below $16K for the bottom of the fifth wave, as that’s the beginning of the higher degree ending diagonal which topped the market. I show those levels on my previous post.

Hope this helps give you a much clearer idea of how everything should unfold through the first part of August.