“The market will do the obvious thing in the most un-obvious way.” I learned that little “truism” a few years back and it certainly hasn’t disappointed. The last couple of days in a low volume market has been a bit of a challenge in terms of figuring out the next move. But sooner or later, the market sends a signal. It’s best not to be in it until you get that signal.

In today’s post, I’ll tell you what I think is going to happen next and why. We’ll look at all the major US indices. Tomorrow (Friday) the US markets are closed and Sunday is the Greek referendum, which should give the market an excuse for the next move … 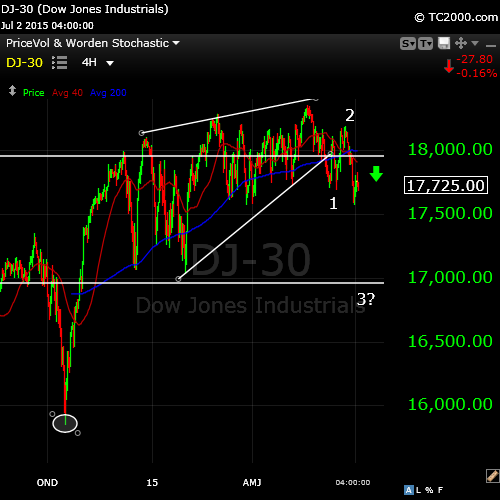 We’ll start with the four hour chart of the DOW (above) to give us a look at the big picture. Most of the indices finished an ending diagonal (or wedge) on May 20 or so. After completing an ending diagonal, the market will typically retrace to the beginning of the pattern relatively quickly. I’ve circled the beginning of the pattern here, just below $16,000 (cycles analysis suggests somewhere around the end of the first week of August). That’s the ultimate target for this first set of five waves down. How we get there is the question.

So far, we’ve completed a first wave down in the DOW, followed by a second wave and what I’m considering to be the first wave of the third. In the zoomed in charts below, I’ll take you through what I think the path will be. 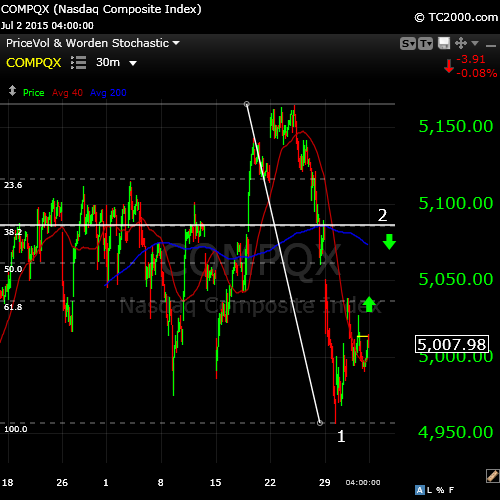 There are a few “tells” and here is the first (above). The Nasdaq has now done a first wave down. I can easily count five waves. That suggests it’s in the midst of retracing 62% (the horizontal line). After that, it will head down in a third wave, which will also put it back in sync with the DOW, NYSE, and SP500, which are all in a third wave at the moment. The move up will likely coincide with the “hopium” flying around Sunday and Monday leading up to an possibly including the Greek vote. 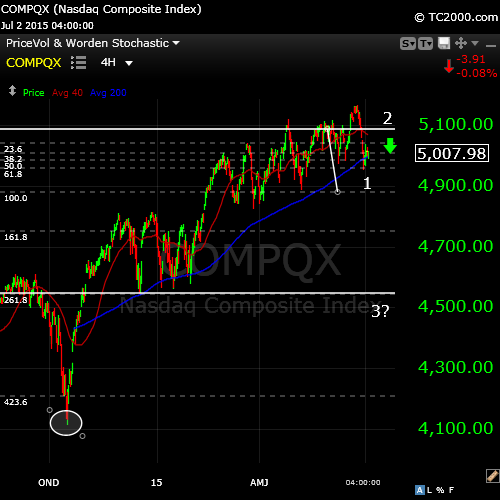 Above is a zoomed out chart (4 hour) of the Nasdaq showing the bigger picture. It has a long way down to get to the beginning of the ending diagonal pattern. I’ve circled the ultimate target around $4100. Wave 3 will get part-way there, then there’ll be a higher degree fourth wave bounce, which should retrace 38% and then down into a fifth wave to the target. 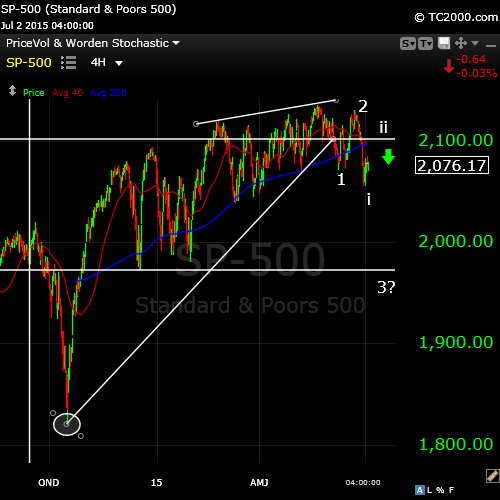 The SP500 above is in the same situation as the DOW and NYSE. It’s eventually got to get to the beginning of the ending diagonal pattern, which I’ve circled just above $1800. I’m expecting a small bounce to a second wave and then we head down. 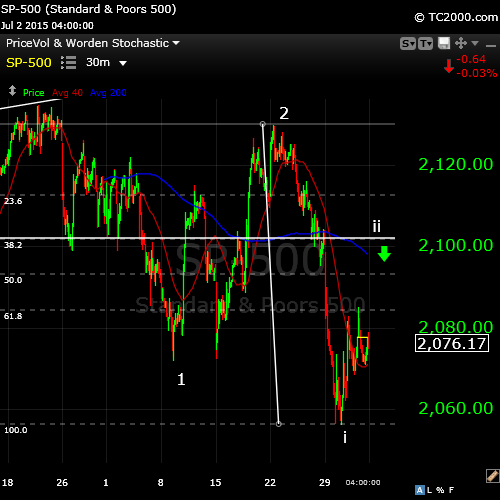 Let’s zoom in to get a closer look at the pattern. In the past couple of days, I was expecting this most recent countertrend move to be a fourth wave, but it’s far bigger than any of the sub waves in wave i down, so it really has to be part of a second wave forming. This is the second “tell”—the size of this current countertrend move. It’s too big for a fourth wave, so we must be retracing higher, which would put it in parallel with the expected move in the Nasdaq.

This suggests the third wave down will subdivide into five distinct waves. So, Sunday/Monday expect a short move up to the 62% mark (horizontal line) and then a turn down into the third of the third, which should come straight down (a nowhere-to-hide wave). 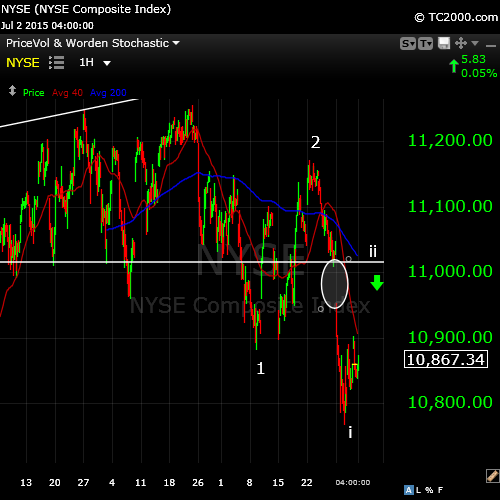 Finally, let’s look at the NYSE, which always seems to have the clearest pattern. There’s a third “tell” here. The market doesn’t like to have open gaps. They’re almost always filled. I’ve circled the gap in the chart. This suggests the current countertrend wave will retrace to the 62% mark (horizontal line) and then turn down into the third of the third. This coincides with the moves I’ve suggested for all the other indices above.

That’s my take on the current situation in the major US indices. They all seem to be saying the same thing in one way or another.