The Dip — A Game-Changer for Me 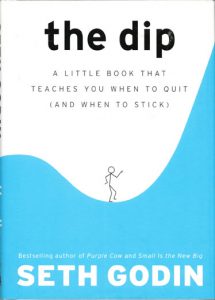 “What really sets superstars apart from everyone else is the ability to escape dead ends quickly while staying focused and motivated when it really counts.” — Seth Godin

“Winners quit fast, quit often, and quit without guilt—until they commit to beating the right Dip for the right reasons. In fact, winners seek out the Dip. They realize that the bigger the barrier, the bigger the reward for getting past it. If you can become number one in your niche, you’ll get more than your fair share of profits, glory, and long-term security.”

I read this little book when I was learning the Elliott Wave Principle, which took me years to master, because of the errors and omissions in the book, and the seeming inability of the folks at Elliott Wave International to analyze waves properly (argh!). It was a frustrating time.

There were many times where I wanted to just give up. That’s “the Dip.” It’s the point in any major undertaking (usually three quarters of the way there) where psychologically, you hit a low point and are on the verge of quitting altogether.

Many never make it to their goal; it separates the “stars” from the also-rans. As they say, we don’t remember who came in second.

The “superstars,” the experts we look up to in life, got there because they powered through that “dip” in motivation and made it to the end, undergoing many frustrating challenges along the way.

We’ve had nine months in the US indices of a slowly rising B wave,  but it is indeed almost over. Just a little more patience will pay off in a big way.

It’s been a frustrating wait because the rally in ES has been one that has almost died several times, but suddenly comes back to life every time. Frustrating!

But the Elliott Wave Principle, either through counting waves, or through fibonacci measurements, always alerts as to when the turn will come. Time, as I’ve said many times before, is not something EW does well. So … we wait. The signals for the coming turn are clear; however, the shorter-term wave structure in the US indices is not as clear as I’d like it to be.

In any case, other asset classes are also signalling a turn is imminent. This is going to be a major turn of just about everything. It will be worth the wait.

In terms of my work learning Elliott Wave, I found that I had to try to disprove it in order to prove it in every instance. It took me several years to go through the process, figuring out when I was wrong, why I was wrong. That process led to additional rules I discovered and guidelines in the book that I ultimately figured out were dead wrong. For example, truncations. I have not been able to find one in back-testing through a hundred years of the DOW data.

I lost a fair amount of money along the way, but I was determined to either prove it worked, or find a flaw that would cause me to abandon it. I was determined to master this particular niche. I’m still working towards that end. I say that because, with the market, there’s always some nuance or subtle pattern that you end up refining in some way. But the work I did has paid off.

I have not been able to find an example of how Elliott Wave fails to adhere to the set of rules that I’ve adapted from the Elliott Wave Principle book. Most analysts aren’t willing to put in this kind of work. I am, thanks to Seth Godin and The Dip.

NDX really didn’t advance this week; it still looks like we may have an ending diagonal in the works to finish off the 3rd wave. The measured target for the third wave to the upside is 7900, but I’m unsure if we’ll actually make it that high. 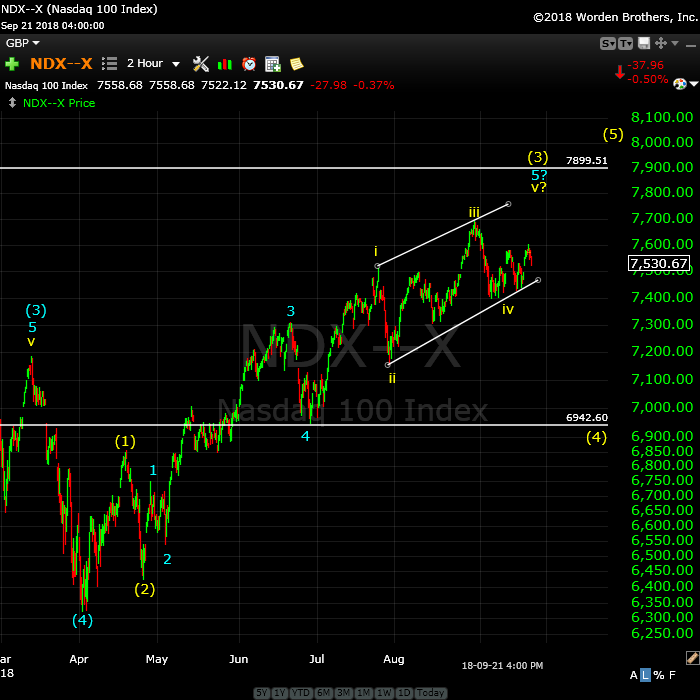 There at least a couple of ways to label this final set of waves up to the top of wave 3. With the sideways movement this past week, and the fact that NDX (and NQ) did not break below the lower trendline, leads me to label this pattern as an ending diagonal. If so, expect a final rally up to the upper trendline. We could get a “throw-over” (a spike above the upper trendline) but it’s not required to end the pattern.

On the other hand, if we break down below the lower trendline, then we’re in the fourth wave down and the third wave would likely be complete (I can also count the wave up as having traced out a full five waves of the third).

Keep in mind that at tops, often the final waves start to compress and often doing trace out their full expected lengths.

The fourth wave down and then a final fifth wave to a new high are the final two waves before the top of the 500 year rally. After the final 5th wave up in NDX is complete, we’ll turn down into the bear market I’ve been talking about here for the past three years!

Even though we're at a new high this weekend, we're still waiting for the fifth of the fifth wave to end. It should end this week; there are signs from all the other asset classes I cover that we're going to have a major turn of just about everything.

The big change this week was the movement of the US dollar, which did not bottom as a wave in three as it threatened to do, but dropped to a new low. That sent SPX higher, in a larger wave than I expected, but still the final wave.

With all the events coming this week (full moon, Fed announcement), I would expect the turn to finally take hold. My money is on the Federal Reserve announcement, which tends to be a magnet and usually results in a turn the following day — the long-awaited C wave.

My preference is for this continuation of fourth wave pattern (down) is that of a expanded flat. However, technically, it could also be a running flat. At the present time, the B wave (that's the ABC wave up from about 2532) is longer than the A wave (marked as the 4th wave down from January 29, 2018). A regular flat registers as an expanded flat when the B wave is over 105% of the length of the A wave—ie, the B wave would need to reach above 2889, which is has done.