One Market: An International Parade

The Parade Grows Larger and Larger 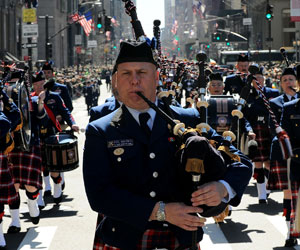 The picture at left depicts a St. Patrick’s Day Parade in New York City. Somewhat appropriate to what I’m seeing in the markets.

All the Same Market: I’ve been mentioning for months now that the entire market is moving as one entity, the “all the same market” scenario, a phrase that Robert Prechter coined many years ago, when he projected the upcoming crash.

We’re starting to deleverage the enormous debt around the world. Central banks long ago lost control (they never really had control, just influence). They have tools, like “TARP,” for example, but treasuries dictate interest rates (the Federal Reserve just follows along). They’ve been attempting to fight deflation now for years, but it’s slowly taking hold.

We have an inflationary bubble which is about to break and you’re going to have a front row seat. 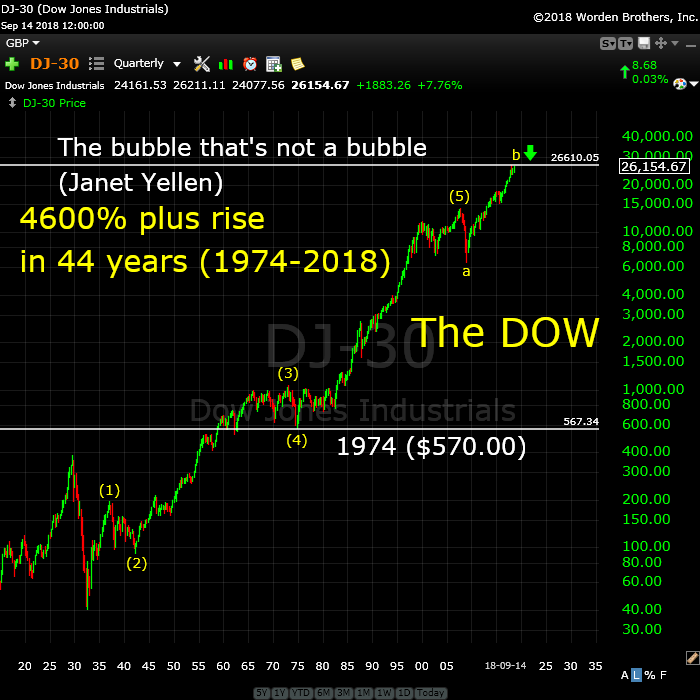 Above is a quarterly log chart of the DOW, showing the five waves up from 1932. This is the fifth wave of a three-wave impulsive sequence that began about 500 years ago.

What’s interesting to an Elliott-waver is that wave (3) is exactly 2.618 X the length of wave (1) and wave (5) is again about that same length. The “unnatural” B wave tacked on the top end has been inflicted by both the governments and central banks in collusion. But the history-making bubble is just about at an end.

Elliott wave analysts know that when you have a correction, it always reverts back to the area of the previous fourth wave of one lesser degree. That level was in 1974 when the DOW as at $570.00. I’ll let you mull that one over …

We’ve inflated away the value of our currency to the point that it’s worth four cents of what it was a hundred years ago, a few years earlier than the start of the above chart.

Much of the rise in this market is due to inflation. If you expect more inflation (and waves to the upside), you’ll have to wait for a very large correction in order to do so, because this wave count is all but done. It even has a B wave extension, which is a first time in history event. But even it’s at a full count.

I expect this market to turn over before Christmas. The crash may be early in the year, but the top is almost at hand.

The Dollar Leads the Way

The US dollar is fully in charge of both the equities and currencies markets. They’re all moving in tandem, as I’ve been saying since September of 2016. For a short while, currencies were moving contra to the US market, but gradually all the assets classes have started “drinking the cool aid” and aligning themselves so that they’ll all top at the same time … internationally.

If you do not look at the overall market and the asset classes that matter (oil, gold, USD currencies, and the US equities —as well as international indices), you will have no real idea where we are. For assets do not just crash midway through their wave structures. They all finish up five waves together and then turn down in a very predictable, organized manner. Worldwide sentiment becomes more negative than positive and the trend changes.

Even intraday now, I’m seeing almost all the assets I cover moving as one … in a parade to the top – eventually. But, unlike a parade, the market doesn’t move in a straight line.

About three weeks ago now, my blog title on the free blog was “Turn of the Century.” Well, haha, I was just a little early. That turn is still about to happen. At the time, I said I didn’t know exactly how it would happen, but I knew just about everything would turn at the same time. Eventually, we’re all going to complete the final 5th wave together.

It looks now like the top of the B wave will have just about everything lined up. USD currencies, the US indices, oil, gold, and the US dollar itself should all turn at the same time.

We’re closer to the top than many think. The impulsive structure of the NDX suggests that, once we trace out what might be a more complex fourth wave, we’ll have one more wave up to a new high. After that, it’s a multi-year bear market ahead … 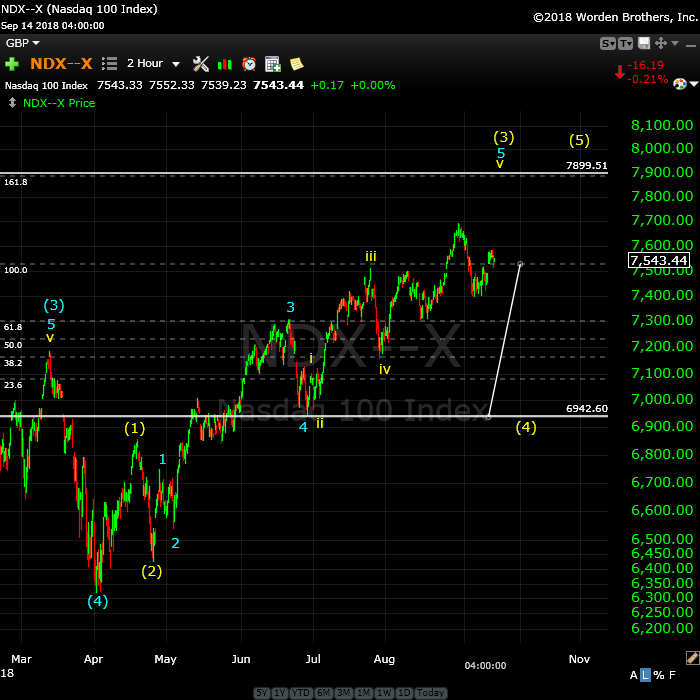 There are several ways to label this final set of waves up to the top of wave 3. I believe we’re in the fifth wave of the third wave with a top coming with a new high. That would lead to a larger fourth wave down, which will parallel the movement of ES/SPX as they complete a C wave of their fourth waves.

These waves are the final two before the top of the 500 year rally. The fourth wave will likely come down “hard” as many of the FANG stocks are also set up for a turn to the downside. They’re all setting up for a turn at the same time, by the looks of it.

In any case, after the final 5th wave up in NDX is complete, we’ll turn down into the bear market I’ve been talking about here for the past three years! 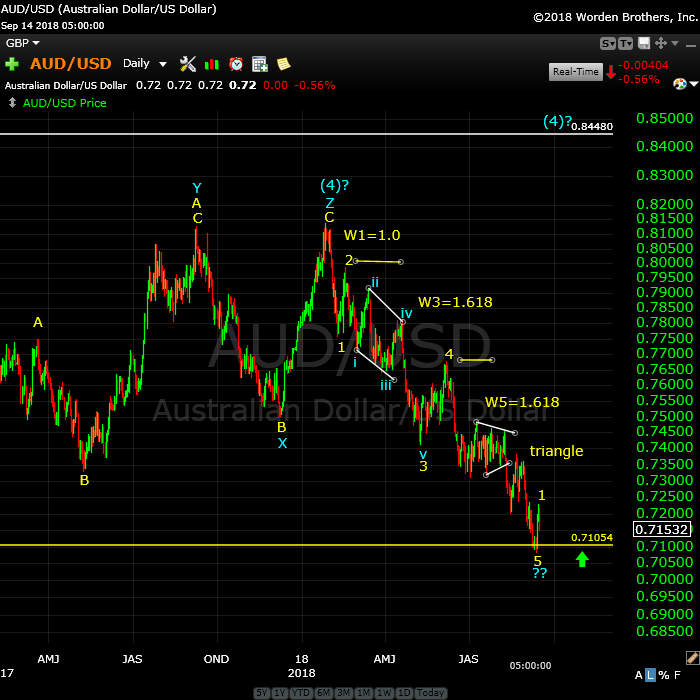 Above is the daily chart of AUDUSD. Last weekend, I showed the AUDUSD chart and called for a turn. This week, we got the turn and have now finished an impulsive first wave up and a second wave down to the 62% level from the turn. Much more upside is to come.

For details, you can go back to last week’s blog post.

No change from last week. We're still waiting for the fifth of the fifth wave to a minimal new high before a turn down in the long-awaited C wave of a flat pattern.

My preference is for this unfolding fourth wave pattern is that of a expanded flat. However, technically, it could also be a running flat. At the present time, the B wave (that's the ABC wave up from about 2532) is longer than the A wave (marked as the 4th wave down from January 29, 2018). A regular flat registers as an expanded flat when the B wave is over 105% of the length of the A wave—ie, the B wave would need to reach above 2889, which is has done.

Volume: Volume has ticked up with Wall Street back at their desks after the summer break. However, it hasn't changed much in terms of market direction. This market is so weak, we'll likely need that volume to make it up to our target.