Man-made warming is still fairly HOT as a topic of conversation. It’s about the only thing that is hot, since the earth has been cooling for about the last fifteen years, or so. And yet, the fear-mongering continues on.

Governments (who are always the last ones in, usually after the barn door has closed and the horses, rats, and everything else have left for more realistic pastures) are now focused on imposing carbon taxes as another ill conceived means of raising more money for something that will have little to no effect on climate. I can’t argue with the benefits to the environment from a pollution standpoint, but that’s another article.

In terms of the U.N. report (from IPCC), it’s not holding very much water anymore. These reports get weaker and weaker (they come out every few years), certainly after the uncovering of the inconsistencies in the Michael Mann hockey stick debacle.

Many well-known scientists have now changed sides in the ongoing debate about man-made global warming.

In terms of the projected changes to climate over the coming years, you can view a short video from Cliff Harris here (he’s one of the leading climatologists in the US).

Lord Christopher Monckton (the Lord Monckton Foundation) speaks all over the world about climate change and the ludicrousness of the idea that any appreciable change is attributable to man. Here’s his one hour, very entertaining talk on the dubiousness of the IPCC report (I’m being kind to the report here).

Here’s an interesting article regarding a debate between David Suzuki and Bill Koutalianos in Australia, in September 2013.

You can find more support for the “wild idea” that man does not control the Earth and everything on it at Friends of Science.

Dr. Don Easterbrook spoke before the Senate Energy, Environment & Telecommunications Committee on March 26, 2013. The one and a half hour video of that event is here. Dr. Easterbrook is a geology professor emeritus at Western Washington University.

He writes, “We are entering a solar cycle of much reduced sunspots, very similar to that which accompanied the change from the Medieval Warm Period to the Little Ice Age, which virtually all scientists agree was caused by solar variation. Thus, we seem to be headed for cooler temperatures as a result of reduced solar irradiance.”

Here is a chart of his projections for the future (the blue line). The black line displays the actuals to 2013. The red line are the projections of the IPCC. 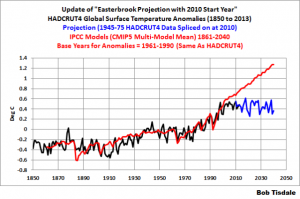 The Bottom Line
The bigger problem on the horizon is that it’s getting very dry across the planet. This change in climate has been forecast for decades (the well-respected work of Dr. Raymond Wheeler and the Weather Science Foundation of Crystal Lake, Illinois (now defunct). In fact, it’s cyclical (as all climate is) and so forecasting the change is no great climatological feat. It’s a cycle. Climate changes on a regular pattern over many years.

Extremely dry weather leads to a depression. Always has. Just look back at climate through history. We’re at the start of the depression now and it’s about to get a lot worse.

Add to this the largest debt and stock market bubble in history and it’s not rocket (or climate) science to expect some very tough times ahead.