No Country for Old Men

OK … I meant “market.” No market for the feint of heart. But one of my favourite movies, nonetheless.

We’re at a US market top. Everything’s a little out-of-whack. It’s fairly even bulls and bears and the waves aren’t very long, there’s virtually no volume … because everybody’s “in.” So, unless you really know what you’re doing, it’s a really good idea to stay well away. I learned about overtrading a couple of years ago and found out it’s a really dumb idea. Patience.

But the markets are setting up. They have a long way down to go down, and once the first set of waves is in, the downtrend will be confirmed; the path will be clear.

Don’t get me wrong; to me, the path is already clear. However, right now it’s not a fun market to trade.

Now, let’s look at where we are tonight. I’m going to make this fairly short as not much has really changed from the weekend. We’re in a second wave, with a big third wave down on the horizon. Second waves can be brutal and they come down when they’re good and ready.

In a bear market, they typically end up with two spikes. That’s because the wave down following is so large. The pendulum needs to swing to the “hurt stage” … to get everybody on the train, and then it reverses. Ah … what we all love about the market.

I’m just going to post three sets of charts tonight:  The SP500, the NYSE, and the Nasdaq. For a medium and longer term view of the markets, you can click my previous post here. 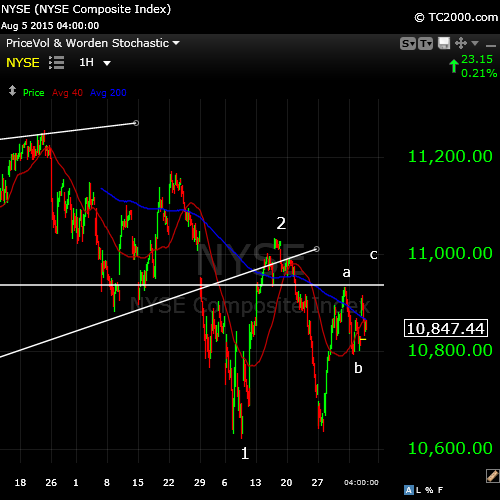 The NYSE (above) is the first chart I look at … the exchange is the largest in the world. It usually gives a very clear picture of what’s really going on. I’m showing the top in the upper left (the end of a very clear ending diagonal) and then a first wave down and a second wave up. The second wave is not quite finished and I expect the c wave up to continue to either test the a level, where the horizontal line is or, more likely, test the top of the second wave. That will set us up for a large third wave down. 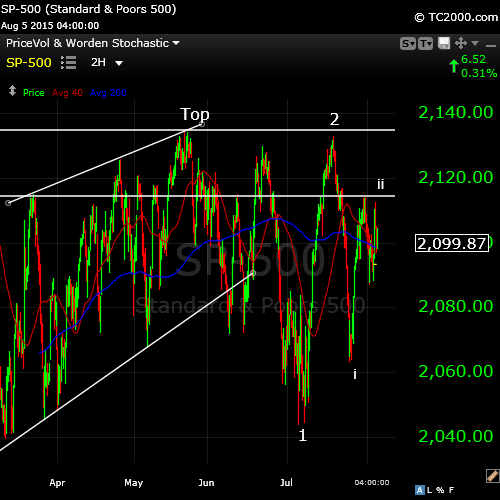 Here’s a 2 hour chart of the SP500. It’s set up in a similar fashion to the NYSE. I’m showing the most recent wave up as wave ii (a smaller second wave). The wave could end there or retrace all the way up to test the second where the 2 is on the chart. However, it should not go to a new high. 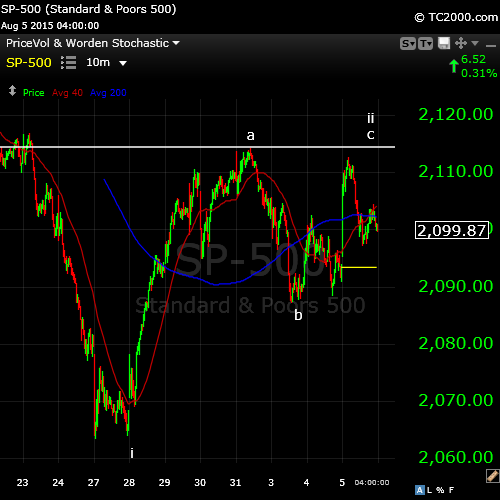 Zooming in to the SP500, you can see the wave set-up. The c wave here is overlapping and the waves appear to be in 3 waves, as does the small first wave (the start of the a wave up). To go to a new top, this wave should be in 5 waves, but it’s not. It’s a countertrend wave. We just have to wait for it to end. 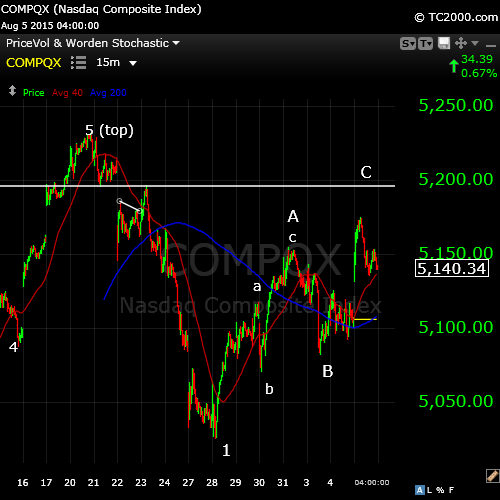 The Nasdaq appears to be attempting to get in sync with the other indices by forming a second wave here. You can see very clearly that the first wave up, the A wave is in three waves (abc).  This is a countertrend wave and will likely end at the horizontal line. It should not go to a new high.

That’s a short and sweet look at the markets. Being in this “country” requires patience. The opportunities are yet to come. We should head up Thursday. The labor report Friday morning at 8:30am EST is a likely spot for a turn.