The Beginnings of Financial Slavery 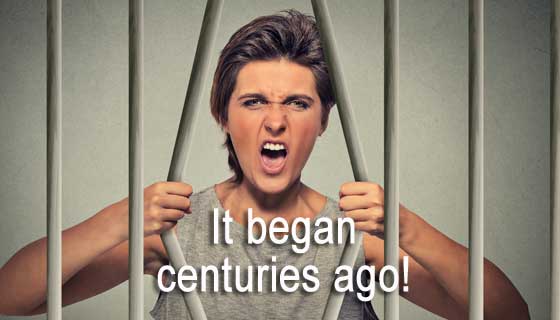 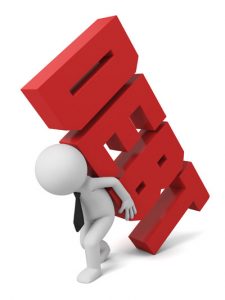 The core of the problems affecting societies around the world today are a result of usury—the lending of money at compounding interest. This has been a recurring problem for centuries. If you study history (and cycles of history), you’ll find that the rise and fall of money-lending parallels the rise and fall of great civilizations.

There has been a movement by central bankers over the past 300 years to stamp out societies that don’t allow usury (most notably Islamic nations). These bankers have colluded over the past century to devastate western societies through the practice of driving governments into heavy debt and sucking huge interest payments from them, which eventually drives these nations into ruin through inflation.

Once these nations are under the full control of central bankers (Greece is a good example), they begin selling off the country’s assets. Greece has had to sell all its national airports to interests in Germany, for example.

We’re at a point where the monetary systems of western nations have been debased so badly that citizens have been driven into poverty while the elite have increased their wealth through ownership of assets that increase in price during a highly inflationary process.

However, that trajectory is about to reverse.

The US dollar, for example, is now worth about four cents (it has reduced 96% in value in only 1oo years). In other words, as a result of inflation, the cost of living has risen so much that the population has been driven into debt that is unsustainable. We’ve already moved into a deflationary environment (particularly in Europe) and, along with trade wars, mortgage defaults, bank failures, and credit freezes, the process of robbing the people of their livelihoods is going to come rapidly to a grinding halt.

The result, for those who are unprepared, will be financial ruin, which will lead to yet another financial revolution. If you’re prepared, it’s a chance to change your financial situation many times to the better.

As I’ve alluded to again and again in this blog, this is a man-made cycle. It parallels the natural civilization and climate cycles and for that reason, on a grand scale, is highly predictable.

But let’s go back to the Roman Empire and review how these financial cycles revolve. I’ll pinpoint some of the highlights. 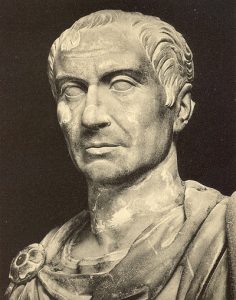 Society had become extremely fragmented at the top of the Roman Empire and there were civil wars (eg.- the Social War (91-88BC) and then the Spartacus revolt in 73-71 BC). When Julius Caesar returned to Rome after his battles to secure Gaul (France), he found usury rampant (interest rates were as high as 48%) and, as a result, there were 300,000 poor people being fed daily in the granary.

There were two main political parties in those days: the Optimates (nobility, the Senate, etc) and Populares (the citizens). Caesar was a populist emperor and fully understood the evils of high levels of interest charged on loans. In fact, when he got into power, he outlawed usury. He also doubled the pay of soldiers (and example of imposing minimum wage—a bad idea) but controlled the power of the mint to government. And he abolished slavery.

In 44BC, he was murdered by 60 conspirators who, as the elite, were angry at the financial changes he’d made. This marked the beginning of the Roman decline and was right at the top of the warm climate cycle, as I’ve shown in previous posts.

Rome then went on the gold standard, but there was not enough gold and so the percentage of gold in coinage was drastically reduced.  Industrial production suffered, and the population became poorer. Usury was rampant once again. Wealth was concentrated in just a few hands.

Over the next 500 years, successive emperors (and there were many, and for very short periods) debased the coinage, sending the population into higher and higher levels of poverty. Eventually slaves (the working poor) outnumbered citizens five to one.

The Angles, Saxons, and Jews

With the invasion of England in 1066 (top of the next warm cycle) that I wrote about last week also came the Jews, who were behind much of the financing. The consequences for the English were disastrous. The Jewish moneylenders charged up to 33% on mortgaged lands by nobles and 300% for workmen to buy their tools of trade.

By the beginning of the 13th century, many nobles were in danger of losing their land as a result of high interest rates and taxation. This ended in a revolt in 1215 and the signing of the Magna Carta. Its primary purpose was to cancel the contracts of the Jewish moneylenders and to abolish usury.

However, the laws were relaxed until 1275 when Edward I passed strict usury laws and all the Jewish moneylenders were expelled from England. 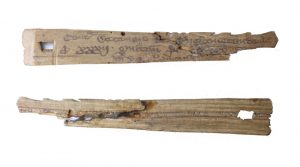 The Middle Ages was really a wonderful time in history. Climate began to warm up again slowly and, as it did a period of low taxes (and no usury) ensued. People had lots of money during this period and lived very well. The tally stick (shown on the left) came into usage as a way of keeping track of who owed what to whom (this was a tool that was used at various periods throughout history and contributed to a fair and just society). The use of tally sticks spanned a period of about 600 years in the Middle Ages.

By the time King Henry VIII (1509-47) came to power, things were turning sour financially. I’ve written here about the parallel of this time in power with that of President Trump. The Roman Catholic Church was in power and Henry VIII decided to break with the church to escape high taxes. He relaxed the laws of usury.

During the reign of Elizabeth I (1588-1603), the Jewish moneylenders returned to England and many became goldsmiths, accepting deposits of gold for safekeeping and then lending it out in loans with interest. They quickly realized they could lend out receipts rather than gold in greater quantities than the gold they had, and so started fractional reserve banking. Interestingly enough, the reign of Elizabeth I was the top of another warm 515 year cycle. The economy was about the turn ugly as the climate turned colder, as it always does.

The rate of interest merchants paid once again crept up to 33% per annum.

The Bank of England

In 1694, the Bank of England came into being. It was created to lend King William unlimited sums at 8% per annum so that he could go to war with Louis XIV of France. France, at the time, was not on the usury system. This became a pattern going ahead several centuries, in fact, right up today. Central bankers love war, because they often profit from both sides when they invariably borrow the funds they need to wage it.

“Significantly, most of these wars were started against countries that had implemented interest-free state banking systems, as was the case in the North American colonies and France under Napoléon. This pattern of attacking and enforcing the banker’s system of usury has been deployed widely in the modern era and includes the defeats of Imperial Russia in World War I, Germany, Italy and Japan in World War II and most recently, Libya in 2011. These were all countries that had state banking systems, which distributed the wealth of the respective nations on an equitable basis and provided their populations with a standard of living far superior to that of their rivals and contemporaries.” – Stephen Mitford Goodson, A History of Central Banking

Buried in the Bank of England bill were a range of brand new taxes on ships, beer, and liquor (and many more on everything from marriages to deaths, to pedlars and bachelors) which were to be levied on the citizens to pay the interest on the borrowed money. This is the same system that was later used when the Federal Reserve was set up in the US in 1913 (when income tax was introduced in the U.S.).

The Bank of England became the model for western banking for centuries to come.

Two years after its formation, the Bank of England had almost £2 million circulating on gold reserves of only £36 thousand (that’s fractional reserve banking for you!). A series of wars began, of course, including the War of the Spanish Succession (1701-14) and the American War of Independence (1775-83). By the time they were finished, there was 50% unemployment and the national debt has risen to £175 million. 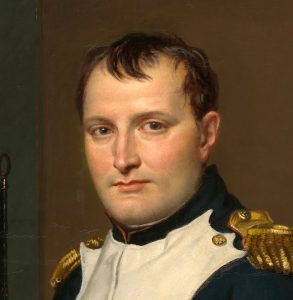 The war against France (1792-1815) was for the primary purpose of destroying Napoléon’s interest-free system of finance.

“One has only to consider what loans can lead to in order to realize their danger. Therefore I would never have anything to do with them and have always striven against them.” — Napoléon Bonaparte

One of the first things Napoléon did when he came to power in 1799 was to take control of the banking system. He created the Banque de France, which replaced the fifteen, mostly Jewish, private banks which had been charging extremely high rates of interest leading up to the French Revolution (1789-99).

The Rothschild family, who had become extremely wealthy bankers by loaning money to England and other countries involved in war, were excluded from contracting loans on the European continent, a “prize” which would be worth a fortune. It wasn’t long before Napoléon began to get into trouble for not frequenting the loan market abroad and relations really soured when he refused to sign a trade treaty.

In 1802, England, under the direction of international bankers (the Rothschilds), proceeded to bankroll Austria, Prussia, Russia, Spain, and Sweden and soon declared war on France.

It took about 10 years, but gradually, with Rothschild money as the backing, a series of coalitions of countries destroyed France and Napoléon was forced to flee the country.

“Give me control of the economics of a country, and I care not who makes her laws.” — Nathan Rothschild

Napoléon died in exile fit at the age of 51 and when his body was exhumed, it indicated that he’d almost certainly died of cyanide poisoning. Similar ends have come to others in high offices all over the world after tangling with the likes of the Rothschilds.