The Manipulation of Your Money 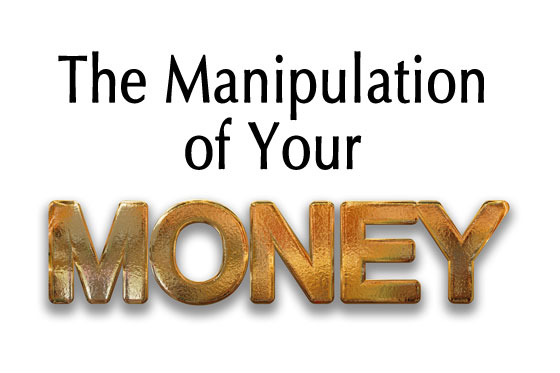 We’re headed for a long period of spiralling deflation …

A good example of this is the current housing bubble in Canada (it’s popped on schedule in 2018) created by next-to-free credit. Mortgage interest rates have never been lower and the prices of houses have never been higher.

Lets look at how we cause inflation.

Banks create money out of thin air. In actual fact, they create debt. They do this through loans. In other words, money comes into the economy when banks create a loan. They simply enter the loan amount as debt in their books and you, the customer get borrowed money on the other side of the ledger. A digital entry appears in your bank account. Instant money from nowhere!

You pay interest on that money and both interest gets paid to the bank and the digital money disappears to where it came from … nowhere (it ceases to exist). In any event, it’s newly “minted” (today, it’s mostly digital) money that the banks create out of thin air and then charge you for its use.

For more detail on  how banks create this money, see my post on “How Banks Create Money Out of Nothing!”

When interest rates are really low, people borrow more money (mortgages) and bid up the price of homes. People see it as an inexpensive way to buy the home of their dreams. But is it?

Lets look “under the hood.” The increase in money in the economy causes the value of money to decrease. We realize that lower value through higher prices for assets.

The good thing is that as long as the inflation keeps up, you’re paying back that loan in “future money,” which is gradually decreasing in value. Inflation makes is easier to pay back debt (and that’s why governments like to inflate and amass large amounts of debt — they can pay back that debt in less valuable money in future).

In the chart above, you can see how inflation has been fairly consistent except for the period from about 1920 to 1936 and again around 1940.

Deflation is the opposite of inflation. In deflation, particularly in a credit-based economy, which is what we have, there’s eventually a loss of confidence in the bubble that’s been created, and a slowdown in lending (which has been an ongoing problem since 2007). This leads to less money in circulation and people start spending less and hoarding money (Europeans are somewhat ahead of the North American continent right now in this regard). The reduction in consumer spending leads to job losses, eventually company failures, even lower prices, and we end up in a deflationary spiral that feeds on itself.

Above is the M2 chart of the velocity of money. It comes from the Federal Reserve in the United States (FRED). This is a measure of the levels of currency available in society at a given time (it actually measures how many financial transactions are taking place — higher levels are inflationary, lower levels are deflationary). You can see how the velocity of money has declined since about 1998. Incidentally, that was the warmest year on record, which I explain in by post: “Don’t Like the Climate? Wait a Cycle.” A reduction in the velocity of money marks the onset of deflation.

Lower prices for goods and services is great for consumers who have cash. But if you have lots of debt, that’s a problem. Because the real value of debt increases—because less money in the economy increases the value of money. So, you’re paying back those loans with money that is more difficult to obtain (and is actually worth more) than when you took out the loan.

Assets like houses and cars reduce in price. The deflationary cycle in a depression picks up steam until we have a deflationary spiral that historically has reduced prices by up to 80%.

Almost all recessions and depressions in the US throughout history have been accompanied by various levels of deflation. Here are some key examples:

Examples of US Depressions Fueled by Inflation (Ending in Deflation)

History tells us the road is fairly clear regarding the immediate future: Free money leads to a bubble, which leads to deflation and a depression. When a deflationary environment takes hold, gold is reduced in value. Gold will regain its value and start to increase when we return to an inflationary environment sometime down the road. 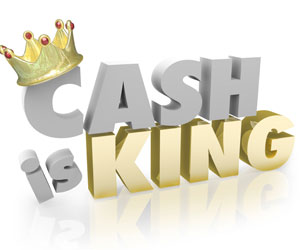 Strategies in a deflationary environment:

Cash is king. Currency goes up in value, while prices for just about everything that’s not a necessity, go down in value. Food is a notable exception. At the same time we have a major economic collapse, we also have a major worldwide drought. This raises the scarcity of food. Expect banks to stop lending and for the current credit card scheme to end. It’s a good idea to have cash on hand in a safe place just in case banks start to fail, as they have so often in the past.

Get out of debt, because debt becomes a lot more difficult to pay back. As money increases in value (deflation), you’re paying back your debt in more valuable (and harder to come by) money. In an deflationary environment, many companies fail and there are far fewer jobs to be had. Salaries also tend to decrease. There simply isn’t the same level of currency in the market.

Reduce your cost of living. Taxes are going up. The only way they have of solving that problem is to tax the population. Banks, if they run into problems, will raise interest rates. They’ll also start to limit credit and call in loans. It’s better to rent than to own during a deflationary period, as prices of all hard assets go down in value substantially.

If it makes sense, sell your home and buy it back in a few years at a fraction of the current selling price. In the 1930s, homes devalued by over 80% very quickly. Many homes previously owned by the fabulously wealthy or well-to-do (who has lost everything is the stock market crash) were on the market for fire sale prices. We expect to see this scenario once again. During deflation, all assets drop dramatically in price. You can already see this in the price of oil.

Hold off on major purchases … because things are going to get a lot cheaper. As people stop buying, products go down in value. Double this with the fact that currency is going up in value and you have lower priced services and products.

Traditional investment is dead. Stock markets are in the process of topping. We’re going to see a crash sometime in late 2020 or early 2021. Lower demand right across the board will lower the price of most products and services. As a result, more and more companies will land on hard times. Most bonds are also vulnerable. We’ve already heard of major cities going bankrupt. If you read your history, you’ll know that no investment is safe during a major collapse. That’s why “cash is king” (it increases in value).

Community is exceptionally important. Mend any broken relationships with family and friends. You’re going to need them. Have services that you can offer to others, to make yourself a more valuable commodity. Blue collar jobs (fixing things) are always the first jobs to come back after a depression.

In reality, deflation is cathartic, and a necessary condition to heal the economy.

These are only some of the strategies you can use to defend your wealth and sure your viability during an major downturn. I hope it provides a sense of what’s to come.

So don’t get fooled by the idea that inflation is a good thing. It’s ruined the world economy. We’re awash in debt. Thank you politicians and bankers!

Deflation is good .. if you’re prepared. The train is just leaving the station …. It’s time to do some research and get ready to buck the trend.

The current situation with our economy is not unlike many of the previous collapses in history. But what makes this particularly scary is that we’ve created a debt bubble larger than any in history. See the recent article on the International Monetary Fund blog entitled, “New Data on Global Debt.” This isn’t the first time the IMF has warned about the extreme debt around the world.

What exacerbates the problem is that sovereign debt, by and large, is owed to private “banksters” in Europe (or in the case of the US, to twelve private banks in the US packaged into something inappropriately named “The Federal Reserve.” It’s not federal (it’s privately owned) and it keeps no money in reserve).

These central banks create money out of thin air and then charge governments for its use. Creating money is something the government could do on its own and there would be no interest, and of course, no debt. This is something I explain in my upcoming, related post:  The Wonderful World of Oz.