The Uphill Battle Continues in SPX

For three weeks, we’ve watched the D wave of the contracting triangle in ES and SPX try to top. We’re very close to turn and Monday might just be the day. Good riddance to this wave!

With almost every up and down move in the past three weeks in ES, alternate measurements keep targeting the 2750 area. This has been the ultimate target right from the start. This action tells me we have an extremely weak market that is struggling to get to the target.

As a result, once we see the turn down into the E wave of the triangle in ES/SPX, the drop is likely to be sharp. However, the E wave has to be in three waves, so we’ll trace out an ABC wave to below 2600. 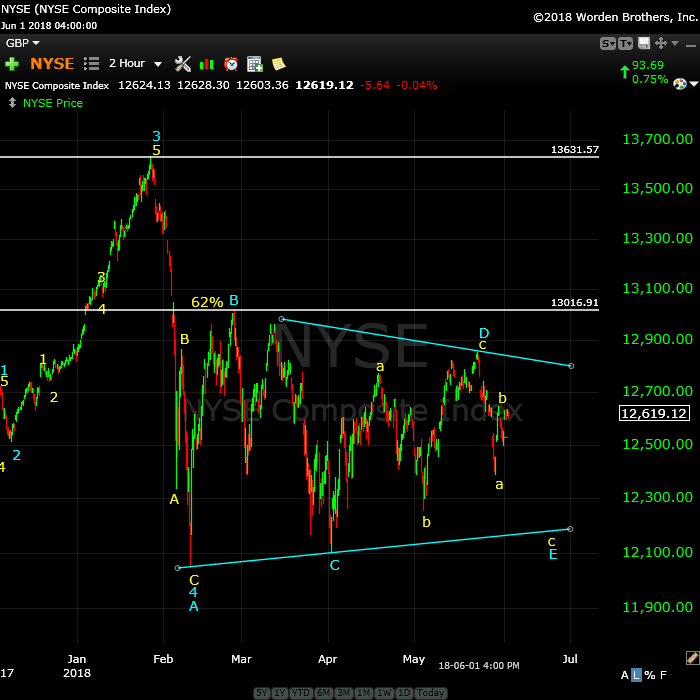 Above is the two hour chart of the NYSE. This is the mother of all indices, and if you have any doubts about where we are, just take a look here. It doesn’t have the typical “animal spirits” attached to it (as it’s not traded directly) and comprises all the other traded indices (SP500, DOW, RUT, RUA, etc.).

We’re in a fourth wave contracting triangle, currently in the E wave, with one more leg down to go (a ‘c’ wave). The SP500 is at the top of the D wave, attempting to reach it’s target, but the weakness has kept it from achieving its goal. When it does, expect it to drop sharply into its E wave down. 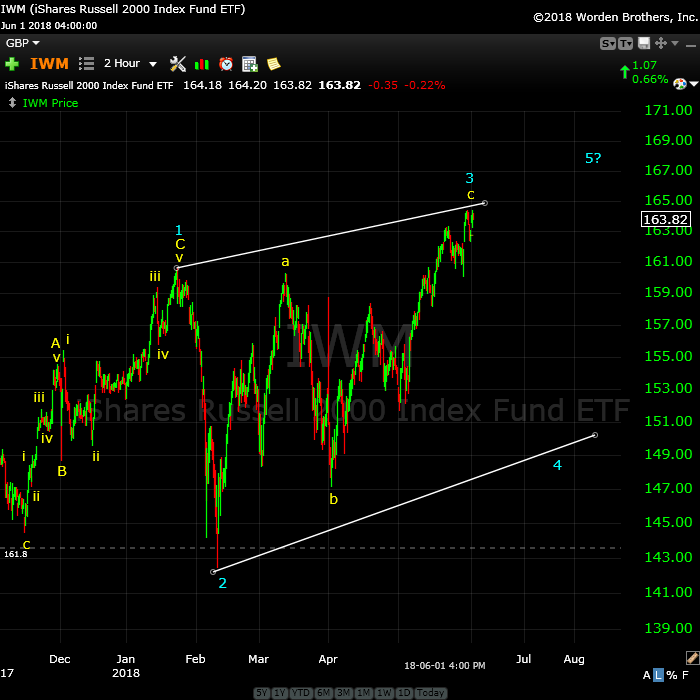 Above is the two hour chart of the Russell 2000 (RUT), showing the ending diagonal in play. In the Elliott Wave Principle (Frost & Prechter), the lump ending diagonals into the motive wave section of the book, but it’s really a corrective pattern.

The pattern has overlapping waves; it’s too weak to rally in a clean third wave. The waves are really collapsing on each other, due to the inherent weakness. You’ll find that pattern at the ends of trends, either corrective, or motive.

The ending diagonal will have a large fourth wave down to the lower trendline and then and final fifth wave up to a new high and I would expect a throw-over (a 5th wave that extends slightly beyong the upper trendline. When it does so, it will mark the end of the five hundred year trend that I’ve written about extensively here.

Almost two years ago now, I posted a video illustrating the fact the all the major asset classes were beginning to move closer and closer together in a sort of parade to the top. It’s exactly what’s happened, but we’re not quite complete yet, of course.

While the US indices head down from the top of the D wave, I don’t expect a lot of movement in the USD currency pairs. They’re finishing up a corrective move down and are more or less waiting to bottom with the E leg of the contracting triangle in the US indices. The should enter the 5th and final wave up together.

What I see is everything moving (or sitting, waiting) to get into position for the final wave up — the 5th wave in the US indices that will rally from the bottom of the E leg of the triangle up to a new high. It has quite a distance to go.

While that final 5th wave in the US indices rallies, we should see rallies in EUR, GBP, AUD, and CAD (CAD will move in the opposite direction). Oil will likely also rally in what looks like an ending diagonal pattern playing out. Gold and silver should drop to their targets while the 5th wave plays out.

But, they all have to reach their long term targets together.

We've now being going sideways at the top of the D leg of the triangle for three solid weeks. This signals to me that the market is exceptionally weak and having a tough time making it to the required target. I'm expecting one more wave up to complete the D leg. We're either targeting the previous high (2742) or 2750. There's a possibility we could reach as high as 2760.

Volume is exceptionally low (I've drawn a red circle in the volume indicator), which contributes to the volatility and lack of momentum at times.

Once we hit the target, though, we'll head down in the E leg. I thought the turn had to happen last week, because of the inherent weakness and the length of time going sideways. This market is extraordinary!

Summary: We're not quite finished the D leg of the contracting triangle. Topping out will result in a high probability trade to the downside (the E leg of the triangle) Once E leg (down) is complete, expect a final fifth wave to a new high. That fifth wave up to a new high will be the end of the 500 year bull market.