The US Dollar: Key to the Market

For over two years now, I have said, “Watch the dollar. Because when it reaches the bottom of its correction, that will be the top of the US equity market.”

I’ve also talked incessantly about “all the same market.” For the first time I know of, all asset classes are moving in tandem. It seems they are all going to turn at a top together. Even US treasury bonds are completely a trend and turning.

We have a turn starting to take shape to the downside in the US Dollar. That’s the second to last turn (the penultimate turn) before a US market top. The turn at the bottom (below $23.00 on UUP, or 11,500 on the US Dollar chart, or $88.00 on the Dollar Index) will be the top of the US equities market. 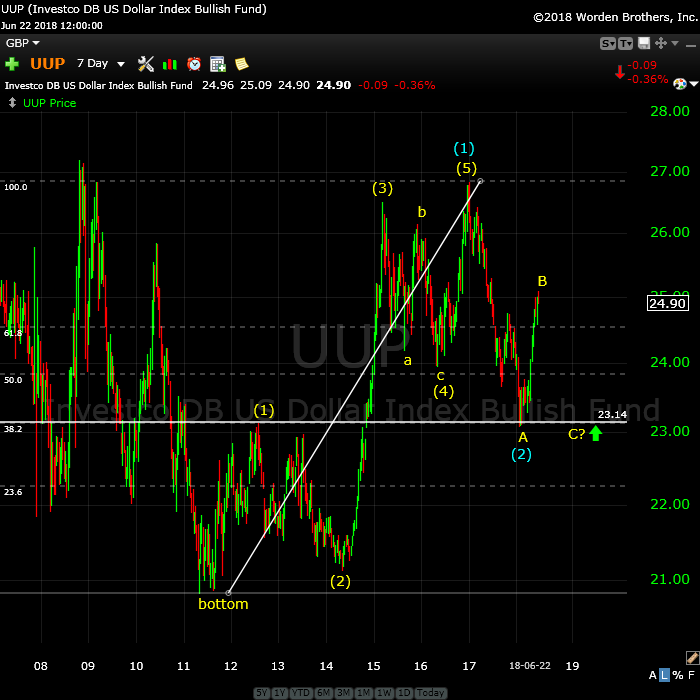 Above is a 7 day chart of UUP, the recognized US Dollar ETF that parallels the movement of the dollar. The patterns are virtually the same.

The chart shows five impulsive waves up, with a second wave arguably in place once we get a test of the low. That’s the bigger picture. The larger trend is up.

This is predictive of a large third wave that will travel well above the $27.00 level. If the US Dollar rises, it’s deflationary. When goes up in value, it means it’s scarce (there’s no enough money in the economy to satisfy demand). In other words, credit is drying up; debt is beginning to disappear.  Under our current international banking system, debt that is repaid simply disappears. For an explanation of how banks work, you can read my blog post on it here.

Now that my technical issues have calmed down somewhat, I’m putting the final touches on a new version of my webinar, “Navigating the Crash,” along with a second webinar, entitled, “The New Rules of Investing in an Uncertain Economy.” More info to come this week on both of these.

Ending diagonals are ending waves. I consider them corrective. In a fourth wave position, which we’re in, they foreshadow an imminent trend change. That’s a hard rule that will NOT be broken.

Right across the board, it’s clear: We’re in the final stages of this 500 year bull market. The US Dollar, as I’ve been saying for over two years now, will be the key to timing the top of the US market, and other markets around the world. The US Dollar is ultimately going to increase in value. That’s deflationary. So is contracting credit, which we’re seeing worldwide.

After all these markets top (or bottom, as the case may be), they will all move down together in what’s going to be the show of a lifetime. The drop in the eventual third wave (likely this fall) will be labelled “the crash” and it’s likely to be breathtaking in it severity.

We  wait, ready to pounce. The third wave of the ending diagonal is not yet complete. It's been a bit of a cat and mouse game. However, the mouse is really weak has been careful about showing itself. Starting this weekend, however, it may be on the move up to the target.

Friday's market hardly moved except for the last half hour or so of the day. It seems it was all about a turn ... perhaps right across several asset classes. In the last half hour, ES gave us the signal it was going to start heading up in the final leg. However, we may see a little more downside before that move up happens.

The early part of this coming week should see the final move up in the third wave of the ending diagonal.

The target is still above about 2803 or so and will lead to a strong 4th wave down, which I've been saying for weeks now. This third wave has been one for the history books, and not in a good way. It's been frustrating to say the least.

ES is extremely weak. The SPX/ES/SPY is the laggard, as the other US indices, for the most part, have hit their targets on the upside. This week should finally see the resolution, based on what I'm seeing this weekend.

Summary: We continue to trace out the third wave of an ending diagonal. We're waiting for the third wave to top. Topping out will result in a high probability trade to the downside (the fourth wave of the ending diagonal). Once the 4th wave (down) is complete, expect a final fifth wave to a new high. That fifth wave up to a new high will be the end of the 500 year bull market.