The prolonged wait is almost over.

Wave 5 seems to have begun quite suddenly, except for the Nasdaq, which I’ll explain in the final chart. Most of the indices have completed wave 4.

Wave 4 in a motive sequence of 5 waves is always the most complex pattern. There are 11 different configurations to choose from. I generally tend to stay away from them (for trading purposes), because they’re so difficult to forecast. This one was no exception. 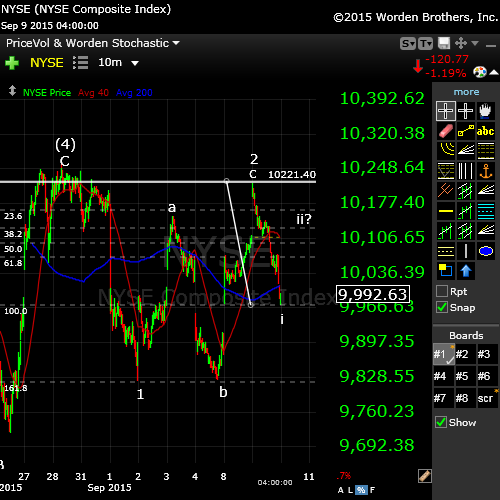 Let’s start with some sanity … the NYSE (above). This is the easiest chart of all the indices to decipher (the NYSE usually is). I’m using this chart as the basis for my forecast for the rest of the charts below.

The NYSE didn’t go to a new high today before turning down. This means that the C wave remains the top of wave (4) as labelled. The big picture is that from the top of wave (4), we’ve done one wave of 5 down and then a very large abc correction up almost to the top again. This would be wave 2.  So today’s wave would be wave i (or the first wave) of wave 3.

That being the case, after having been able to count 5 waves down, it should retrace 62% (wave ii? on the above chart) and turn down into wave iii of 3. The 62% retrace level is 10,128. The second wave top in any wave is always the preferred point to take a position in the market from an Elliott Wave perspective. 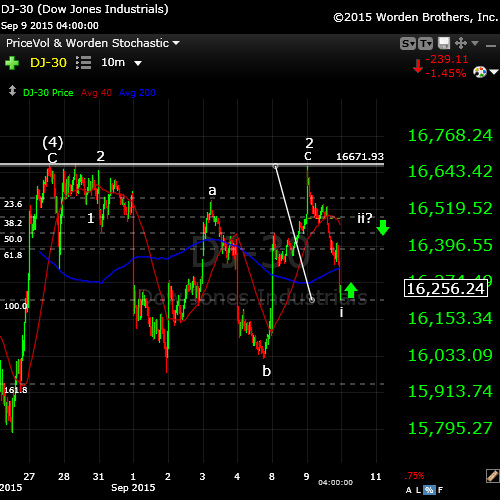 The DOW above has been more difficult to decipher. It’s similar to the chart for the SP500.  This index also did not retrace up to a new high, although it was extremely close to a double top. This leaves the top of wave (4) at the top of the C wave as marked on the chart. From the top of (4) we did one wave down. However, this wave ended up being in 3 waves, as far as my count goes.

What happens very often in a case like this is that if part of the wave is in five wave (the very top, for example), the wave will retrace to that point and that appears to be what has happened here (at least, that’s what my count reflects at the moment. In that case, we’ve had a very small wave 1 down and a very large double-pronged wave 2 set-up. This means we have done the first wave (wave 1) down of wave 3.  We should retrace now into wave 2. The 62% wave ii retrace level for the DOW is 16,493.00 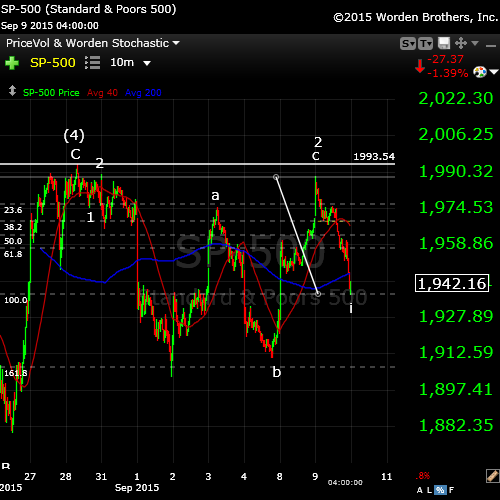 The SP500, as I said, is similar to the DOW. It did not retrace to a new high and so, being able to count 5 waves down in today’s wave, it looks like we’ve completed the first wave down (wave i) of the third wave. We should retrace 62% to about 1969 and then turn down into wave iii of 3.

As I write this tonight, two things are taking place that seem to support this count. 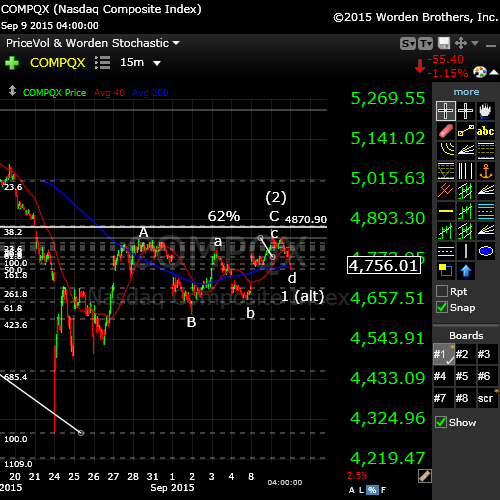 The Nasdaq is the “black sheep” of the family tonight. It’s the only one of the US indices that went to a new high today. It is also the only one that has retraced 62%, therefore putting it in a wave 2 position. I have labelled it as such. It means that as the other indices trace out wave 3, 4, and 5 of (5), it will trace out wave (3), (4), and (5). So it’s in sync, but it appears at the moment at different degrees of trend.

I may eventually change to labelling back to wave 4, but let’s see what happens going forward.

It also completed a wave down tonight. However, it’s difficult for me to count 5 wave down in this wave, so it may retrace to a double top.

I have place the alternative count on the chart, in case this is, in fact, wave 1 down. 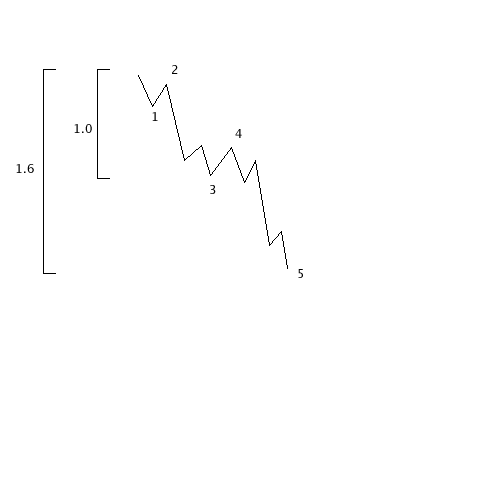 There’s an alternate structure to a first wave. Many times, they come down in 5 waves and simply retrace 62%. More often, though, I find they retrace only 38% to the previous 4th wave. You can see to the left that there’s one wave down to the “3” and then a fourth wave retrace, the “4” on the diagram. So watch for this today, as it’s certainly an option.

In this case, the fifth wave is as long as the first three combined and then the entire wave has to retrace 62%, which will bring it right back to the same 4th wave marker.

So, it’s a complicated market. However, the overall direction of the market is down, with wave 5 scheduled to take us to new market lows, while the Nasdaq follows along to much the same drumbeat.