The Train’s Pulling In

We have a very bearish looking triangle formed on all the indices. In the futures, it’s an upward sloping channel, which is also very bearish. 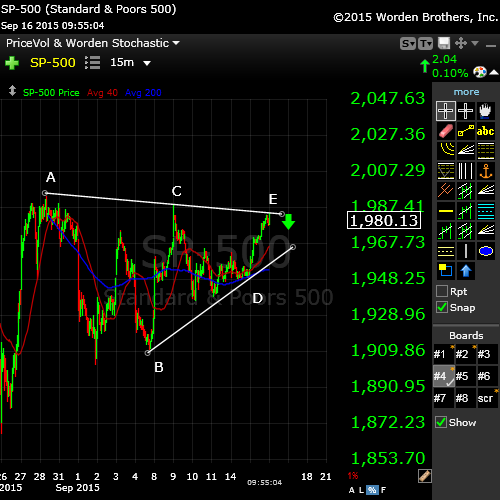 Take a look at the SP500 above. All the indices look very much the same. It’s an odd-looking monster, but still a triangle. You’ll see a version of this on all the major indices. The safest place to short a triangle is when it drops over the lower trendline. 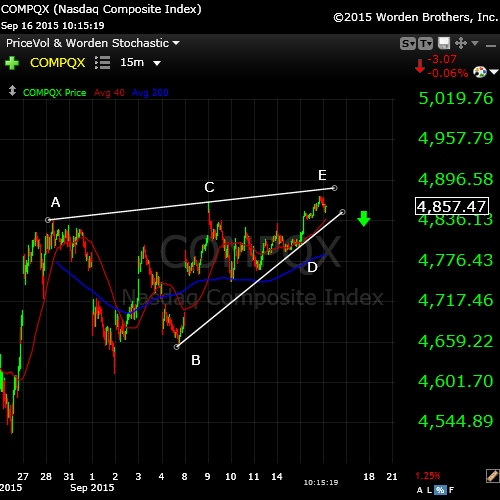 And check out the Nasdaq. That’s about the biggest, scariest wedge I’ve ever seen. I wouldn’t be long. GLD (gold) is also on the move up this morning.

Here are the time spans of all the waves in this first motive wave series down: 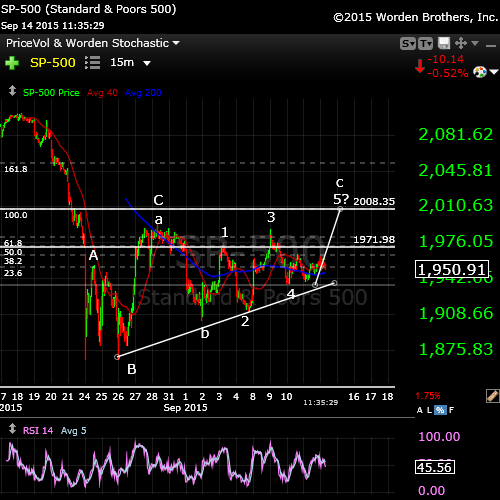 Looking at the SP500 (above), the most likely projection is for a top at either the top of the previous 4th wave (a) or a little higher to 2008. The case for the higher number is the c wave. c waves are typically in 5 waves (which makes them an ending wave, as wave 5 is always the end of a trend). You can count 4 waves so far. We are ending the fourth/beginning wave 5 up this morning.

Wave 1 and 3 are almost the same length (the third wave is always the longest wave) and a projection of the 1.6 times the wave 1 from the bottom of wave 4 takes us right to 2008. 2008 is the junction of the previous wave 4 down, which is a typical retrace point. All the waves are overlapping, which is typical countertrend. There’s no question we’re heading down and the Fed meeting on Wednesday is the likely turn point.

Original Post from Sept 11 (from here): The train’s pulling in to the station, I think. It’s not “All Aboard” time yet, but it just might be on Monday. And then there’s the Fed meeting on Wednesday.

Wave 4 patterns are always the most complicated structures in an entire motive wave sequence of 5 waves. However, this one takes the cake in terms of my history with the markets. It has been SO drawn out and there have been many twists and turns. It’s one of the reasons I simply stay away from trading within them. Wave 4 is the next to final wave in a motive Elliott Wave pattern—we still have the final wave down to go—wave 5.

The next couple of weeks look volatile:

Prognosis: The bottom line is that the trend is currently down. Once we properly finish the topping process on Wave (4), the market will head dramatically down to new lows. The issue is the exact timing—Monday through Wednesday. There is an alternate count which could make the turn point slightly higher.

Caveat: The expectation is that we will rally on Sunday to reach the (4) high. If we continue up over the next couple of days, we could rally as far as the 62% retrace level (another $30 or so in the SP500). That’s an alternate scenario that’s much less likely. I’ll explain both scenarios below.

I’ve got a couple of extra charts at the bottom tonight. The EUR/USD pair has a really clear path as of Sunday night (update) as it failed to turn down at Friday’s stated inflection point. It’s in a corrective wave pattern so it’s just a matter of time until it rolls over. Gold is waking up and should head up and the US market turns down. You’ll find the pertinent charts below. 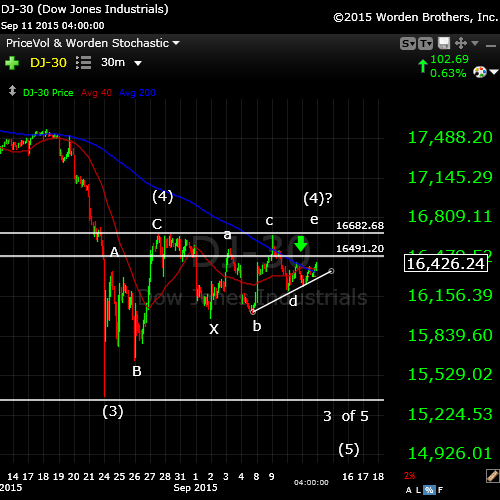 Let’s start with the DOW big picture. You can see the present top of the DOW wave 4 marked by a (4). I keep coming back to the first wave down from (4), which is X. I maintained at the start of this structure was a wave that came down in 3 waves (corrective).

Since then, it appears that we’ve been attempting to rally back to the top of (4) (weakly) in a sort of triangle pattern (abcde). With today’s turn up, which was unexpected, it changed the wave structure. I’m expecting wave e to complete in either a double top to complete wave 4 or continue slightly above it before a turn down.

The wave 4 top in the DOW is ~16,682. All the other indices have the same structure more or less and will all turn at the same time.

This will make the entire structure a “do over,” as wave 5 down will begin again at the top of (4) with wave 1 of 5 down. Depending on what the futures do this weekend, we may head down Monday morning. 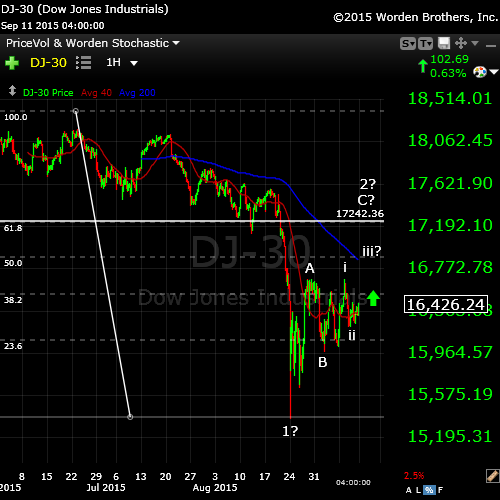 The alternate count is only a difference in the amount the final wave travels past the top of wave 4 in a continuation of wave C, again a corrective pattern.

An alternate stopping point is 17,242, which would be the top of wave 2 (62%). A turn at this level would result in a much larger set of waves down. I think this highly unlikely. But we’ll wait to see what happens Monday before we delve any deeper into that scenario. The interesting thing is that the 62% mark is also at the exact point the wave C would equal 1.618 times wave A (the market typically has these relationships). 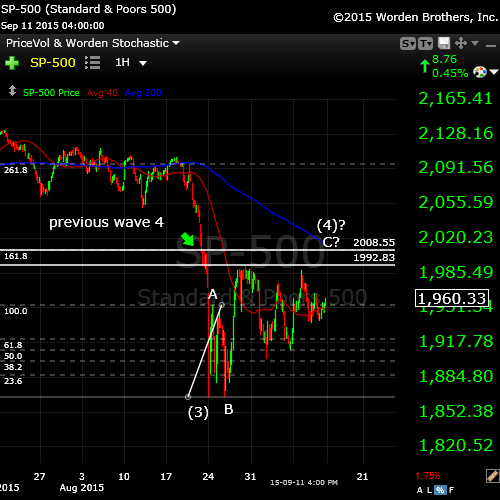 The wave structure changed today. The chart that shows this the best is the next chart: the SP500 futures chart. 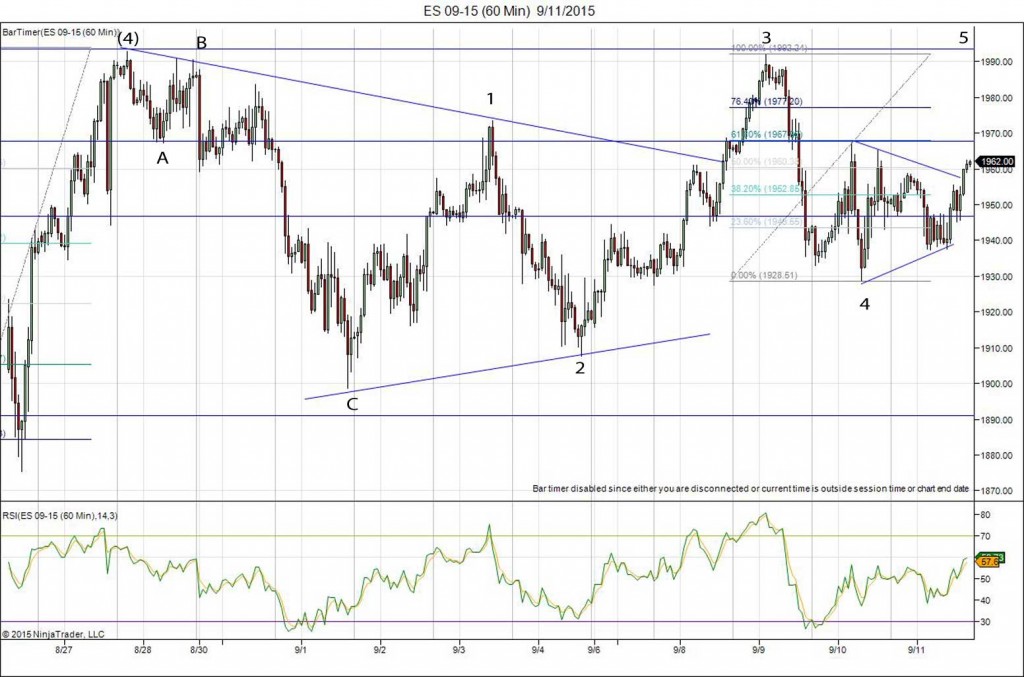 Here’s the ES (SP e-minis futures). This is a 60 minute chart showing all of wave (4), starting with the top, which is labelled. You can see the first wave down, which I’ve labelled as a 3 (ABC). It’s not motive-looking—the top portion is in 3 and so destroys the count for the entire wave. So, this means it must retrace, which tonight, I realized it’s been trying to do for a couple of weeks now.

So, we’ve got an ABC down and then we’ve got 5 waves up. The ending wave of any correction is always in five waves. The overall correction, from the very bottom of wave (3) not shown here, is an ABC correction, as well.

The prognosis: We’re going back to test the to of wave (4) and then we’ll start down in wave 5. 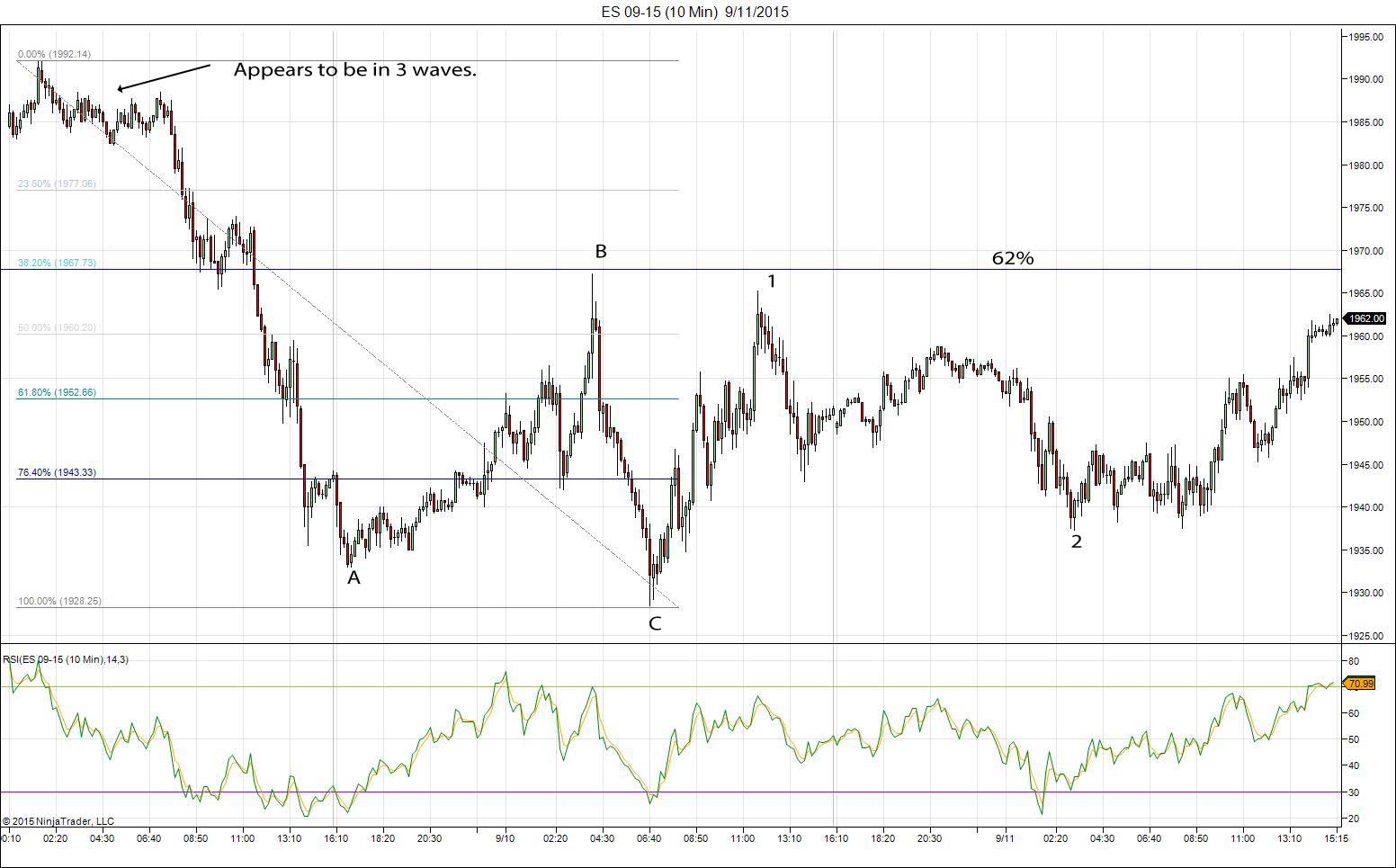 This is the closer shot of the ES (e-mini futures, ie-SP500). This is the last couple of days only. You can see that the wave that came down on the left (the A wave) looks to be in five waves, but then it went up 62% in a B wave (just to fake us out) and came way down to a new low (C), which made the entire wave an ABC corrective wave. Waves in 3 must retrace. 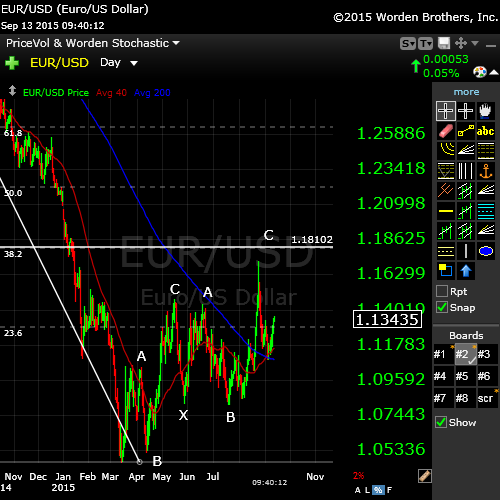 Update: Sunday, Sept 13.  Well, I thought the Euro had topped on Friday, but the move tonight completely negated that possibility. I like to take a position in terms of where a trade should go and then provide a level at which I’m wrong. Sunday proved me wrong with no loss.

So, we’re back to waiting. The big picture is that the EUR/USD pair is in a countertrend move (ABC) and so it’s just a matter of time before it rolls over and heads down, down, down. I would now expect the turn to be at the 38% retrace level (about 1.181).

The US dollar is in exactly the same position (in reverse) and we expect the next BIG move in the dollar to be up. But it too has to roll over first. 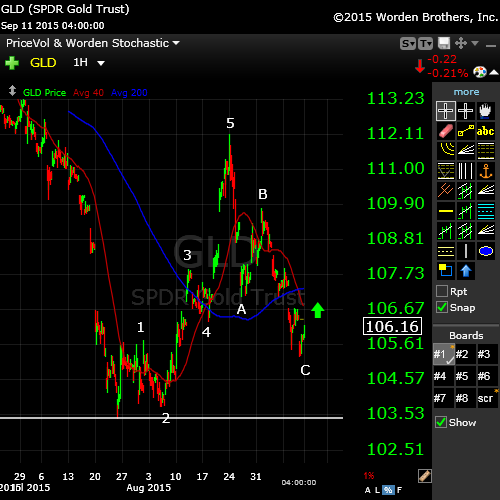 Gold (in this case, I’m using GLD) looks like it’s about the take off … finally. We’ve done 5 clear waves up from the bottom, which is a first wave up. Then we retraced deeply in an ABC corrective wave. Today, we started to perk up and I expect us to head up from here. 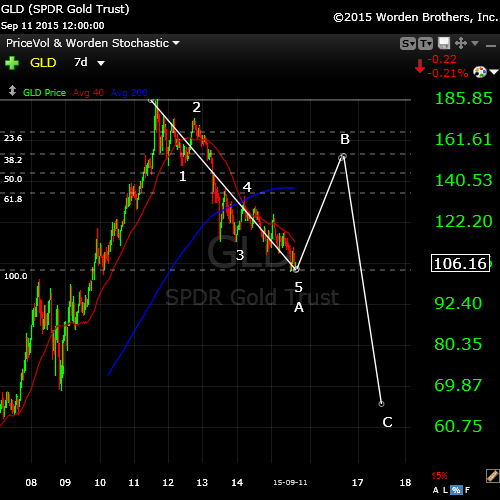 Here’s the longer term view of gold (in this case, the ETF GLD). We’ve completed wave A down (it ended in an ending diagonal) and we’re poised to head up in wave B, which should retrace about 62%, which would take us to about $153.50 before turning and heading down in deep C wave. The C wave should take us down past the previous fourth wave at about $69.00. The gold commodity should trace out a similar pattern.

Take care and be careful out there! Next week should be volatile.