What the English Empire Cycle Predicts For Today 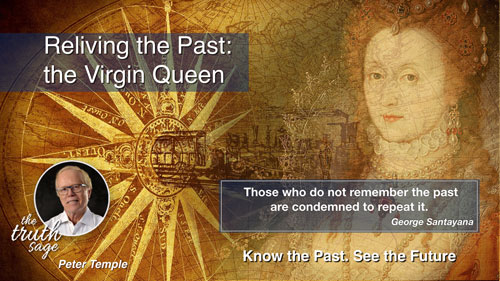 We’re currently at a one thousand year climate cycle high. The well-being of a civilization depends upon a positive climate that provides an abundance of food. Throughout history, when the climate turns colder and dryer, the empire of the day starts to decline in importance.

This English Empire (in the last 1500s) was at the top of a smaller 172 year cycle. The traits of cycle tops are the same; however, the magnitude of the changes at the current cycle top (172 X 6) is several magnitudes greater. You can predict the future to a great degree, based upon the past. That’s the importance of understanding cycles.

We're Reliving the Past in Cycles: History Repeats

Social mood follows climate temperature and has throughout the ages, as various degrees of climate cycles play out. I believe it’s actually electromagnetic waves that influence mood and it’s most obvious in the stock market. There are many who will play the market based upon the movement of the planets, which is where our climate comes from, and is also the main culprit in our biorhythms (and much, much more).

This video focuses in on a 172 year cycle top in England through the 16th and 17th centuries to give you an idea of what to expect as this much larger cycle top today (the 1030 year cycle) moves us from warm-dry climate to cold-dry climate.

Here’s a summary from the video of the patterns chronologically (some elements do not always follow the same order, but usually, they’re all there to some degree) that take us from tyranny and corruption through to more democracy and freedom.

As I mentioned, they tend to unfold more or less in the above order, but the order can change, with lots of overlapping.

Tops of Warm-Dry Cycles As They Turn Colder and Dryer

The very tops of 1000 year cycles are dry and hot. They gradually turn down into a winter cycle (cold and dry), a cycle that should last several hundred years. You can go back in history to similar cycle tops and analyze the economic and social pattern that unfolded then, using it as a guide for a similar cycle top hundreds of years later. History repeats and it does so with what we call periodicity.

In England in the 1500s, there were several forces opposing each other. The rulers of the day tended to move back and forth in their support for the different forces (for example, Roman Catholicism vs. Protestantism).

Henry VIII  (1508-1547): his reign was in a dry-cool period and it was quite tumultuous. He broke with the Catholic Church (and the Pope) due to wanting a marriage annulled. Thomas Cromwell was instrumental in setting up the Church of England and making Henry the head of the church.

Mary I (1553-1558): was a Catholic and attempted to reverse much of Edward’s progress with the church, but was opposed by parliament. Burned almost 300 heretics at the stake.

Elizabeth I (1558-1603): Last of House of Tudor. She was Protestant but was tolerant of Roman Catholics. She reversed the changes in religion made by her half-sister, Mary. Brought some stability to government. Ending up executing Mary, Queen of Scots, who a threat to the throne (would have been next in line), and this made James, Mary’s son the next in line.

James I (1603-1625): First of House of Stuart. He authored the King James version of the Bible, translating it from Latin to English. This helped strengthen the Church of England.

Charles I (1625-1649): Son of James I. He fought with parliament as a tyrannical absolute monarch. He married a Roman Catholic and started the English Civil War against parliament. When he lost to Oliver Cromwell, he was executed. The monarchy was abolished and a constitutional republic established (democracy).

Oliver Cromwell (1653-1658): Became Lord Protector, a virtual dictator. He was a Puritan, but tolerant towards Protestants. A very controversial figure. After he died, a coup brought Charles II to power.

Charles II (1660-1685): Son of Charles I.  Known as Merry Monarch, had 12 kids out of wedlock. He favoured religious tolerance. He dissolved the English parliament and ruled alone until his death.

James II (1685-1688): He was Catholic, and is known for struggles over religious tolerance. He considered himself all-powerful over Parliament, which eventually led to his deposition. He went into exile.

William of Orange (and Mary) (1689-1672): The Glorious Revolution. He was a staunch Protestant and was asked to take over the monarchy.