The bottom line is that the short term direction of the US equities isn’t clear. Monday (which may stretch into Tuesday) should provide the guidance as to what the market has in store. The two main options for Monday point in opposite directions. My preferred count has another small bounce before we head down in earnest. The support for this statement is in the ES (futures) chart, which shows up several charts below. The longer term direction is down.

Tuesday Update: We are now into the projected bounce—a second wave, except for the Nasdaq (which looks like it will go a fourth wave, as of this morning) and the DOW.

Let’s look at the charts (from Sunday night): 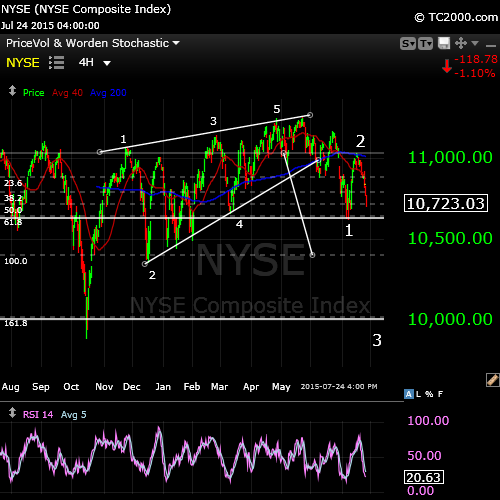 For the bigger picture, I revert back to the NYSE (above). As I’ve stated before this “mother of all exchanges” is where I look first to get a sense of overall direction. On this 4 hour chart, we’re showing the ending diagonal (with a double top), a first wave down, second wave retrace, and a move down to begin the third wave. I’m also showing the fibonacci extension to suggest a target for the third wave at 1.618 times the length of wave 1. Although the trend down isn’t confirmed yet, everything points to a very bearish result. 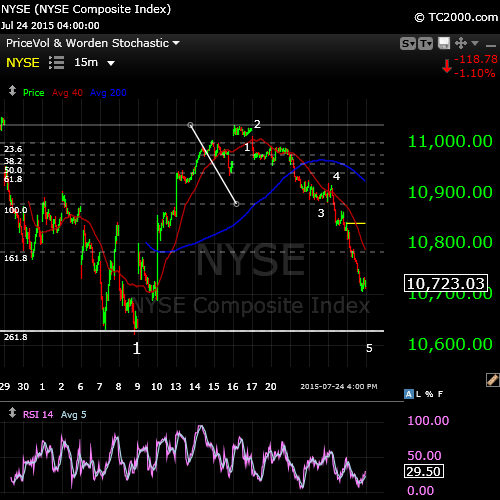 Above is a zoomed in 15 minute chart of the NYSE, showing the sub-wave structure. The NYSE could be setting up for a bounce (as it looks like we’re finishing a smaller degree 5 waves down—as per the labelling). The key level for the NYSE is $10,622,32. If it breaks this low, it should keep going. The next chart is the one that points more definitively to a small bounce. 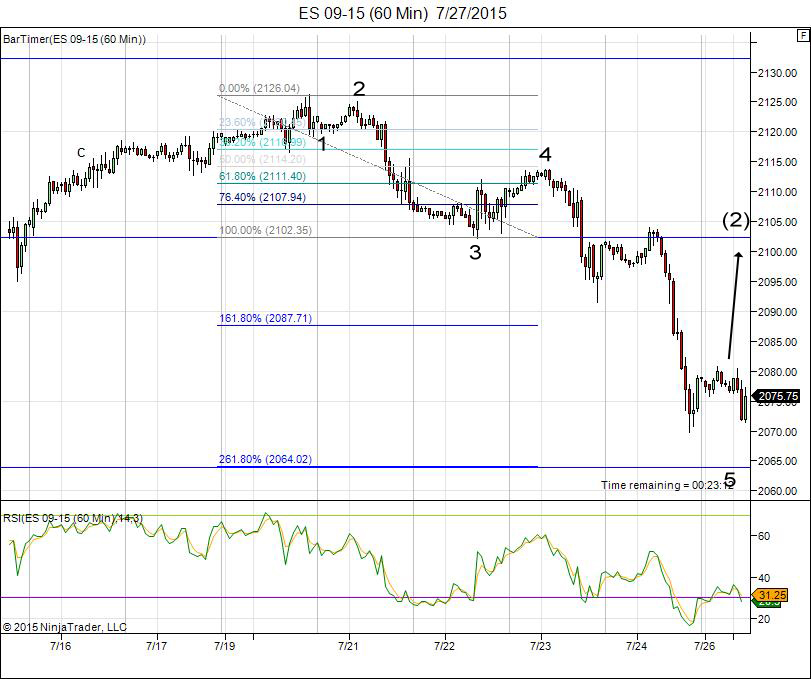 I trade the e-mini futures. The futures mirror the major US indices, but run around the clock (24 hours) from Sunday through Friday. They very often give a full picture of what’s happening “under the hood.” Here’s a look at the ES (em-mini futures for the SP500)—above. It appears to be completing 5 waves down and if so, a bounce is imminent.

The look of the wave is correct (as a motive wave) and the length is also correct (for a first wave) I do not expect the bounce to rise about the 62% retrace level (labeled as (2))before turning around and heading down. This morning, as I’m completing this post, we’re following through as expected (appear to be finishing a small 5th wave). 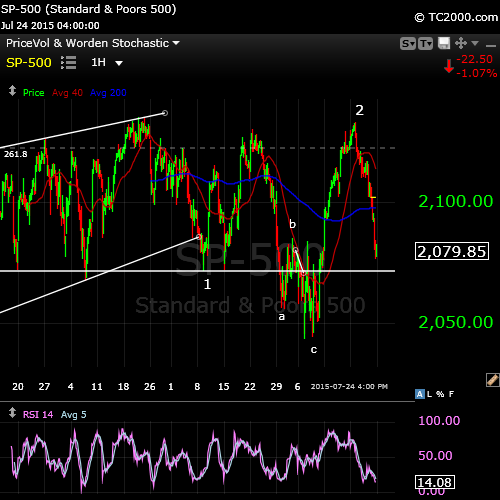 The SP500 above has a similar look if we were to drill down to the subwaves. The bigger picture is that the SP500 did not go to a new high last week (as projected here) and has set up as a second wave (which puts it in sync with the NYSE). The DOW is in a similar position. The key bearish break for the SP500 is $2044.42. If we break this level, we’ll likely head down immediately to complete the larger wave 3.

Here is a cycles analysis of SPY (Sp500) as at today’s date. We’re in a decidedly bearish cycle until the early part of August. The cycle analysis I run using very sophisticated software using 13 years of data (in this case) and back tests cycles for both the highest percentage of trade wins and the highest net profit (from trading both cycles lows and highs). This analysis is a result of the top 6 cycles synthesized into the single wave shown. 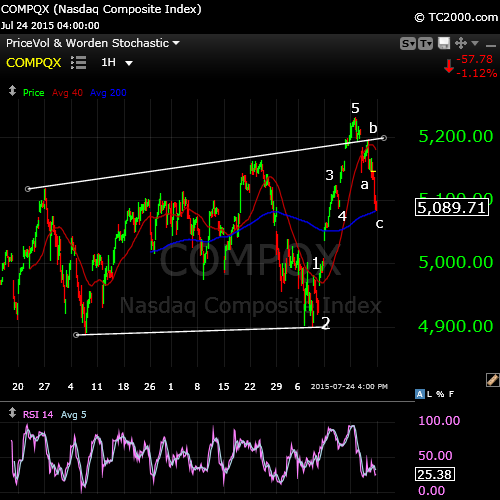 Finally, the Nasdaq chart above shows a 5 wave up ending wave and then an abc wave down. The abc wave suggests it will completely retrace back to to test the top (unless we head down further Monday to complete five waves). Supporting the idea of a retrace is the expectation for a double top at such an important top. This would line up with a bounce for the other indices.

Tuesday Update: The Nasdaq hit a new low this morning and my preferred count puts it in the first leg of the first wave, with a fourth wave bounce coming. No new high. 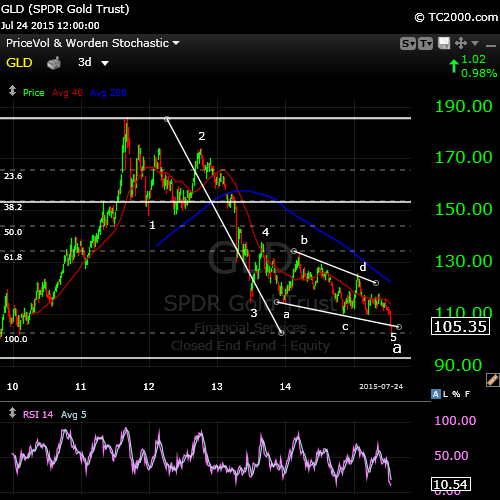 I got asked about gold this week. Above is the gold ETF (GLD) showing an ending diagonal to complete the a wave of the sequence. We should head up in the near future. We expect from here to complete a second (or b) wave, which should rise near the 62% level (around the $150 mark) before heading down in a third (or c) wave to the conclusion of this bearish pattern (obviously months into the future).

Above is a cycles analysis of GLD, using similar parameters as those used for the SPY analysis. Here we’re showing a bullish cycle which support the expectation for a rise in GLD.