I hope nobody was thinking this was going to be easy! Cause it’s definitely not. This is about as muddy as markets get from an Elliott Wave perspective. Even cycles aren’t giving me a clear indication of where we’re going, other than the short term (tomorrow—Friday, July 24).

Short term, we’re going up. This is the last wave. How far we’re going up is the question. It’s a broken market, with various US indices in various stages of completion. So I’ll take you through each index and tell you what I see. I also ran a cycles analysis twice on SPY (SP500) and I’ll share the results with you, as well. 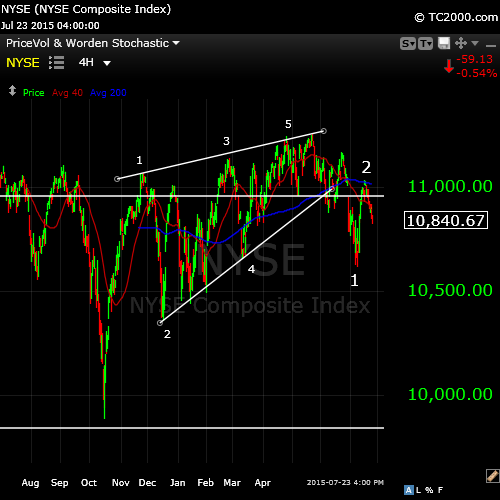 Here’s the NYSE (above)—what I always look at first, due to its size. On the four hour chart, I’m counting the cleanest ending diagonal of all the US indices (that look like they’re either completing one or already have). The last wave of the diagonal pattern is even sporting a double top. An ending diagonal consists of five waves, each wave in a three wave (abc) pattern. An ending diagonal is a final wave and so we should be in a downtrend if this count is correct. 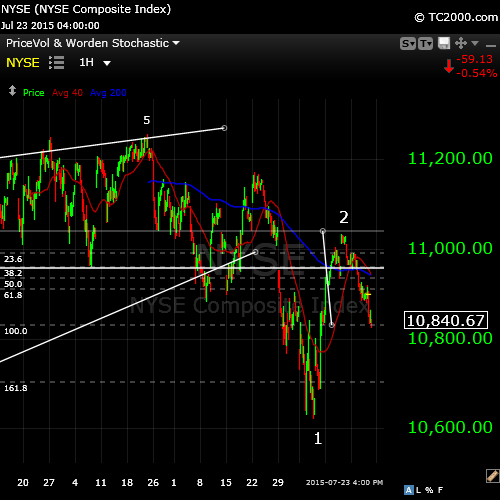 Zooming in using a one hour NYSE chart (above), you can see the most recent wave down (the start of the the third wave by my count). This wave down seems to be in five waves. If this is correct, we should retrace up only to the horizontal line (62%), which means the other indices will be somewhat limited in their ability to rise above the most recent high. If we go above that horizontal line by any great amount, this count is wrong and we could see a bit of a “blow-off” from the other indices. 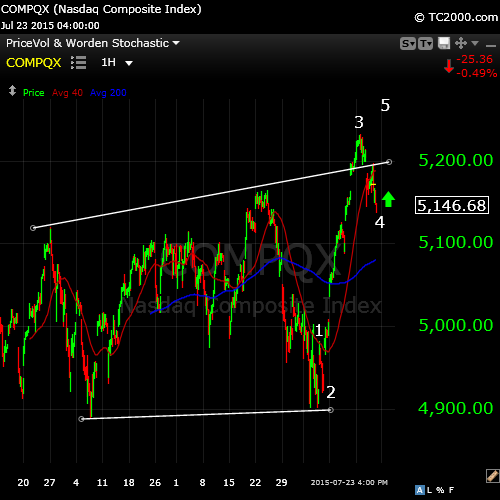 The Nasdaq is in the lead! There’s no question where it’s going. If this was the final wave of an ending diagonal, it would be in three waves. However, as I’ve said from the start of the wave, it appears to be going up in five waves, so it’s simply a fifth and final wave up. The most recent wave down is definitely in three waves and must be retraced. The final wave of a wave 5 pattern is typically is 1.6 times the length of the first wave. However, the third wave is an odd length and this brings into question the lengths of the other waves in this pattern. So the market is not giving us much to go on in terms of what’s in store. 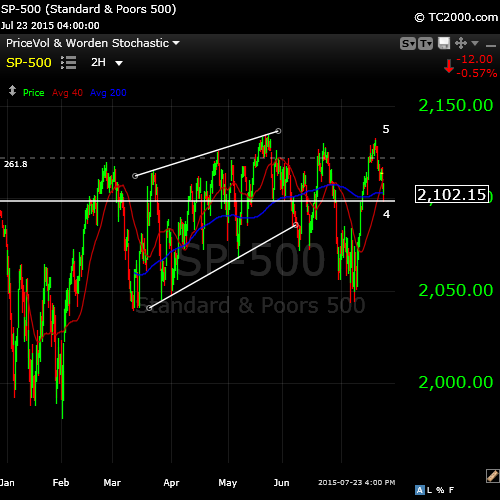 The SP500 is similar to the Nasdaq in that this final wave is up in five waves (an ending fifth wave). The most recent wave down dropped exactly 38% which suggests that it’s a fourth wave. This means we should head up tomorrow (Friday) in a fifth of fifth wave to a top. 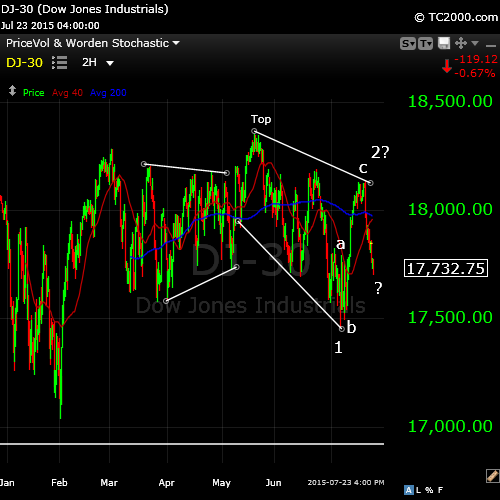 The DOW is the weakest of the major US indices and isn’t providing much of a clue as to how high it’s going, either. The most recent wave retraced down 62% Thursday and looks like it came down in 3 waves. That suggests we’re going back up to the top. What usually happens when the US indices top is that they all go up to a new high together so that they’re in sync when they turn down. However, the strength of the DOW isn’t as great as the others and so I question whether it can make it to a new high. Tomorrow is going to be an interesting day (which may carry over into next week).

This is the first of two cycles I analysis I ran. I’m using data going back to 2002 for both. The software finds all the cycles inherent in this asset and then I typically order the resulting cycles by the highest number of trade wins or the highest percentage ROI over the entire period. Cycles repeat and so the past is a good indication of the future. This chart combines all the cycles found to provide a compilation wave. You can see how close-fitting it has been in the past. The summer, with its extremely low volume is not fitting as well.

This first chart uses all of the cycles found to project the cycle path forward. What concerns me is that we’re losing the window for this projected down cycle and it shown heading up at the beginning of August.

In any event, you see the dramatic drop starting in early October. The question is whether this summer cycle is strong enough to create a first wave down over the next couple of weeks.

The second cycle I ran is the same as the first from a data set perspective. The only difference is that I used only the top 8 cycles (by percentage wins) to result in a compilation wave. Choosing only the top cycles historically for this asset should provide a better forecast. The result is a forecast drop into September and then a rise into October. This down cycle is weak and therefore the probability is less than the following cycle, which shows a very dramatic drop starting in October. At least in that projection, there’s some consistency!