I see so many comments out there on the internet that are focused on the near term outlook of one index or another, with projections into the stratosphere. Of course, a trader has to keep his or her eye on the bigger picture and trade in the direction of the trend. So, today, I’m going to start with some “bigger picture” charts, based on my Elliott wave count (as well as a dose of logic), and then drill down to what I expect this coming week.

The Weight of the NYSE
It’s important to keep in mind the size and relationship of the exchanges versus the indices like the DOW and SP500. I rely heavily on the wave count of the NYSE because it’s the largest exchange in the world by market capitalization—by far. It’s “where the money is.”

The DOW and SP500 are subsets of these two exchanges. While the Nasdaq (3100 stocks) and NYSE (1800 stocks) total about 5,000 stocks, the DOW by comparison has 30 and the SP500 has, of course, 500. So the NYSE is the elephant in the room in terms of money. As a result, I look to it first to determine where the overall the market is headed (this is the logic part of my argument). 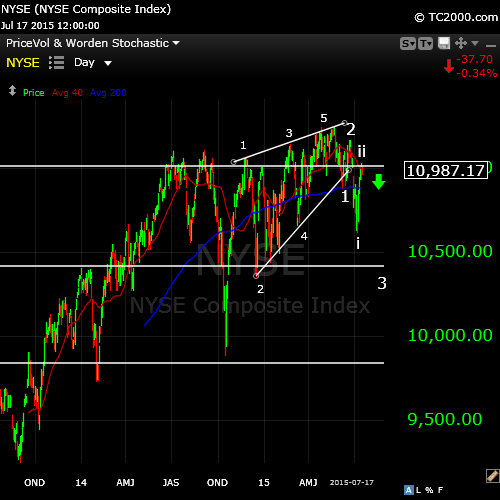 I’ve maintained (since it happened) that the NYSE topped on May 20, based on the EW count and the long cycle wave. You can find it here. It’s the fourth chart down—long wave of the DOW. The NYSE above sports a clear ending diagonal of 5 waves, all of them in 3’s, which is the textbook pattern for an ending diagonal.

My count (above) shows us sitting atop the second wave ready to descend into a third. Note that while the animal spirits were alive and well in the lesser indices on Friday, the NYSE sat at a 62% retrace level. Cycle and cosmic energy waves have turned decidedly negative over this weekend and so I would expect the NYSE and other indices to turn down now. 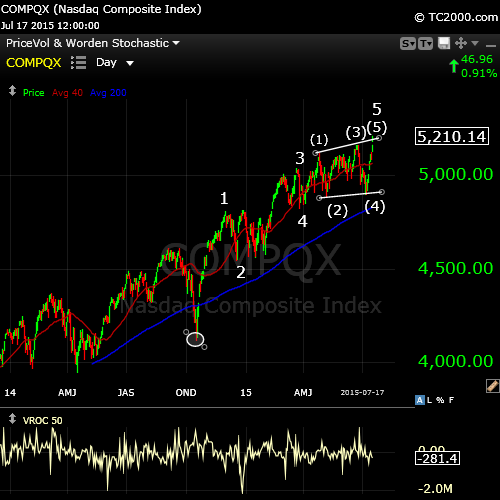 The Nasdaq exchange is the higher beta exchange, much more volatile. Friday’s wave up has completed either an ending diagonal or an ending triangle, or will with about another 10 points of rise. Either of these patterns is an ending pattern. Note the volume rate of change indicator below the chart. It turned decidedly negative for the final fifth wave up, telling us the volume was extremely thin, which is typical of a final wave up. 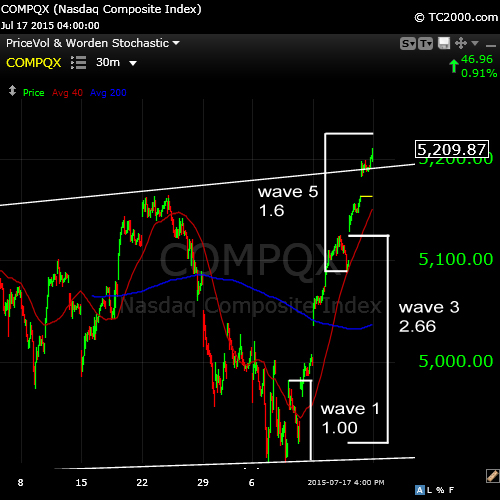 Zooming in to the final wave of the Nasdaq, I see what looks like five waves up, although the fourth wave is not very deep. Be that as it may, the lengths of the waves are textbook, suggesting that it’s a final 5th wave up (rather than 3 waves). If so, we’re shy about 10 points, which we may get in conjunction with a small opening gap reversal on Monday morning. 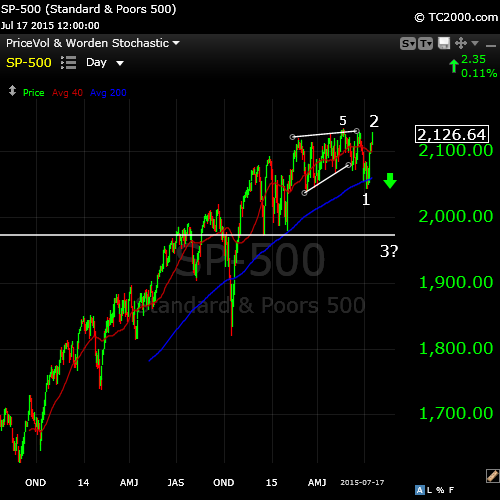 The SP500 has not gone to a new high. I suggested last week that it likely would not. That’s because the final wave up is still in three waves. As an ending wave of the sequence, it would have to be in 5 waves (an Elliott wave rule). It could still happen, but the patterns of the other indices lead me to believe it won’t. In order to complete a wave of 5 waves, we would have to turn bearish to the previous fourth wave and then head up to a new high in a fifth of fifth wave. As cycles are turning very bearish now, I’m anticipating an immediate turn down into a third wave. 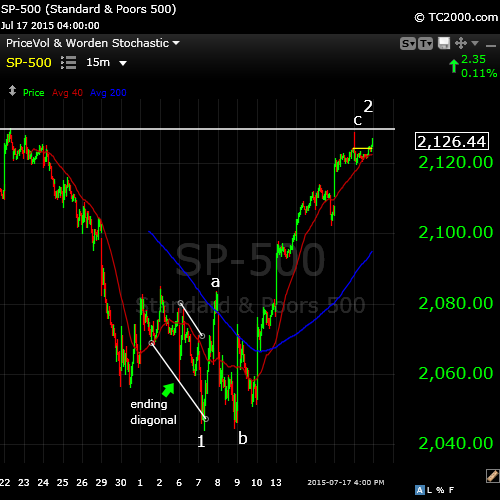 A close look at the underlying wave structure of the SP500 shows the three wave sequence up. A fourth wave would mean a downturn to about the $2100 area before a turn up to a final high. A drop below this level would be a good indication a third wave down was underway. 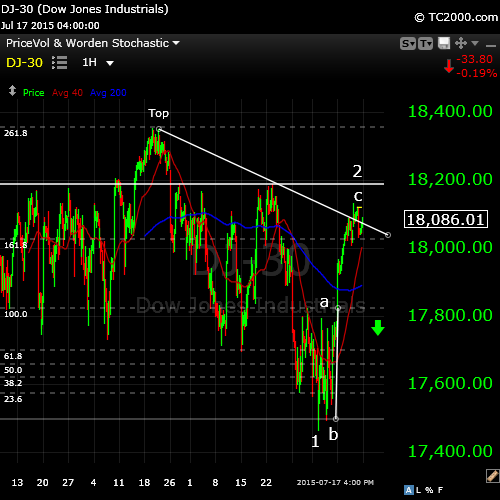 The DOW is a bit weaker than the other indices but has a somewhat similar structure to the SP500. It’s sporting a very clear 3 wave structure in the most recent up wave. I am leaning towards a drop into a third wave. 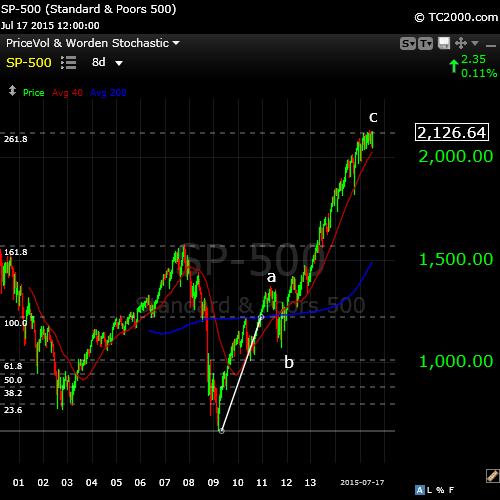 Zooming way out to an 8 day chart of the SP500, it’s important to note the lengths of the waves. Firstly, it’s a clear a/b/c pattern, which means it must retrace the length of the wave. Secondly, the fibonacci extension from the first wave (a typical countertrend wave relationship) is a multiple of phi (2.618). This would be a high probability area for a major turn down.

If I were to add in cycle indicators (like the RSI and others), just about everything is giving a decidedly bearish outlook. That’s my story and I’m sticking with it. Not much has changed since my forecasts of the past couple of weeks.