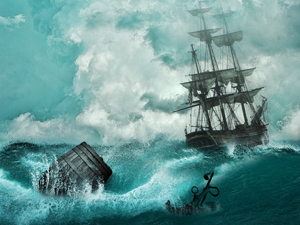 I’m a sailor and, because of that, am very aware of the power of Mother Nature. She’s part of everything that happens on Earth, more than most people know. We’re going to see her work over the next couple of weeks as we go through a solar eclipse and then solstice.

With the Texas Supreme Court challenge having been thrown out on Friday night, the big game in town on Monday seems to be the solar eclipse. That doesn’t mean the fight for freedom isn’t going to play out over the next two months; it will in fact be an entry into the history books. The US is in a cyber warfare situation, something I’m going to cover extensively later today on my site, thetruthsage.com.

On Monday (Dec. 14), the total solar eclipse of 2020 will sweep across South America’s Southern Cone, through Chile and Argentina, turning daytime into twilight for up to 2 minutes and 10 seconds.

We’re poised this weekend to complete a small B wave correction to the upside (on an hourly chart) in futures, after an A wave down over the past two days. It’s likely the C wave down will take the rest of this coming week to play out.

There are lots of other events coming up this week which could be market movers.

We’re starting to get quite close to the end of this corrective rally. I’ve slightly re-worked the chart of NYSE below to change the ending diagonal to an ending expanding diagonal.  You can see how close we are to a final top.

As I’ve been saying for the last couple of weeks, I’m expecting one more wave down and then one more wave up and that will end the trend. This week should give us the wave down; I’d expect the wave up to last into January, but that should be it. 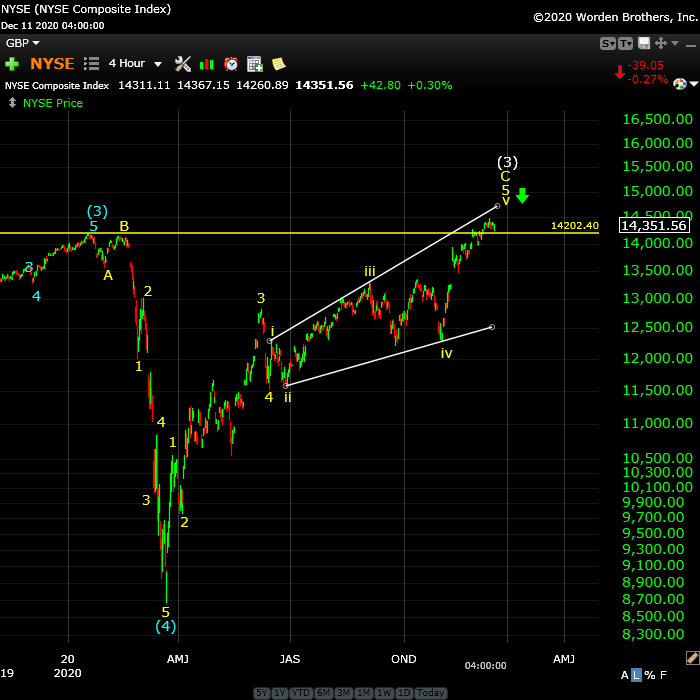 Above is 4 hour chart of NYSE showing us a very large ending diagonal. In fact, there are two of them!

I’ve made a slight change to the count here — changing the ending diagonal to an ending expanding diagonal. These are the rarest of patterns, but they happen to be all over the place at the moment. We just completed one in the hourly chart of ES (SPX eminis).

In the above chart, you’re seeing the entire wave up from March which has traced out an ending pattern, a large ending expanding diagonal at the top. When the entire pattern is complete, the trend will change to the downside. It looks like it requires a fourth and fifth wave to test the upper trendline before a final turn, a few weeks away.

There are no real rules within ending diagonals, other than the subwaves are zigzags, which are corrective three-wave patterns. Fibonacci measurements don’t necessarily work, so it’s impossible to know how long the waves will be. The fifth wave (that we’re currently in) needs to at reach the upper trendline, or get very close. That puts a cap on the market. 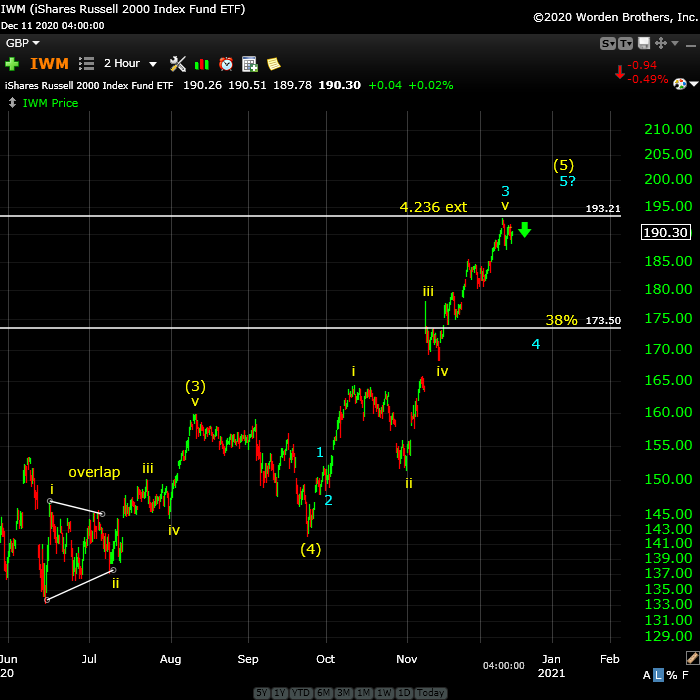 There are two possible counts for this index. I’ve discarded the ending diagonal, which makes this index the only one of the NYSE indices that isn’t in a diagonal of some sort. Based upon the wave lengths and expected waves down in other indices, the ending diagonal went to the low probability count.

I can still count the current subwave structure in two ways. The difference is rather subtle. In the short term, it doesn’t make any difference to the overall outcome.

Currently, I put us at the top of the third wave and expecting a fourth wave down to an area around the 38% retrace level shown on the chart.

The turn to the downside has already begun. It’s likely it will last most of the coming week.

These patterns are exceptionally rare (and it's not a good idea to call them early for that reason), but they're all over this market at the moment.

We're currently sitting with an A wave to the downside complete and a B wave in its final stages this weekend. I would expect the C wave down to take most of the rest of the coming week.

After the C wave is complete, we'll be in the final leg of this fifth wave of the ending expanding diagonal, with the upper trendline (or close to it) as the ultimate target.

NQ is in an ending diagonal and appears to have begun a bearish fourth wave, which should also take most of the week to complete. Then, it's up in a final fifth wave.

Summary: The ending diagonal pattern is playing out. We're in the final fifth wave, having completed the A wave and turning down into a B wave.

The SP500 also appears to be in an ending expanding diagonal.  Most other US market indices have similar patterns. Diagonals are ending patterns and warn of an impending, dramatic trend change after they're complete. This puts us in the final stages of this rally up from March of this year.