Options at the Top

The Spiked Top in the US Indices

All major markets are continuing as one. We’re at a top but the process of changing trend doesn’t happen overnight. The spiked top is the example—tops like this usually don’t last. Trends don’t “change on a dime.”

The waves down are corrective—they don’t look motive. Some reasons why:

There are more reasons, but this is a pretty persuasive list already. We need to expect a final new high. In the meantime, we are going to head to a new low.

Options for the US Dollar

Last week, I pointed out the fact that the US dollar had completed a small 4th wave up and was ready to turn back down in a 5th wave. That’s happened … but, we’re not  done yet. 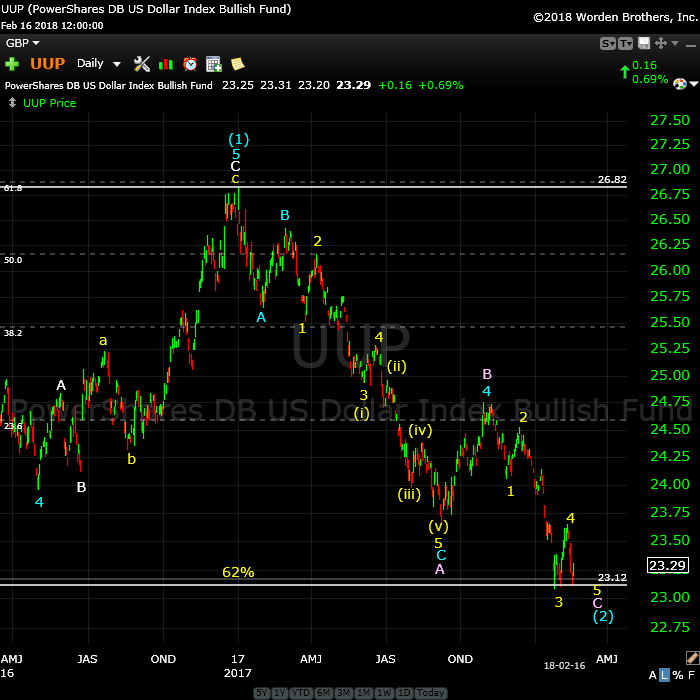 The waves in both directions are in threes. But since EURUSD went to a new high, a triangle there isn’t an option. However, an ending diagonal is. Both the euro and the dollar seem to be setting up for a possible ending diagonal.

It’s very early in the process, so this is speculative at the moment, but this solution seems to me to be the most probable. In that case, we have some time to go before we reach a slight new high in the US market (a new low in the the US Dollar). 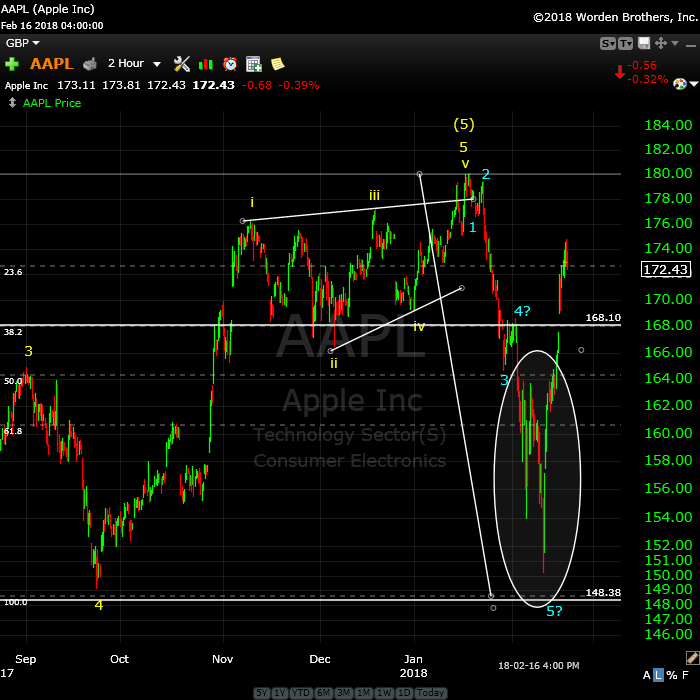 Last weekend, I showed this chart of AAPL and suggested it might be a fourth wave, certainly if it didn’t reach and exceed the previous fourth (which is always a key test of a first wave down).

During the week, it became obvious that we weren’t going to get there as the wave became obviously corrective. You can see the overlapping waves in the circle on the chart. That meant we were headed for a new high. However, this wave down is a fourth wave and the new high will be the last one.

A Change in Direction for Bonds 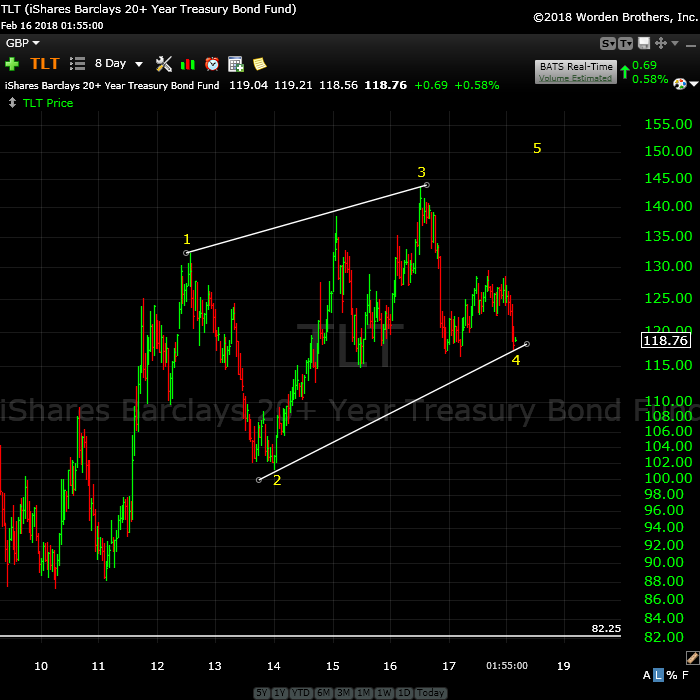 Above is the 8 day chart of the 20 day US treasury bond fund (TLT). If you’ve been in the Chart Show recently, you know I’ve expressed concerns about the structure of the most recent waves down from about 130.00—they appear to be corrective.

When I also look at the 10 year yield chart (below), it became obvious that we’re about to turn.

In the chart above, it looks like the ending diagonal has just completed a fourth wave down, rather than being complete. This is a much better looking configuration for an ending diagonal than what I’d originally shown. 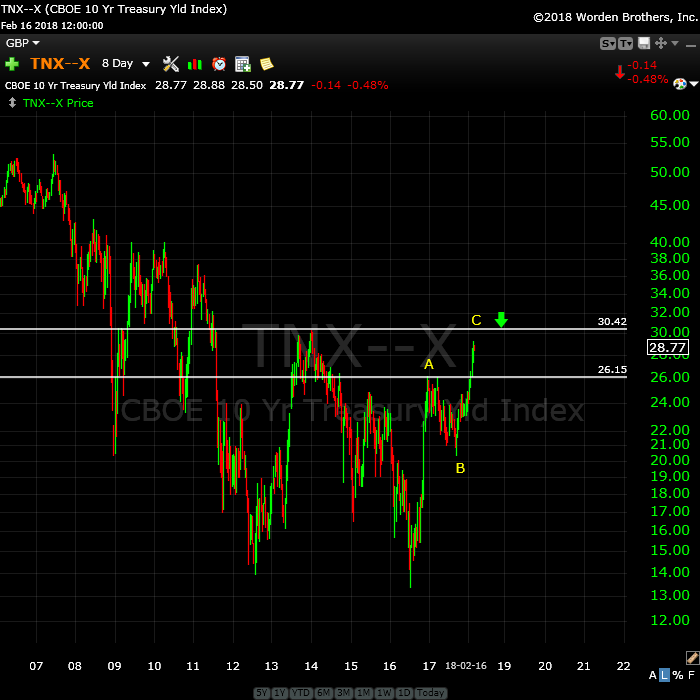 Above is the 8 day chart of the 10 year treasury yield (TNX). I’ve been following this for the past few weeks and have projected a turn at the 30.42 level. We’re almost there. (yield charts move in the opposite direction from bond fund charts).

Taking both these bond charts into account, it looks to me like we’re about ready for a turn down in yield and, at the same time, a turn up in the fund.

Look for a turn down in TNX, with an eventual drop to a new low.

There are also options for the US market. My analysis tells me that we're in a fourth wave with more downside before we turn up in a final fifth wave to the top. It looks to me as though this last wave will make a slight new top to the 2900 area, if we meet one of the downside targets identified.

I'm expecting the downside target to a new low, which could be a previous fourth wave area (labelling may not be correct on the wave up to the current top). There are other measured options for a bottom, but the levels shown in the chart seem the most probable.

Volume: It remains high, as expected.

Summary: We've turned down across the US indices, but this appears to be a fourth wave down with a C wave still to go. We'll look for a turn there and a final rally to a new high.

Previous Post: The Big Top Fake-Out Next Post:Locking in the Combination (or not)
[Content protected for Traders Gold6, Traders Gold3, Traders Gold, Traders Trial members only]