I think the signs are there that I’ve been doing this way too long, having been slammed earlier this week for being able to count waves and taking a stand when nobody else seems to be able to (in my small sphere of influence, at any rate) .. sigh. But, here we go again!

Let me state emphatically that I’m am NOT suggesting in any way that you follow what I’m doing or that you trade the market. This is my technical analysis and the way I’m looking at what’s happening now … again, from a purely technical perspective. I’ll also explore some external factors below (after the technical). 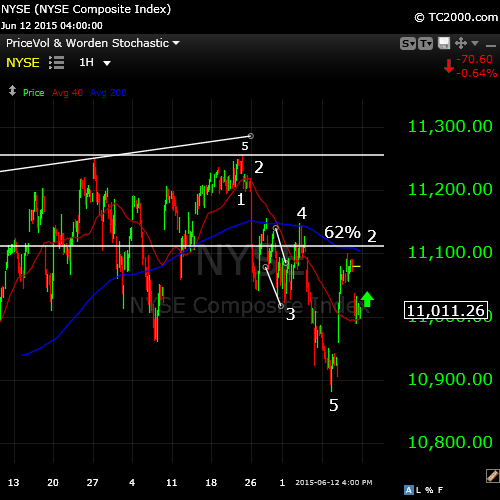 Above is the NYSE. I like to concentrate on it as it usually has the cleanest waves and it’s the largest cap index in the world, so it’s the gorilla in the room. Everything else is likely going to follow it (Nasdaq, DOW, SP500) and, in fact, they are. I called the top on May 20 and the first wave down. My decision on the top came from cycles analysis (below), which told us that it was likely to happen around May 15, 2015 (the Elliottwave structure simply confirmed it).

The chart above shows the first wave down (actually a combination of two larger waves down, so there are a couple of ways to label this). I have identified an intermediate ending diagonal (with a couple of slightly converging diagonal lines). Overall, it has the typical look of a first wave down and follows all the Elliott Wave rules, including the correct fibonacci ratios.

The second wave has retraced 62% (which is what a second wave does) and, despite a majority of charts I’ve seen posted (including Elliottwave International), it is a corrective wave, which means we’re going down. It is NOT impulsive.

OK, so let’s zoom in and see why it’s a corrective wave: 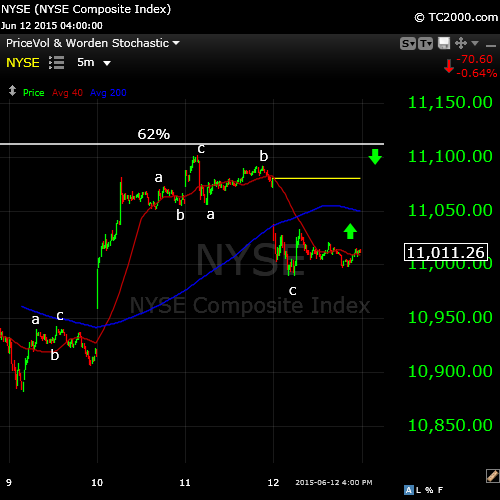 The second wave up is actually a double zig zag. I have labelled the sub-waves which are all in 3’s. (It makes me crazy when I see all these supposed credentialed analysts unwilling to take a critical look at subwaves, simply by zooming in!).

So, let’s review the Elliott wave rules for impulsive waves (from the Elliott Wave Principle):

This wave does not conform to points 2 and 4. So, clearly, wave two is a corrective wave. Period. You can see 5 waves, so it’s complete. It has to retrace.

The next wave down (on Friday) was also a three and so, it has to retrace, unless it heads lower immediately. I doubt that’s going to happen, because if you look at the chart, wave two has not quite reached the 62% retrace line. In my rather extended time with Elliottwave, I have rarely seen a second wave not make the 62% retrace line.

The bottom line is that I expect a retrace to 62% and then an immediate turn to head down into a third wave, which should extend at least 1.618 times the length of the first wave down. That’s how I’m playing the the current wave patterns.

Let’s look at the long term cycles analysis, compliments of the Foundation for the Study of Cycles: 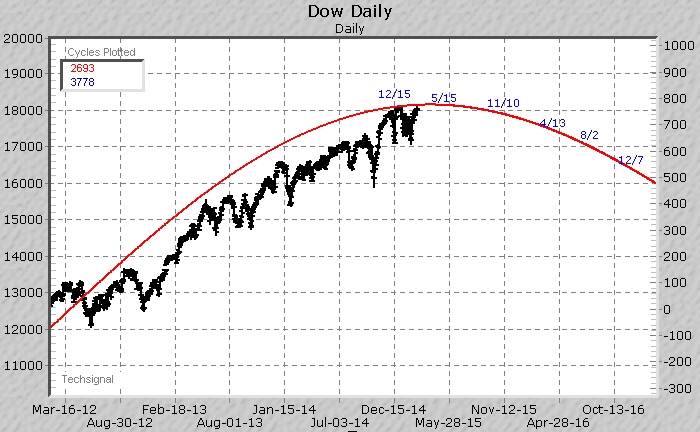 This is a long-term DOW chart. This analysis was done in early 2012. We’ve brought the chart up to date by showing the DOW approaching the wave top. The top was projected to be about May 15, 2015. The ability to do this comes from Edward R. Dewey’s original algorithms that we have incorporated into ground-breaking software that allows us to run cycles analysis on an market asset on any index anywhere in the world. You can see a video on the software at TechSignal.com.

If you’re new to cycles, here’s a quote from Lee Iacocca, past president and CEO of Chrysler, from 1978-92:

The Foundation for the Study of Cycles is also the leader of planetary analysis of markets and events around the world. It’s been known for decades that markets are at least indirectly influenced by the movement of the universe (in fact, everything that happens on Earth is, and that’s the foundation for the information presented on this site).The most recent and ongoing analysis that we review twice a week shows the projection of the SP500 over the short term. 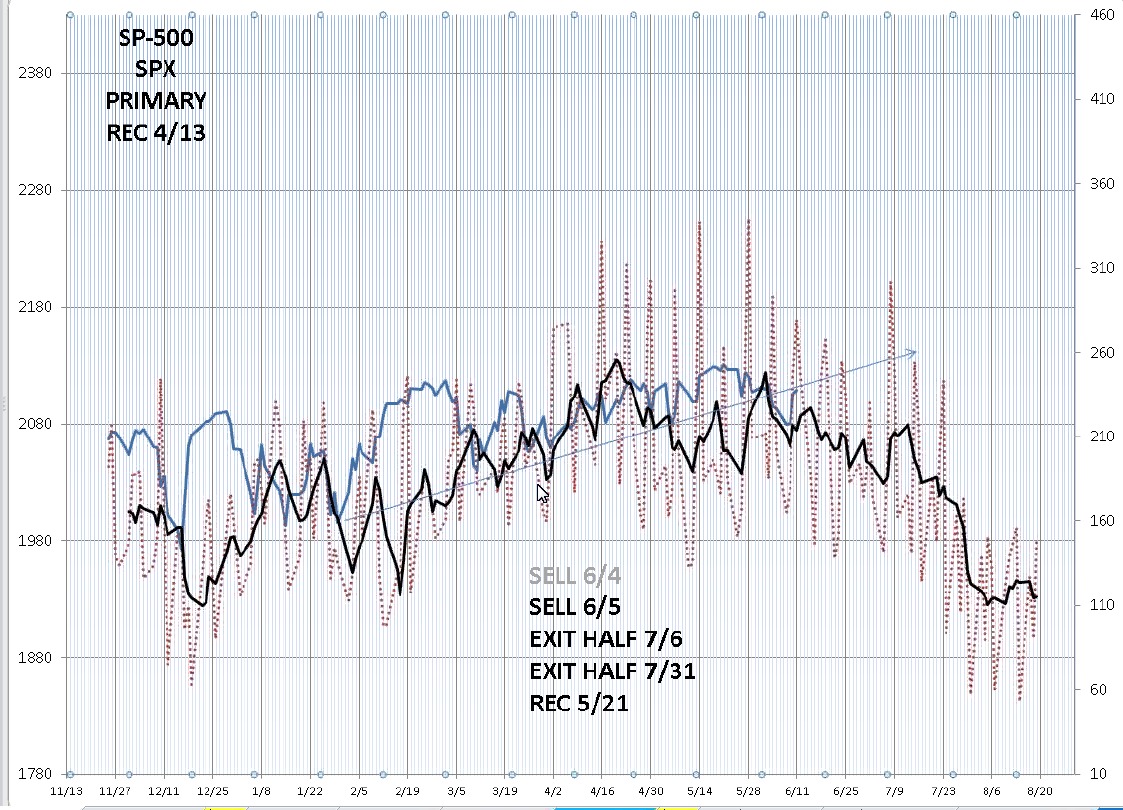 In the chart above, the red lines are the planetary signals, based upon Edward Dewey’s original algorithms. Only the Foundation for the Study of Cycles has the ability to produce this information and they’re the most advanced in the world in this technology.The black line is a five day moving average. The blue line is the actual price of the SP500 to this past Thursday, (June 11, 2015). If you’re interested in finding out more about the Foundation services (to be part of the weekly online analysis meetings, you can contact Julio Chavez).

All the analysis using these different data sources leads to the same conclusion and why I’m able to be so accurate on the movements of the market (so far …). Elliott waves provide price projections while cycles provide market direction and turns. It’s a powerful combination when used in tandem.

The bottom line is that we expect the US market to head lower now into the beginning of August before a major bounce (but not to a new high). Longer term, we’re projecting a larger set of waves down to begin in the September/October timeframe. If you sign up on my site (to the right), you’ll receive more information as we move forward into what is going to be the largest bursting of a market bubble in history.