Some Clarity is a Good Thing

Update Friday Before the Market Opens:  Based on what the futures did last night, we saw the top yesterday. We simply have to test the top this morning and then we’ll turn down into wave 5.

Clarity has finally returned to the wave count. 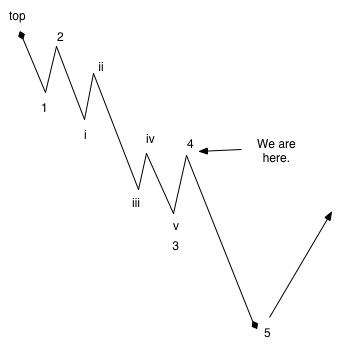 Over the past few sessions, it has been a difficult market to decipher. That’s because the third wave came down so quickly that the subwaves are really not clear. With today’s session, however, we got some clarity. We’re in the higher degree fourth wave, having completed the full third wave.

I’ve updated our position (on the chart on the left) at the top of the fourth wave (at least by tomorrow we should be there), with a final fifth wave down to  go.

The fifth wave down will be a big drop and it will unwind in five waves (the sub waves don’t appear on the chart). I’m going to refrain from giving targets for the drop, as the third wave was so long and didn’t really conform to the typical wave 3 length. Wave 5 is often as long as wave 3 and can be longer. I’ll try to alert you as to likely targets once we’ve seen a fair amount of the wave unfold.

During today’s session, what looked first to be a first wave down followed by a second wave morphed into a triangle, and finally, towards the latter part of the day, morphed again into what will most likely be either a flat or, as I look tonight, just a double zigzag ending in an ABC wave up. A flat is a 3-3-5 wave configuration: Three waves up, three waves down, and then 5 waves up to finish. 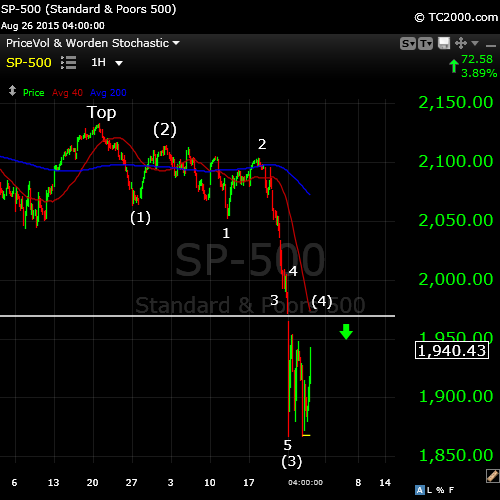 We’ll start with the SP500 (above). On all the index charts, I’ve drawn a horizontal line at the 38% retracement level, which is the minimum level for a fourth wave to retrace. The line in the SP500 falls right in the middle of a gap, so I would expect the gap to get filled. My target for the flat then in the SP500 is about $1972. Somewhere around that level, the market should roll-over and head to new lows.

If you’re following SPY, and appropriate target for the retrace is about $197.50. 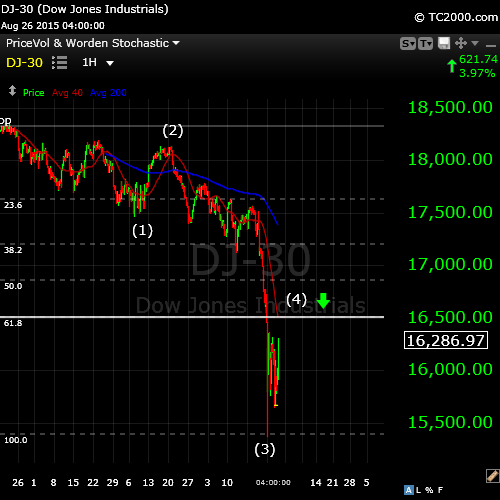 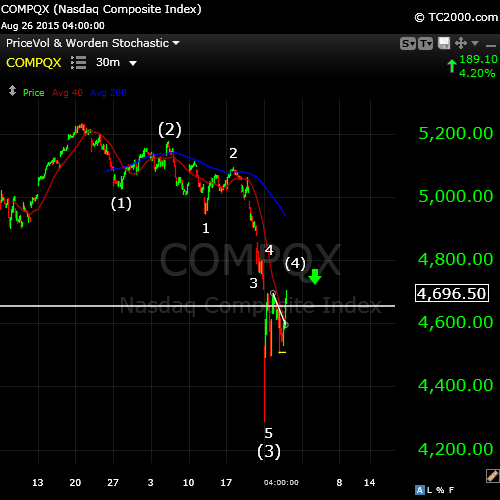 Here’s the Nasdaq (above).  It has a similar look to the other indices. The Nasdaq has already retraced past the 38% level. Its target might be the previous fourth wave at $4808. It doesn’t have to reach that point, however, and will roll over when the other indices do so.

I’ve run a cycle analysis on the SPY (SP500) tonight. The important thing to note here is that the negative cycle period is coming to an end. Once this fifth wave finishes, we’ll be into a very supportive period through to October. After we complete 5 waves down, we will go into a second wave retrace. The second wave will retrace at least 62% of the entire drop. However, it cannot go to a new high.

Once the second wave finishes, likely sometime in October, we roll-over once again and head down in a new set of 5 waves very much longer than the set we’re in the midst of completing. 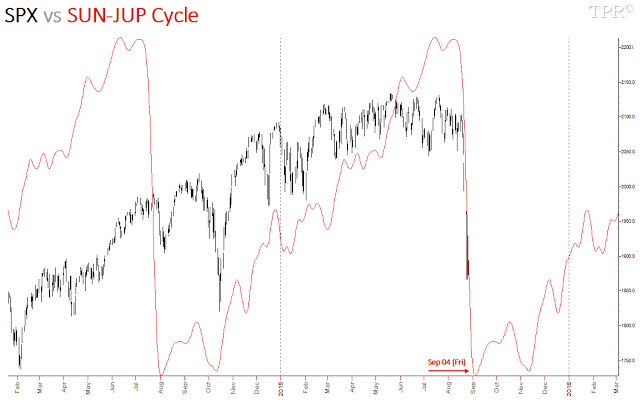 I found the above chart very compelling. This chart shows September 4 as the possible bottom of the next wave down, which seems to work with our Elliott Wave prognosis. Wave 5 will be dramatic and may take the DOW down another two thousand points. I would suspect the wave will take about a week, which would be similar to the third wave.