Above is the 15 minute chart of ES. This is an extremely strange configuration for wave 3 down, but I’m trusting it’s all there correctly, based on what NQ has done, (and AUSUSD), which is a bit more normal. Look for a 62% retrace to the 2361 area, which should be ripe for a short.

The big news in the past week was the bullish thrust from a triangle in ES and SPX. It’s almost complete.

This has been another long haul weekend involving a lot of measurements and re-labelling, based upon the move up last week.

It’s now clear to me that we have just a few points (about 5 max) to move above our current high in SPX/ES and this should trigger a turn down into wave 4.

Wave 4 can take any of a number of patterns (triangle, zigzags, flat, combination) and we’ll have to see how the first set of waves shapes up in order to get a target for the bottom. 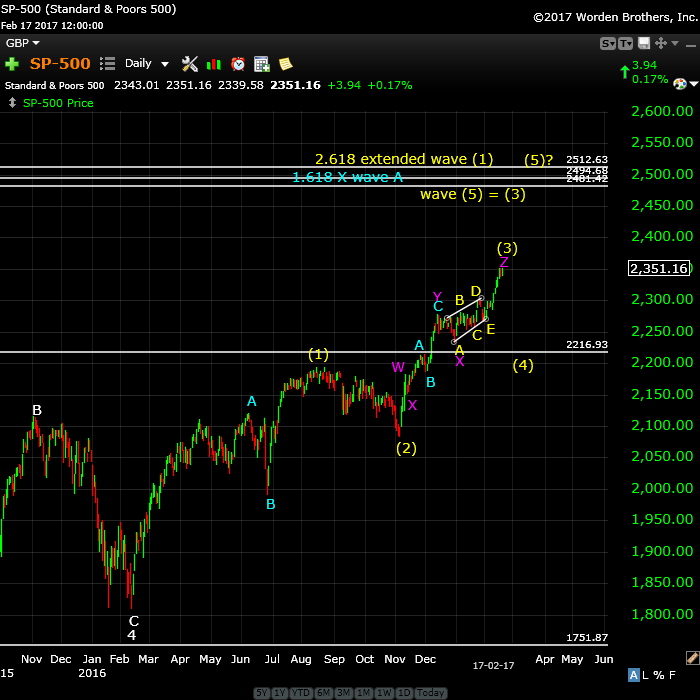 Above is the daily chart of SP500 shown in the video today. We are virtually done with the 3rd wave up, but may still have a couple of dollars more to go. Wave 3 is longer than wave 1 but not the 1.618 ratio we might expect and so the waves up are starting to compress.

The current state of the USD currency pairs (and the US dollar) are suggesting to me that wave 4 may be relatively short in time and in depth. It may not make it to the 2216  target I show on the screen.

As I explain in today’s video, the ultimate target for the larger wave (5) may be 2500.

I’m still projecting a final top to our five hundred year set of Supercycle waves sometime in the early part of this year. I’ve given up on being specific, as these waves have been moving very slowly. Ultimately, Mr. Elliott’s waves will forecast the end and give us adequate warning of the turn. 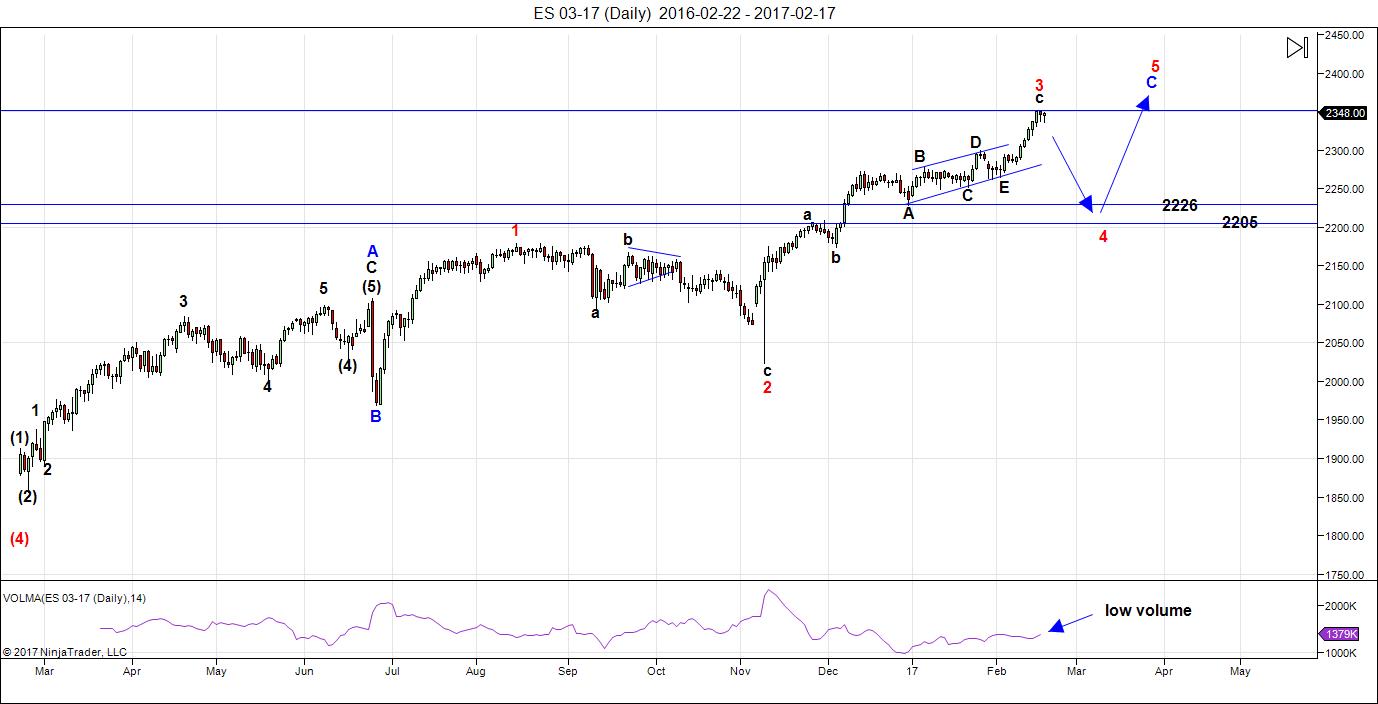 Summary: We’re at the top of wave 3 of the final 5 wave pattern, ready to turn down into four with one more very small wave up to a new high. There’s a major turn date predicted for Tuesday/Wednesday, February 23/24 with all major assets slated to turn this week. The larger wave (4) should come down in 3 waves.

Above is the 60 minute chart of ES showing our progress to the end of the day on Friday (click to enlarge). We’ve rallied to a new high, but we’re very near the end of larger wave (3).

The final wave up from blue E (last wave of the running triangle) is virtually complete, or will be, after one more small wave down (iv) and a fifth wave up (v). Measurements support a potential move up to 2355.

We have an Andy Pancholi turn date on Tuesday/Wednesdasy, so somewhere in this time frame, look for a turn.

Wave four will need to take at least a couple of weeks, I would think.

There is also one more eclipse in February, on the 26th.

New Free Blog Post: Another Win for Usury: The Battle of Waterloo

The Chart Show sign up is live for Thursday, February 23. You can sign up now in the usual spot: Webinars

Here’s a video overview of the market for Tuesday, February 21, 2017

Note: A little longer today. I spend some time going over the bigger picture on the SP500.

The Charts Going into Tuesday 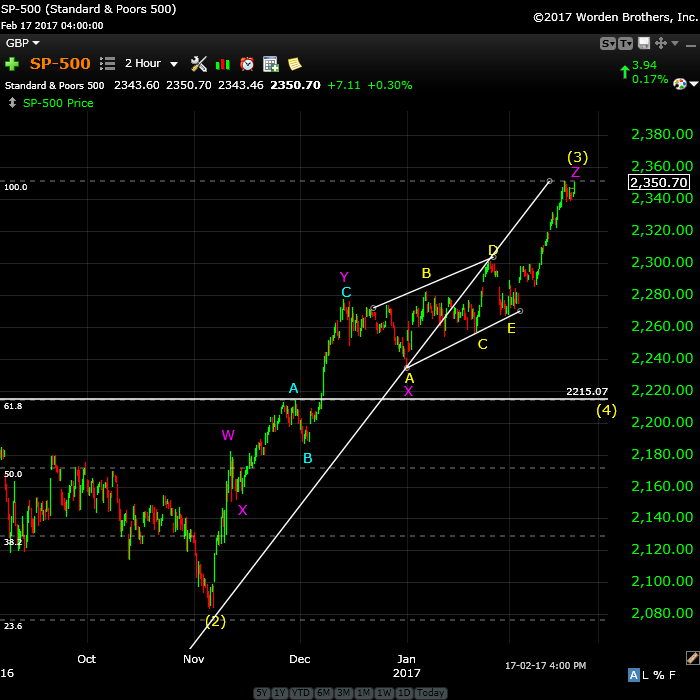 Above is the 2 hour chart of SP500 re-labelled to show the three sets of pattern in wave 3 (a triple three), which is a combination wave. The final pattern has been labelled as a rare running triangle.

I expect another small 5th of a 5th wave up to a slight new high to finish the third wave. 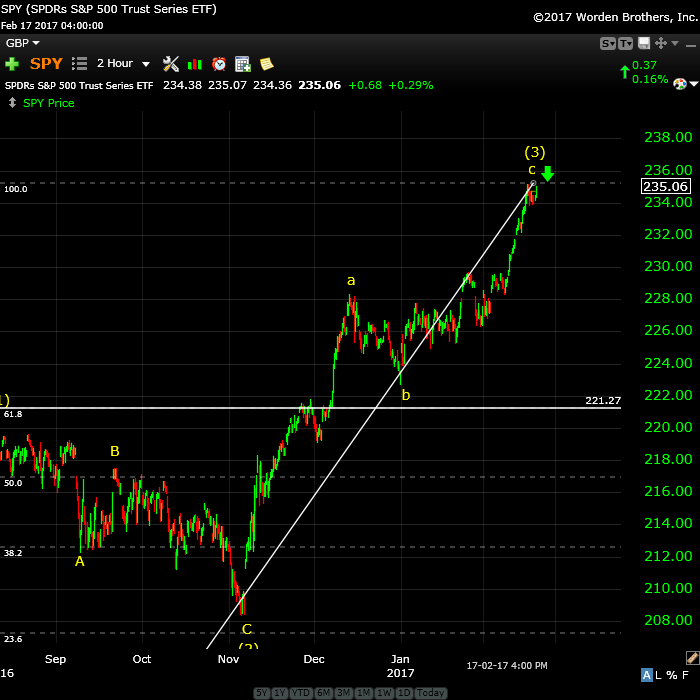 Above is the 2 hour chart of SPY showing a simple abc wave up. This labelling reinforces the idea that this wave up is corrective and has the same prognosis as the SP500 and ES. We’re at the top of wave 3 expecting a turn down within the next couple of days. 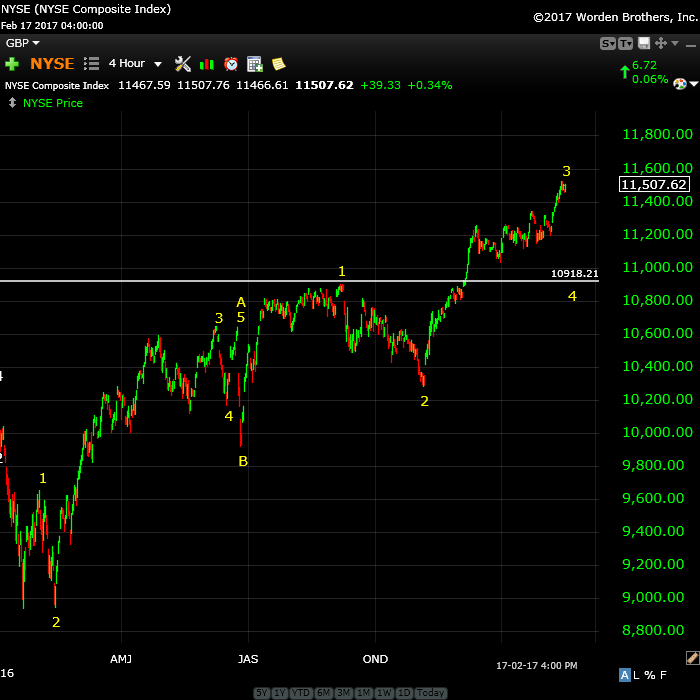 Above is the 4 hour chart of NYSE.

On a near term timeline, wave 3 is complete, or almost complete. The fourth wave down should parallel the configuration I’ve already mentioned for the other indices.

The 38% retrace level is at 10,918, which is just above the first wave area, so this index still has the potential to  trace out an ending diagonal—still to be seen. Wave (3) up also looks to be in three waves, so this is not an impulsive wave. Expect a turn down with the other indices in the first part of this week. 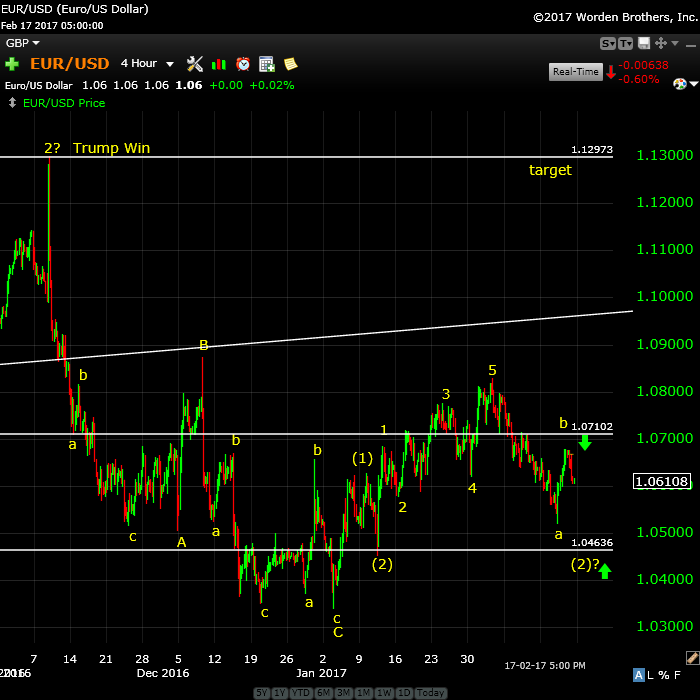 Above is the 4 hour chart of EURUSD. Here is the bigger picture for what I cover off in the video.

As I’ve been saying, EURUSD should continue down to a second wave (2) bottom at ~1.0464 (or a bit lower) before turning up into a third wave.

On a smaller scale (in the video) we seem to be completing wave b of the second wave. Wave b should still travel up to the horizontal line at 1.07102 before heading down to complete wave 2. 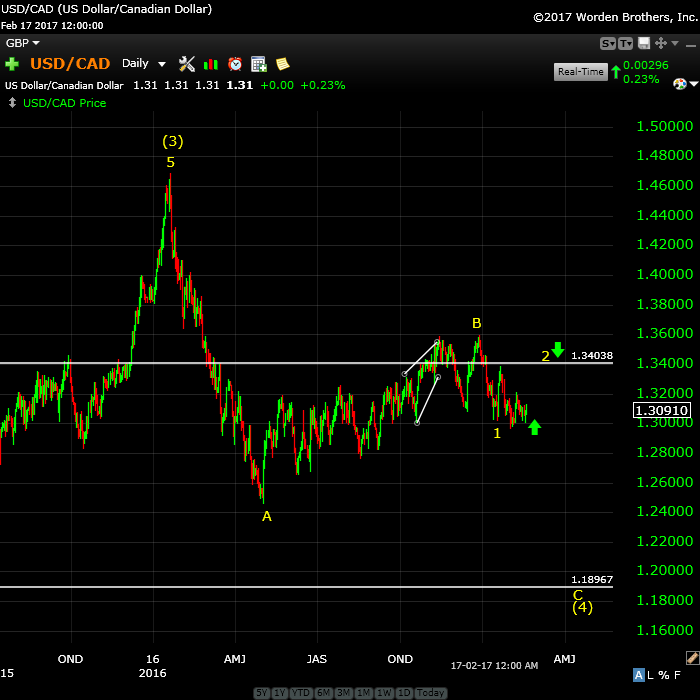 We’ve already hit my target of about 1.34 but I’ve been expecting a double wave (2) and we’ll slowly working our way to that end.  We’ve completed blue wave A and B (in the video) and I’m expecting a C wave up in three or five waves before we turn over and head much lower. This is the look at the bigger picture. The next larger move is to the downside with a target of about 1.19. 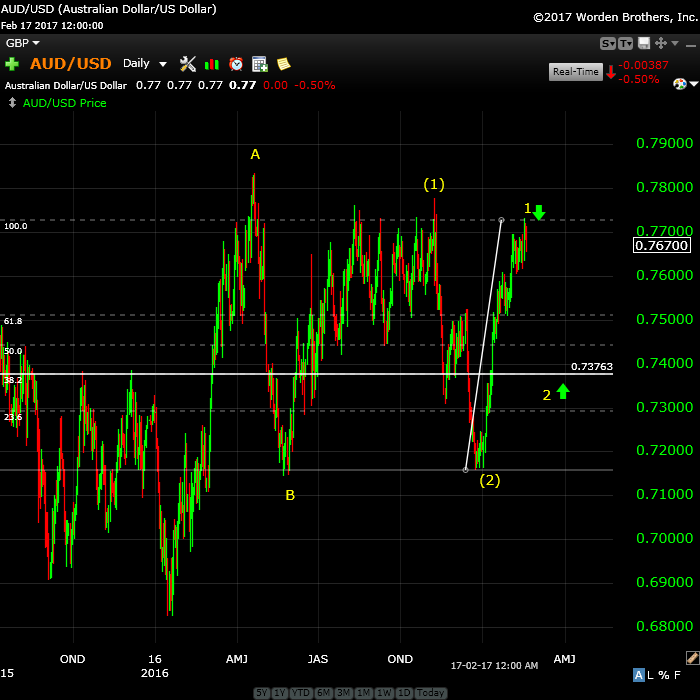 In the video, I show that we’re already in wave 2 (within the A wave down). We will move to the target in three waves to approx. .737 before turning up into the larger third wave. More information for the short term direction is in the video. 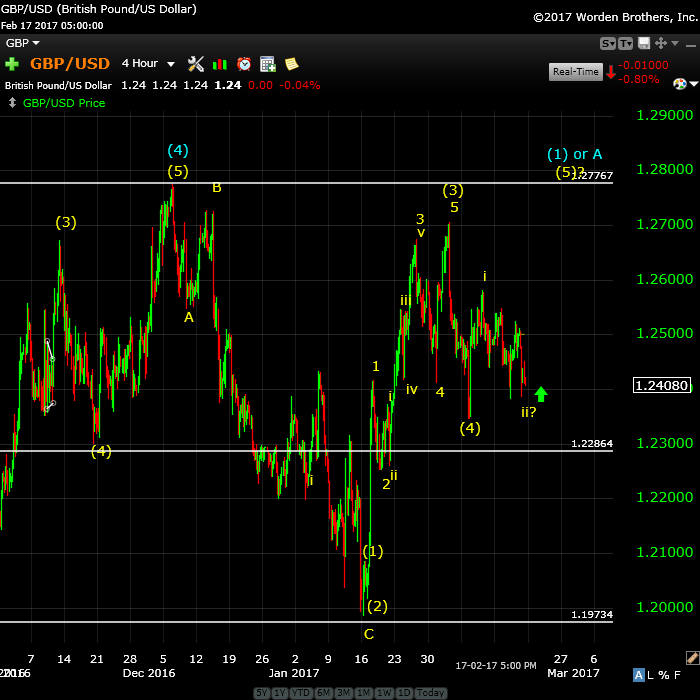 Above is the 4 hour chart of GPBUSD.  During the past week, I’ve been calling for higher levels and the pound has not disappointed. This currency pair, however, is bucking the trend of the other pairs (moving counter to the EURUSD, for example), but will likely get back in sync soon. I would expect everything to head in to the 5th and final blow-off wave together. 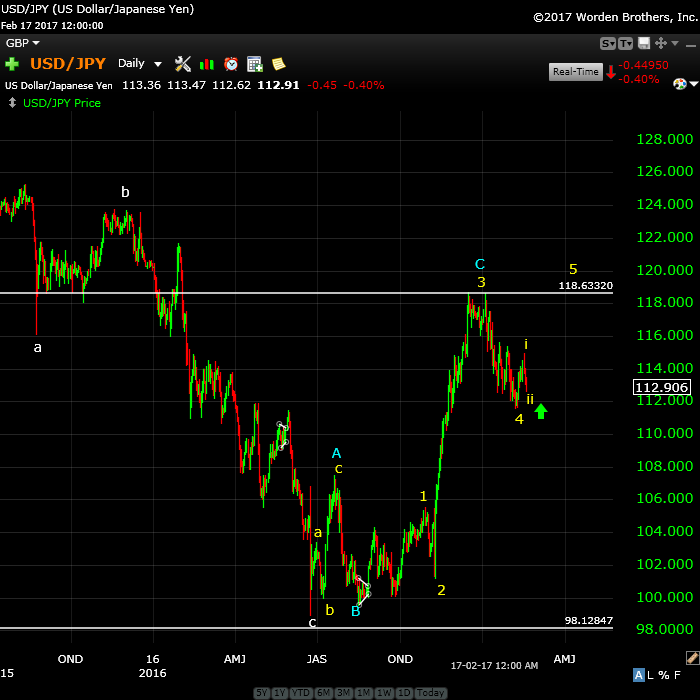 Above is the daily chart of USDJPY. We’re in a corrective pattern down and I’m expecting another correction up now to a target of about 118.63 (a double top). This will parallel the corrective moves in the other USD indices I cover (as they complete their second waves).

After hitting this target, expect a large C wave down with a target to come in the next update. 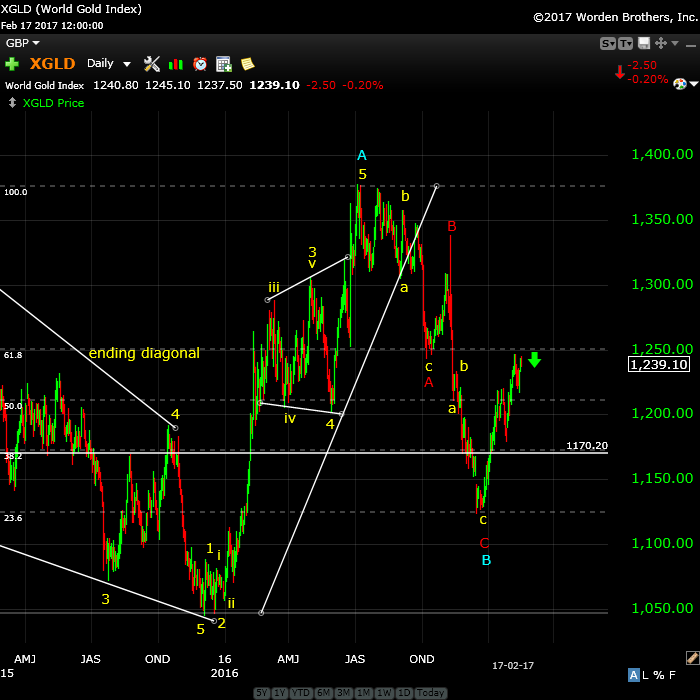 Above is the daily chart of gold. We’ve completed A wave up, but it looks to me as if it’s a wave four.

I’ve been calling for a double bottom for gold and this is still my preference. The wave up appears corrective to me. The wave up in silver appears even more corrective and they tend to follow each other.  The alternative would be a drop down to the 62% area around 1170, but I prefer the double bottom at about 1122.

Above is the one hour chart of XGLD showing a potential double top shaping up. We’re not quite there yet. If you love risk, you can go short at the double top. If you’re risk averse, look for 5 waves down to a previous low and the three waves up to about 62% of that distance down and enter there. Silver looks to be completing an ending diagonal, which predicts a sharp turn down to the start of the ending diagonal (about 17.25). 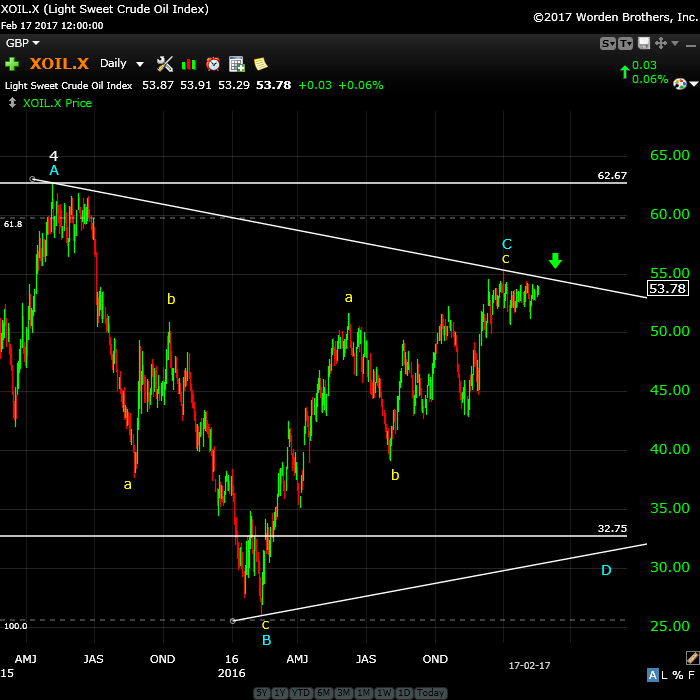 Above is the four hour chart of WTI Oil showing a possible triangle taking shape. If so, it will need one more wave down (E wave) before heading up to a double top. It may not be a triangle and in that case, may head up to a double top from here, but one way or the other, a double top is still my preference.