Update: Before the bell, Friday, Oct 2: Be careful this morning. I don’t like the look of the wave forming. It’s at 38% and may be forming a double top where it is.  It has not progressed very much overnight. So, we could have a sudden turnover here, or just a correction of this latest wave. That’s in the ES.

This seems to have ended as a second wave, making the previous forecast even stronger.

Update: End of day, Thursday, Oct 1: Today we began by topping at the end of the first wave up, dropping down almost exactly 62% in a second wave and then turning around in a third wave up. I project 5 waves up to test the previous high at SPX 2020. The third wave we’re in should reach 1.6 times the length of the first wave (~1986 SPX). Then we’ll have a 4th wave, which will retrace at least 38% before our fifth and final wave takes off. 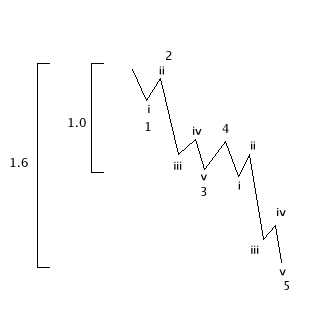 I’m using this in regards to our first wave of the fifth wave, which one way or the other, appears to be at an end. First waves down tend to have a much different structure than the ensuing odd numbered waves (3 and 5).

It’s actually two waves in one and the telling feature for me is the fact that there are two fourth waves within it at about the midway point. Wave 4 typically retraces to the previous wave 4 of lesser degree, or 38% or the length of the wave from the top.

Take a note of wave 2 in the diagram to the right. The absence of this in our first wave down (in the US cash indices) has created the enigma. Are we looking at:

Elliott when he wrote his theory stated that “the waves have to have the right look.” Wave 1 in the US indices across the board looks doubtful to me for a few reasons and so I’m sticking to my call that this is a corrective wave down (until proven wrong).

I think the worst thing in trading is to subjectively decide where a market is going before examining the waves in detail and this is where I see problems with counts. We call these “forced counts.” It’s critical to remain objective and let the waves “speak.”

Bottom line: We’re in a countertrend rally that will either retrace 62% of the wave down so far (creating wave 2) or we’ll retrace to the top and turn down into wave 1 of 5.

That being the case, my council would be to stand aside until we’re certain where the market is going. Either way (going to the top to start over, or turning over in wave 3 at the 62% retracement) will result in a long bear market drop. 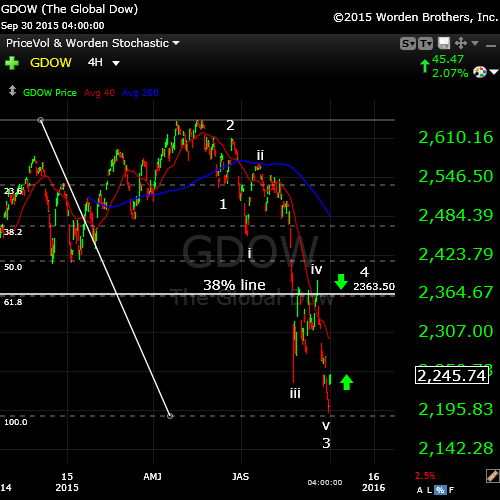 Let’s start with the Global DOW (GDOW). This chart has become clearer since I last reviewed it last week. We appear to have completed wave 3 down (of wave 1 – referring to the chart above). GDOW is now retracing to the previous 4th wave (38%) and will likely turn over into wave 5 of wave 1. It could also rise further to the 62% retrace level to turn down in wave 3 (alternate). 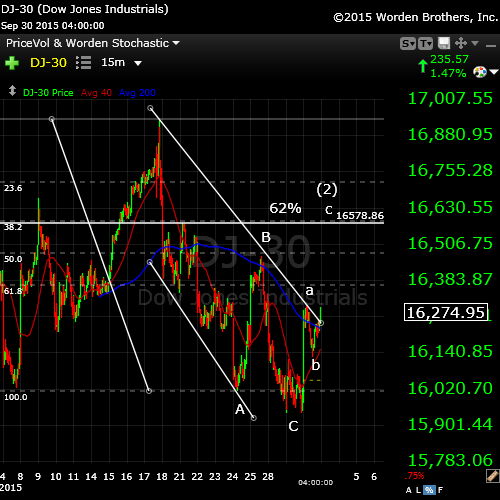 Here’s the US DOW (above). I’m labelling this chart as an ABC corrective wave as my preference for the reasons stated above. This would mean the wave should retrace right back to the top. the biggest challenge is the missing wave 1 and two). There is another problem with the ending wave, which I will share with you in a 5 minute DOW chart below.

You can see today’s corrective wave up starting to form. Today we completed the a and b wave and are beginning the c wave. If the larger wave down from 16,933 is motive, we should retrace to the 62% line in 3 waves. We would then turn over into wave 3 down. If this is indeed a corrective ABC wave down, we will go up in 5 waves (an ending wave) to the top and turn over there, starting down in wave 1. 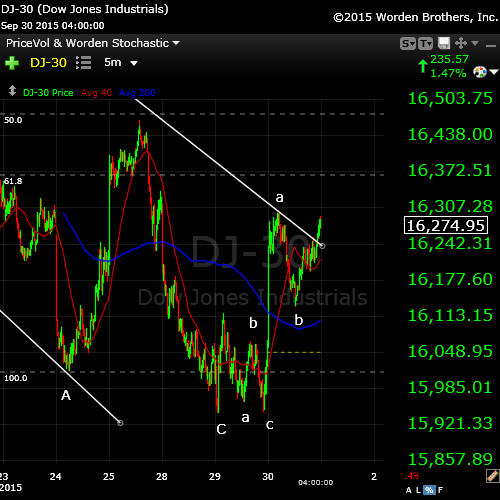 This is a 5 minute chart of the DOW showing the action of the last couple of days. Here’s another problem that occurs on all the indices: The ending wave is an abc wave. In a motive wave down this is not allowed. I see other trying to explain it with explanations that don’t hold water, as far as I’m concerned. This is the second major reason my preferred count is for a retrace to the top (based on the larger wave down being corrective).

You can also see here the abc rise of today. Wave c should continue up over the next few days. 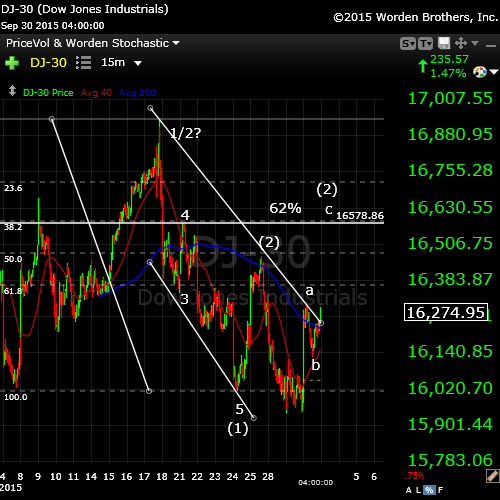 Here’s the alternative count on the DOW (above). I place this here to show the only way I can make a motive count work for the DOW. But at that, it supposed that either the wave has been truncated at the top or wave 1 and 2 are somehow buried in the sheer wave 1 down, which does not give the wave “the right look” and therefore to me is highly suspect.

If this alternate count were correct, we would head up to the 62% mark and roll over into wave 3 down, completing a double pronged wave 2. This also works for the ending wave, as the wave down from (2) would have to be in 3 waves. 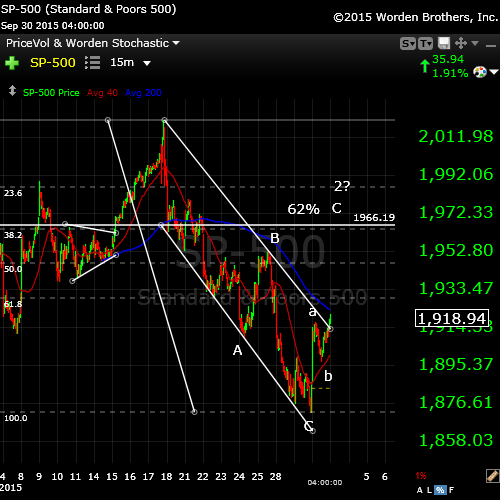 The SP500 (above) has the same issues as all the other indices. I’m showing the down channel here and you can see that the abc retracement from today has broken just about the channel line. The prognosis here is the same as for the other US indices. 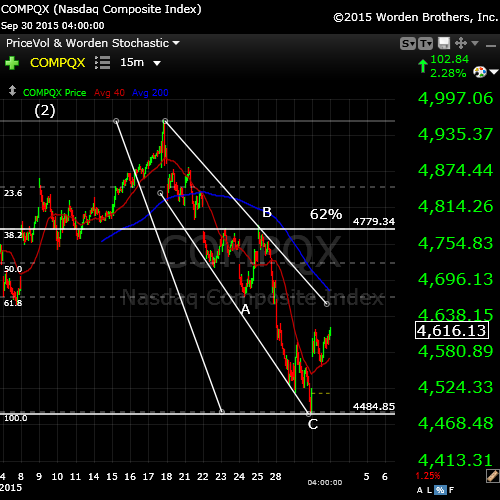 The Nasdaq (above) has the same configuration as the other US indices. 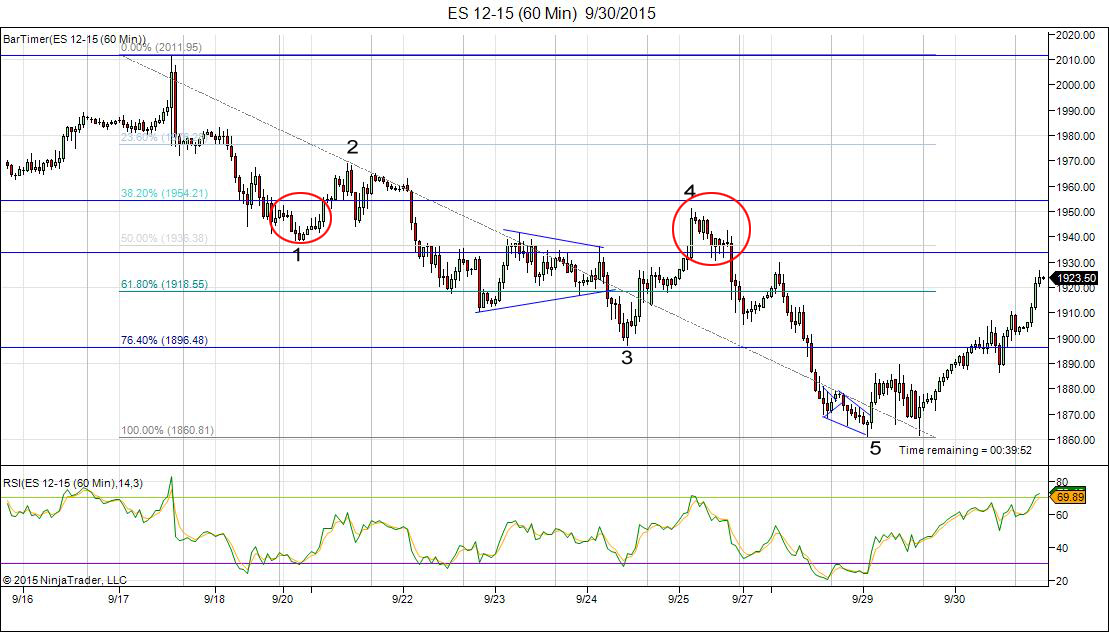 I took a look late tonight at the futures. I backed out the chart to a 60 minute view, something I guess I didn’t do in my analysis earlier. Now, I’ve numbered it as an Elliottwaver would if they were forcing a motive first wave down. The waves are fairly obvious.

Well, here’s the problem. One of the very strictest rules (that cannot be broken) is that the fourth wave cannot enter the area of the first wave. And sure enough, there it is. So, this confirms my count. We have a corrective wave down and we should at least tag the top.

Wave 2 is legal, as it retraced slightly above 38% but I never personally consider this a second wave. I’ve never, ever seen it work.

I ran these two charts last Thursday evening (Sept 24). I post them here just to remind you of what I’m getting from a cycles analysis. 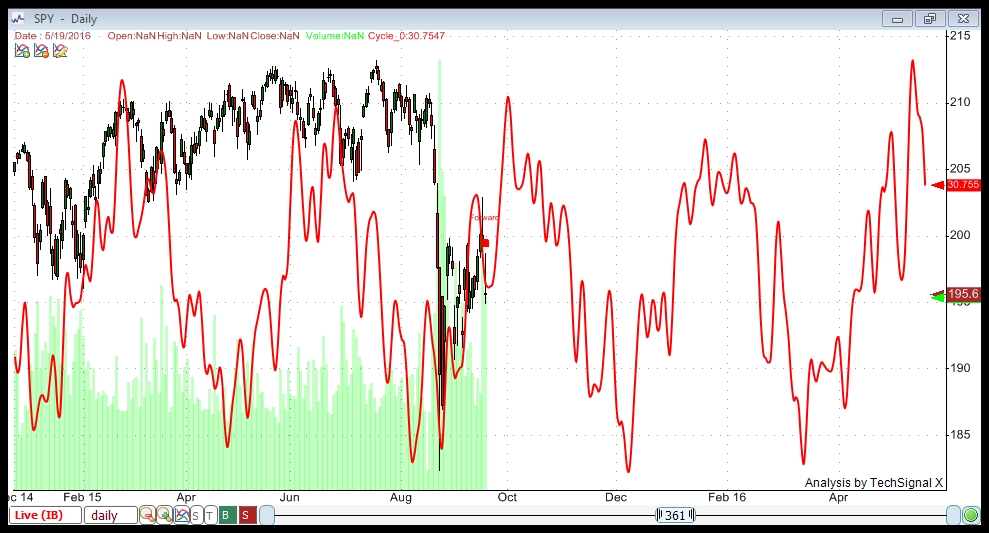 This is the first of two cycles analysis I ran. I’m using data going back to 2002 for both these charts. The software analyses all the data and finds all the cycles inherent in this asset. I chose the top eight cycles that it returned based upon returns in profit (if these cycles had been traded both long and short, from bottoms and tops, over the past 13 years).  Cycles repeat and so the past is a good indication of the future. This chart combines all the cycles found to provide a compilation wave. You can see how close-fitting it has been in the recent past. The fit with the current wave is quite stunning and therefore, something to pay attention to.

This analysis suggests a relatively strong positive bias to about October 1. 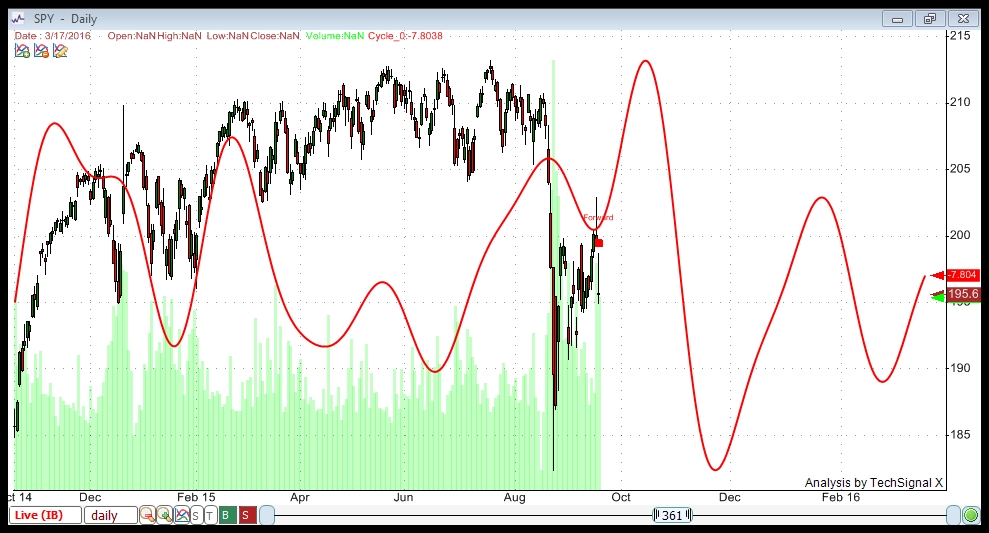 The second cycle I ran is the same as the first from a dataset perspective. This analysis focuses on percentage wins, playing both sides of the cycles. I used only the top 8 cycles (higher percentage win results) to result in a compilation wave. Choosing only the top cycles historically for this asset should provide a better forecast. The result is for a countertrend wave high into October. It is consistent with the first cycle analysis (net profit).

However, I note that the April through August time period shows a market with a possible inverse relationship to the cycle. That sometimes happens in cycles analysis. Therefore, there is a possibility that an inverse wave here (flipping the cycle vertically) suggests a turn down in the very near future, ending mid October. That would be in sync with the first cycles analysis I ran.