On the Hunt for Red October

The hunt for this elusive top continues! It might seem frustrating at times (I think so!) but the reward at the end will be worth the wait.

I was not feeling comfortable with where we topped and, in fact, was surprised. We’d had a very shallow 4th wave and then a small top, which I thought was a final, somewhat truncated fifth. In retrospect, it wasn’t. It was the end of the third wave of the fifth wave up. Today we had the real fourth wave down and so we have one more wave to go up to the top.

Tonight in the futures, we’re already well on our way. So I would expect to see the top this week.

I had mentioned a number of indictors pointing to a top on October 13.

They’re all  still valid. In fact, cycles aren’t as accurate as a specific day, but they’re usually not more than a few days off. That’s because cycles can slide slightly over time and we’re analyzing 13 years of past data.

In today’s post, I’ll look at what happened today and where the market went wrong. I’ll use the SP500 as an example. And then I want to go through the major indices and show the big picture. Because they’ll all in the same boat; they’ve all done a fourth wave and have a final gap to fill to the 62% line. 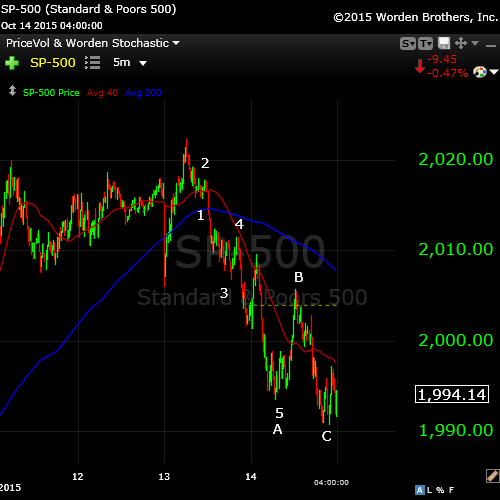 Here’s a 5 minute chart of the SP500 from today. We came down in 5 waves yesterday, except the second wave was somewhat muted and was making me uncomfortable. Then today, we headed up in a B wave (really unexpected) and then headed down in a C wave.

So what looked fairly good yesterday, all came apart today. We’ve ended up with 3 waves down. At the end of the day, we were obviously forming a double bottom and all the momentum was gone. In fact, there wasn’t much momentum at all today, something I commented on about midway through the day. The waves just didn’t “feel right” or “look right.”

So … three waves down means we completely retrace. We head back to the top. 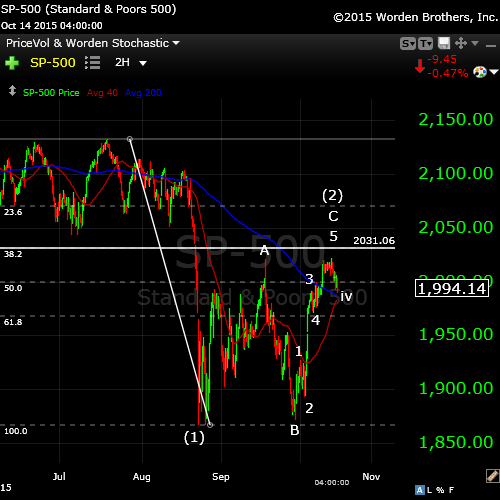 The 2 hour chart of the SP500 (above) shows the big picture. It’s very much like the chart from two days ago, except for the fact that we now have a fourth wave. This fourth is a subwave (the fourth of the fifth of the C wave). I haven’t labelled all the other subwaves due to the lack of space.

I’ve placed the 62% retrace line (from the market top) on the chart. I was surprised when we didn’t hit it. But a mentor of mine once said:

“The market will do the obvious thing in the most un-obvious way.”

It’s one of the truisms of the market that I tend to repeat out loud when days like today happen. It’s obvious to me that we’re going to trace out a large second wave. All the indices are very close. So the target for the SP500 is about 2030, as it was two days ago. We could go a bit higher, but we need to reach that objective.

Here’s the explanation of the correction we’re forming on almost all the indices: a regular flat.

Based upon my scenario of an ABC down wave from last week and an “ending wave” up, here’s what remains of the path. The wavelengths in this final C leg up are textbook. 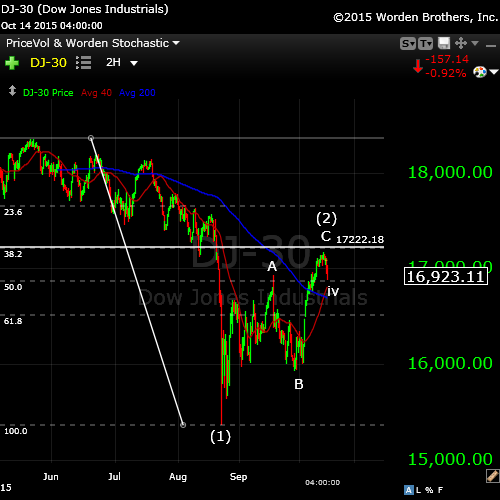 Above is a 2 day chart of the DOW. I’ve overlain a fibonacci retracement tool to give an indication of our target for the final fifth wave. The horizontal line marks the 62% retrace objective. 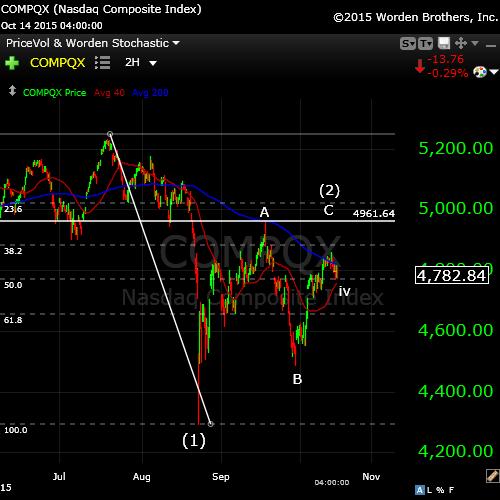 The Nasdaq now looks the same as the other indices. This final leg up should extend to reach the previous spike top at 4960.87. I haven’t drawn in the 62% retrace line as we’ve already exceeded it. The horizontal line marks the previous top, which I expect we’ll test before turning down. 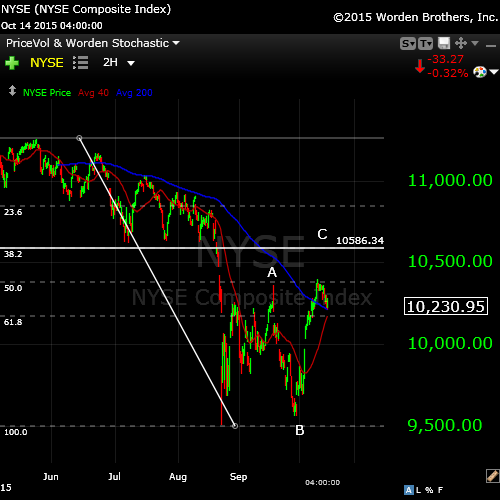 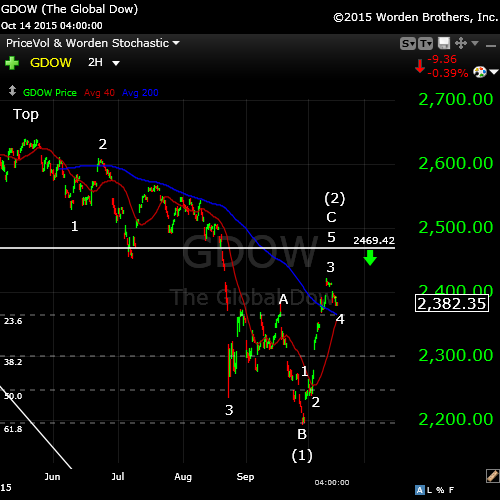 The Global DOW (GDOW) has retraced up to the same relative spot as the US indices. I’m expecting it, too to rally to the 62% line to trace out a 2nd wave before a turn down in a 3rd wave. This would fit with the prognosis in the US markets and reinforce my count there as a second wave retrace. 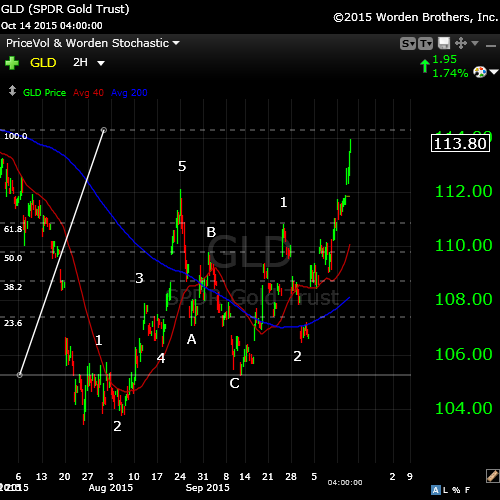 Gold (GLD) above continues the rally. On a larger scale, I expect GLD to retrace to the 62% level, which is at about 153.00. It has a long way to go. You can see here that we’ve completed a first wave up in 5 waves, have retraced in an ABC pattern and are entering the 3rd of 3rd wave up (after completing waves 1 and 2 of 3).

So … there’s a lot happening in the area of cycles right around now. The week of Oct 13 looks important to a possible major market turn.