The Cycles Turn Down

Finally we have a full ending diagonal in ES: 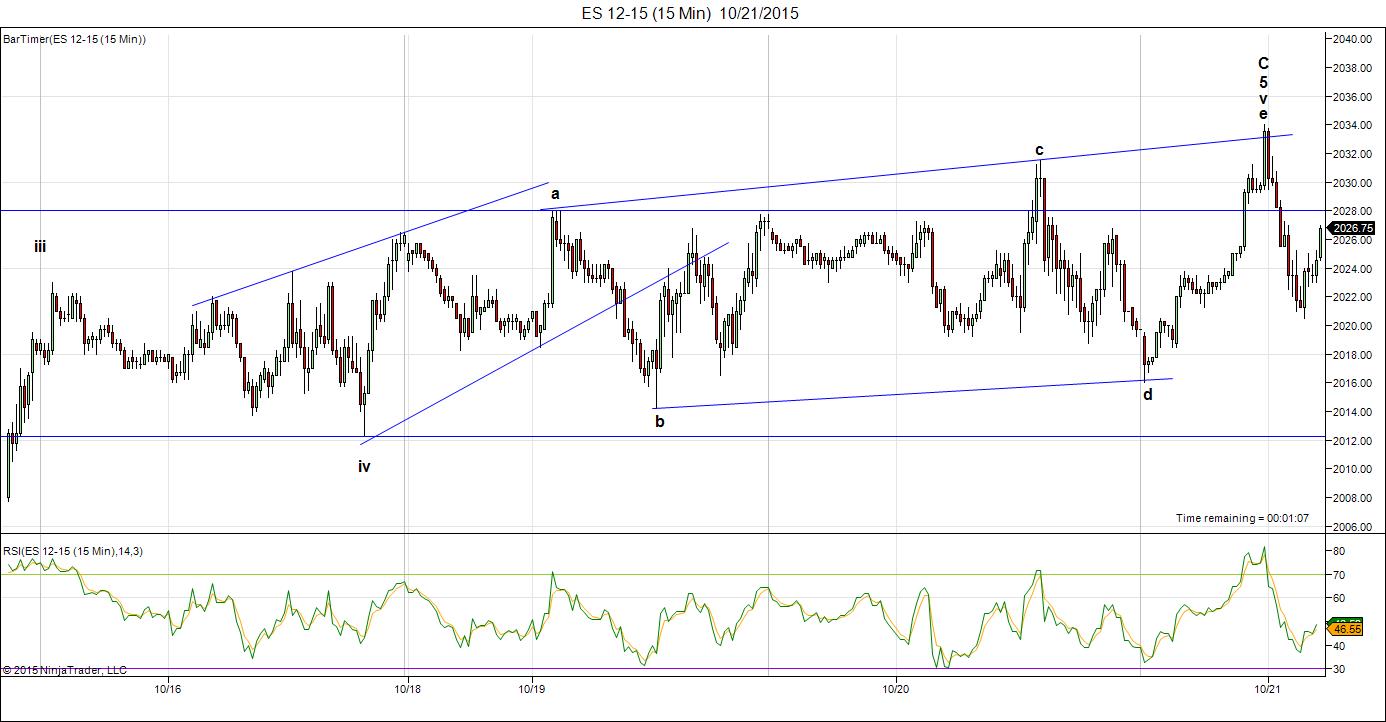 Above is the chart of ES (SPX futures) with a full ending diagonal marked. During the evening on Tuesday, the final leg (e) traced out and it became clear that we had a full ending diagonal. The SPX may have already completed one wave down and in that case, we’ll like see a second wave in all the indices and futures this morning, heading down into a third wave.

Either that, or we’ll head back up to the top to test one final time, but it’s really not necessary as the ending diagonal pattern is complete in both cash and futures. 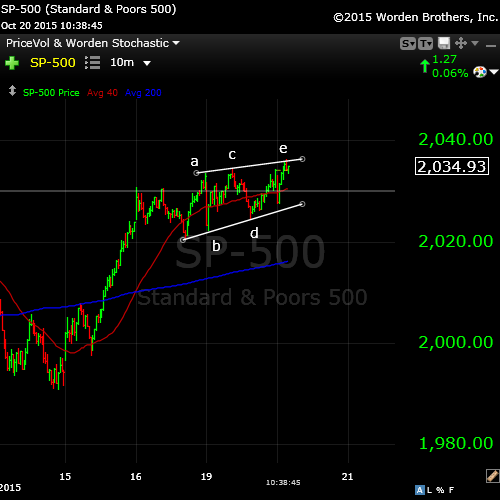 Above is the SP500 as it is at 10:30 am EST. We’re just completing an ending diagonal. The final wave is in. We just need a turn down.

Monday, October 19 looks like the big day. I expect the markets to turn down at some point during the Monday session.

Last week, I had suggested October 13 as a possible top. The cycles were pointing to that date, as were some planetary influences. And we were close to a top in the Elliott wave count.

So, why didn’t we top? Well, we were missing one last wave up, which became very apparent when we had a very choppy 3 wave drop to the downside. 3 waves always means a retrace.

Now, let’s address “cycles.” When cycles show a top, they’re really in neutral territory. Cycles haven’t actually turned down; there’s no impetus to head lower. However, a few days later, once the cycles have descended to a lower level, pressure begins to mount and the effect should get stronger and stronger for the market to follow. I find the analysis program I use to be extremely good at forecasting turns, but cycles can slide slightly over time. Accuracy within a week or so is really a terrific outcome.

In today’s post, I’ll look at what happened Friday and where I think the market is headed. I’ll use the SP500 as an example. And then I want to go through the major indices and show how they’re all on the same page.

Bottom line: We have a pending top in place. I expect a turn down on Monday. The SP500 (and Russell 3000) have gaps nearby. It remains to be seen whether they will get filled or not on Monday.

Wave 2 or 4? There is a question as to whether the very large correction we’ve been experiencing since August 24 is wave 2 or 4. Because the NYSE (comprising all the US stocks, except the Nasdaq) has not reached 62%, which is the usual target for wave 2, I’ve decided to label the correction as wave 4 until proven wrong. This makes the downside less limited. However, once we see the length of the first wave down, it should give us a clue as to whether we’re in wave 5 or a very much larger, higher degree Wave 3.

Here’s a textbook projection of where wave 5 might go, based upon this being a completed 4th wave correction. 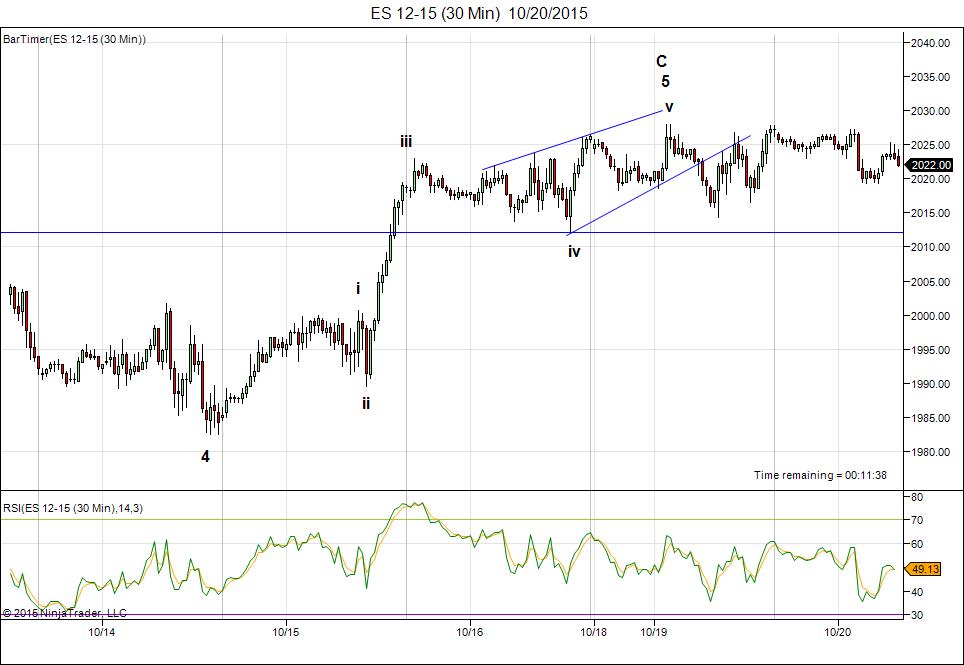 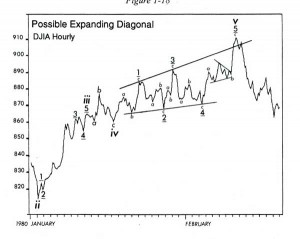 On the left is a diagram of an expanding ending diagonal from The Elliott Wave Principle, by Frost and Prechter) you’ll find this book in my recommended book list of the site.

Ending diagonals typically exhibit a “throw-over,” so the ES could go a little higher, but the turn is usually dramatic and retraces the entire structure (to wave 4) very quickly.

Sunday may see the futures retreat and then return to a double top on Monday (not shown in the diagram to the left). It doesn’t always happen, but it’s relatively normal.

Let’s get on to the cash indices: 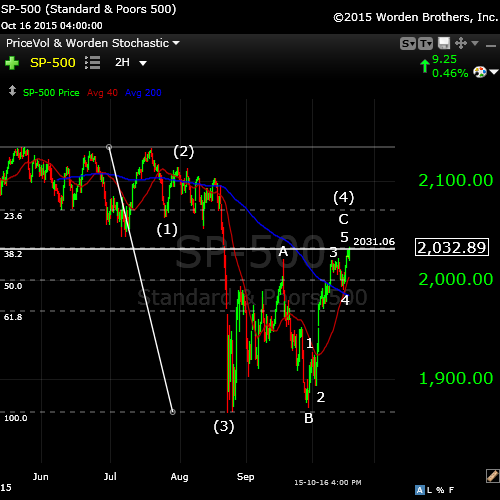 The 2 hour chart of the SP500 (above) shows the bigger picture. We traced out a fifth wave on Friday afternoon that may or may not be complete. There’s a small gap about two points above the current level and that may need to be filled. Otherwise, the structure is complete and we’re poised to turn down.

I’ve placed the 62% retrace line (from the market top) on the chart. This is the target I’ve been suggesting we would eventually test. On Friday, we slightly exceeded it.

Let’s look at the bigger picture to get a sense of where we’re possibly going longer term. 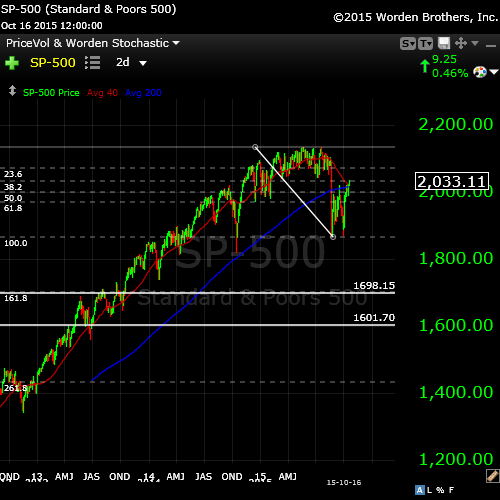 Above is a 2 day chart of the SP500. I’ve overlain a fibonacci retracement tool to give an indication of our target if this is a typical first wave down. In that case, the 5th wave is typically the same length as the first three waves combined. This would suggest our target is somewhere in the 1600s area.

Once we’ve seen the first wave down, it should give us an idea of the magnitude of the balance of the descending waves. 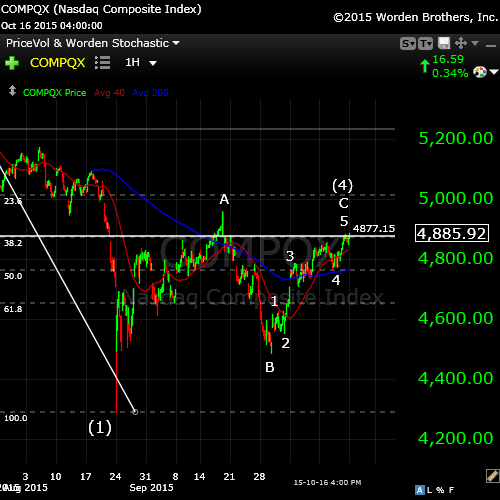 The Nasdaq now looks the same as the other indices. This final leg up reached the 62% retrace line (the horizontal line) on Friday and slightly exceeded it. We’ve traced out a complete set of 5 waves up, or it should complete on Monday morning. 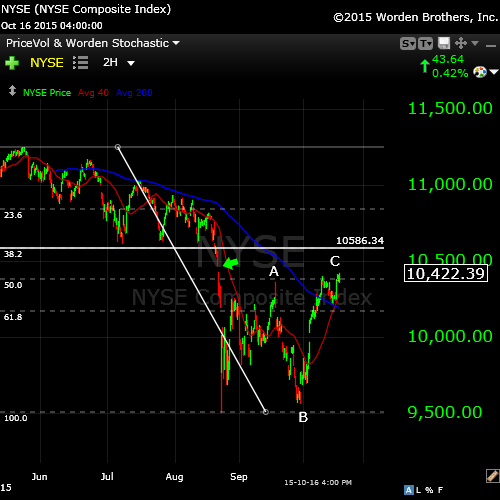 The NYSE (above) has not met the 62% retracement level (horizontal line). This is what has led me to believe we’re still in a 4th wave correction. If somehow we reach the 62% mark before turning down, I will likely update my labelling. In any event, the wave structure looks complete or almost so. 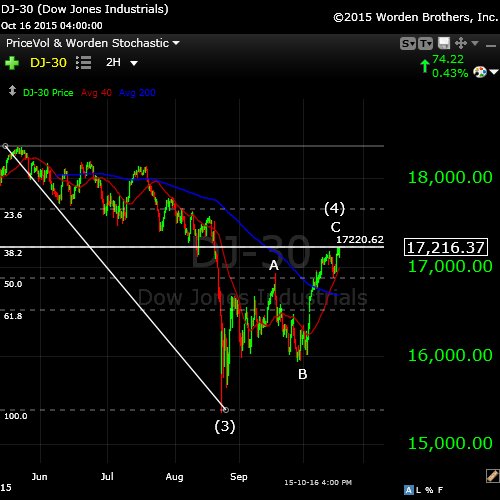 The DOW (above) tagged the 62% level exactly on Friday afternoon with a double top. 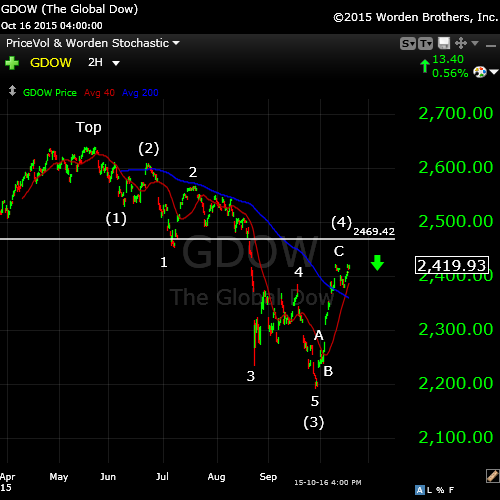 The Global DOW (GDOW) has retraced up to to almost the 62% level (horizontal line) but is still short. It has also done a double top. I’m expecting it to turn here or at a level nearby. This is another reason (as per the NYSE) that I have gone back to labelling all the US indices as fourth wave corrections. 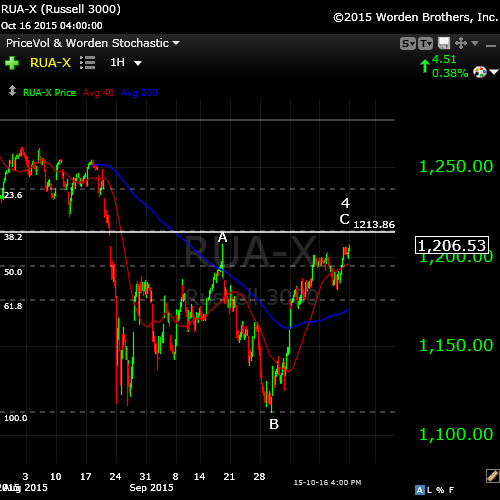 The Russell 3000 (RUA) ended Friday with a double top and what looks like a completed set of 5 waves up. It did not quite reach the 62% retrace level, but it’s so close, it could easily do so on Monday morning. It’s a slightly different pattern than the other indices in that it’s done an ABC correction to a new low (the B wave hit a new low, and was also in 3 waves down). This C was is in 5 waves up, which is an ending wave, of course. This would be a typical setup for a wave 3, so we certainly have indices suggesting alternate degrees for the next wave down. We’ll just have to see what happens.

I ran this chart Friday, Oct 16 after the market close. Not much has changed from the cycles analysis from a week ago.

This analysis suggests a cycle top of October 13 (starting down on the 14). Oct 13 was also the new moon.

So … there’s a lot happening in the area of cycles right around now. The week of Oct 13 looks important to a possible major market turn.