The Higher They Rise …

Update, Tuesday, Oct 27: We seem to be waiting for the FOMC meeting and subsequent announcement (at noon on Wednesday). I suspect we’ll have similar action to the September 17 announcement. It should mark the top of this second wave.

So far today, the SP500 has come down in 3 overlapping waves to complete a fourth wave. It’s clearly corrective. That means we need to head back to the most recent top.

Over the next 24 hours, I suspect we’ll see a small, fifth of fifth of fifth wave up to an eventual top in both the cash indices and futures. From there, we should head down into a third wave. The chart of the SP500 from Saturday remains valid. 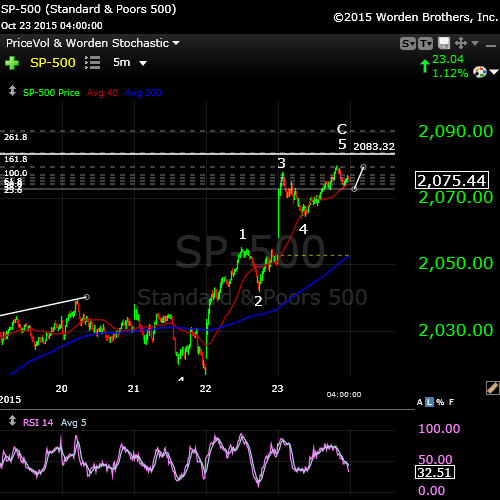 Above is the breakdown of the final wave today of the SP500. This is a 5 minute chart, so it’s only showing the final 5th of the 5th of the C wave. I’ve updated labelling based on the waves on Friday and it’s now clear that the wave 1 on the chart (on the ECB announcement on Thursday morning, Oct 23) is much longer than the ensuing waves. It should be the opposite, of course. So the waves appear to be getting shorter and shorter.

Wave 3 on the chart should be 1.6 times the length of wave 1, but it’s actually shorter than wave 1. That’s very bearish. We’re struggling.

2083 is the projection if the fifth wave is 1.618 X the length of the first wave of the fifth (the usual length), but based on the wavelengths so far, it’s likely we won’t make it that far. 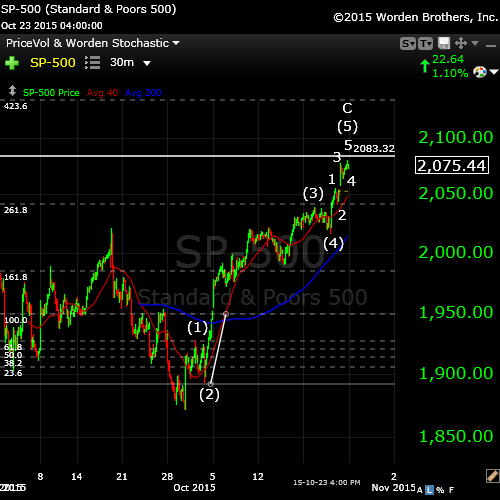 Note that wave (3) is 2.618 X the length of wave (1), which is a proper ratio. So it’s the final 5th of fifth that’s struggling, and each wave within it is getting shorter, as the top chart shows.

One more really interesting chart for today, from a cycles perspective: 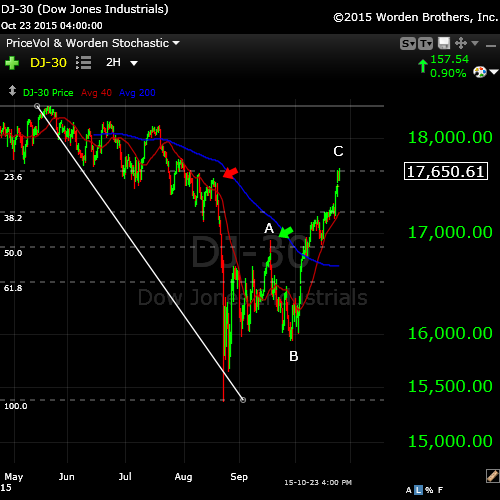 One more kind of interesting chart of the DOW (from a cycles perspective): 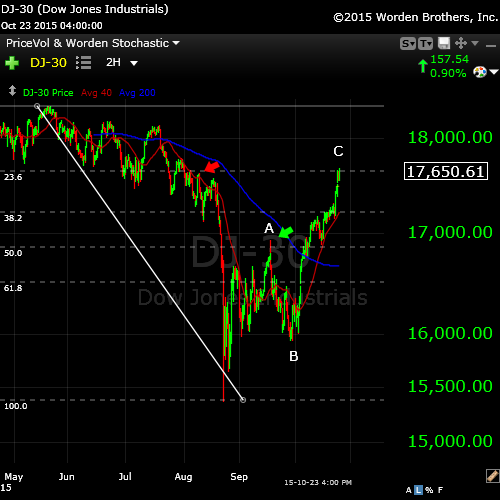 The chart above is of the DOW (2 hour chart). I’ve marked a spike on August 10 just before the start of the big drop. I count that point as the start of the fifth wave of the first down (red arrow). It was 37 days later that we saw the top of the September 17 spike (green arrow). It is now exactly 37 days to where we are now at C.

Be on the alert for an opening gap reversal this morning. That’s when the futures have risen overnight and as a result, the cash indices open and immediately reverse to the downside.

We had a big rise in future overnight and the setup is such that there’s a high possibility this is the top and will quickly reverse. I now count 5 full waves up in the fifth of fifth wave of C and it looks like we’ve gone up high enough that the NYSE and GDOW may have hit the 62% mark (won’t know until the open, of course). This is the perfect setup for a reversal, so we’ll see what happens.

The safest way to enter is to look for 5 waves down and then 3 waves up to 62% and if we top here, I’ll be on the lookout for that and put an alert in the comments. 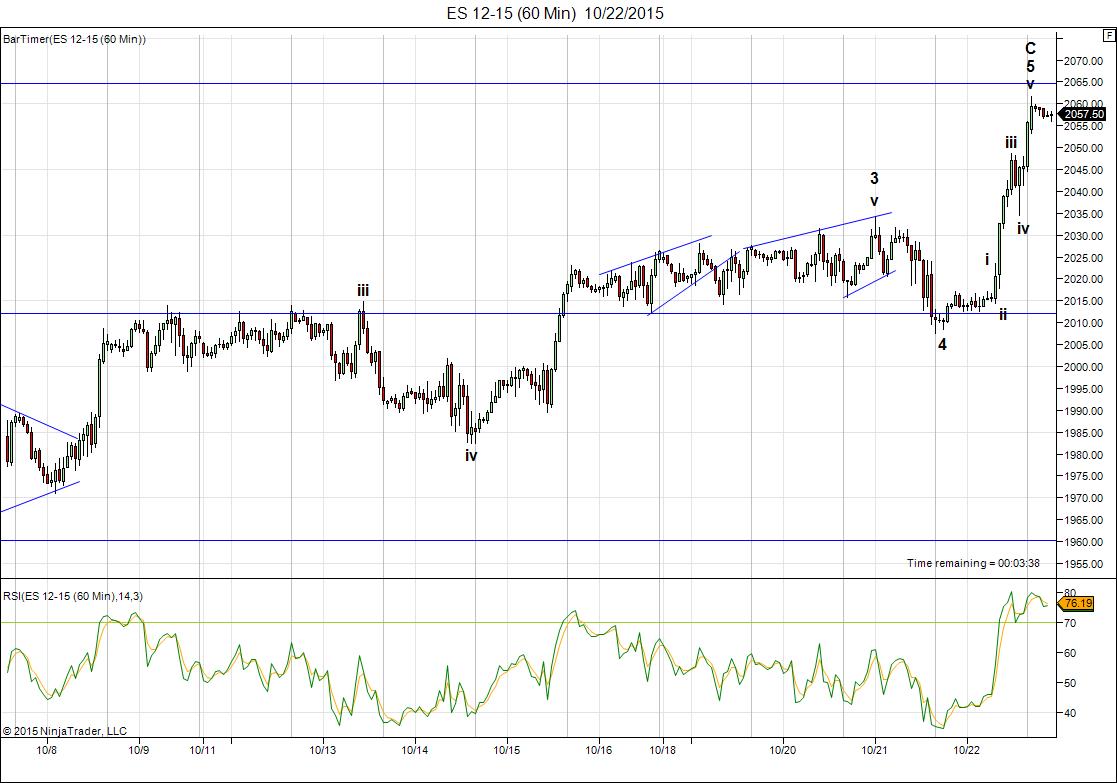 Above is the chart of ES (SPX futures) with a full ending diagonal marked from Tuesday of this week. On Tuesday night, we made a new high, which changed the structure of the diagonal and in fact, the next day, a final leg failed and we headed down.

I was out on Wednesday evening and did not get a chance to do a full analysis of the market. If I had, it would have been apparent that we had a wave 4 staring us in the face with overlapping waves down. I’d thought we were looking at a 5th wave top, but in fact, it was only the top of the third wave. I have relabelled the chart, as a result.

We’ve rolled into the fifth and final wave up rather quickly today and it’s almost at an end. You can click on the chart to expand it for a better look.

In today’s post, I’ll look at all the indices and how they’re all in a similar position.

Bottom line: We have a pending top in place. I expect a turn down imminently. All the indices are now above the 62% retracement level, except for the NYSE and GDOW, which are both very close.

Wave 2 or 4? There is a question as to whether the very large correction we’ve been experiencing since August 24 is wave 2 or 4. Because the NYSE all the indices are above the 62% level (except for two), I’m switching back to calling this wave “wave 2,” which means a very much bigger drop to come than we would have had with wave 4. Also this wave is just too long in terms of time for me to consider that it’s wave 4.

Let’s get on to the cash indices: 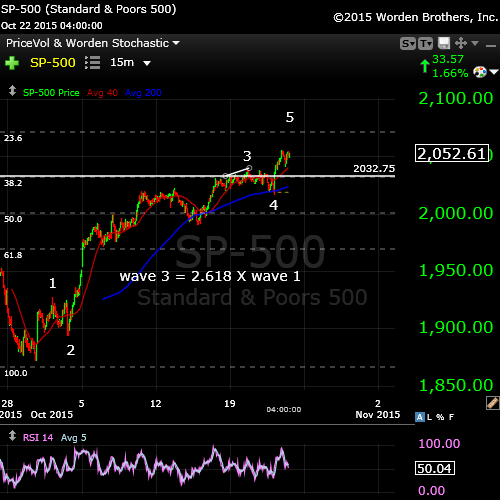 The 15 minute chart of the SP500 (above) shows a breakdown of the C wave with 5 waves up, almost at an end. Futures tonight have risen quite a bit, so we’ll need to see the open in the morning to figure out where we are and whether we’ve completed our five waves up.

I’ve placed the 62% retrace line (from the market top) on the chart. This is the target I’ve been suggesting we would eventually test. On Friday, we slightly exceeded it.

Let’s look at the bigger picture to get a sense of where we’re possibly going longer term. 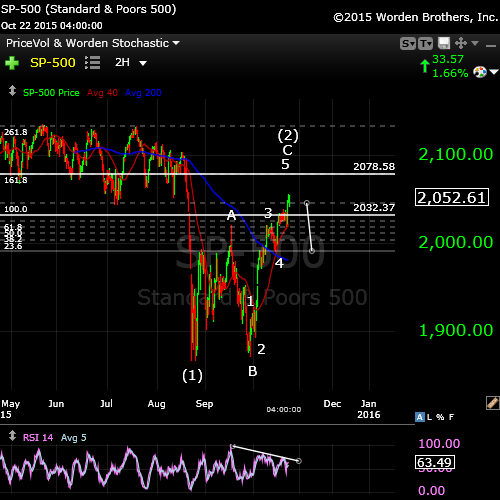 Above is a 2 hour chart of the SP500. I’ve overlain a fibonacci retracement tool to give an indication of our target if this 5th wave traces out its full length (which it often does not do at the tail end of a correction). The full length of the fifth wave is typically 1.618 X the length of the first wave. This would give a top of about 2078. However, it’s more likely it will end before that figure.

** On all the charts, I’ve included the RSI reading and in some, provided a line  showing the divergence.

Once we’ve seen the first wave down, it should give us an idea of the magnitude of the balance of the descending waves. 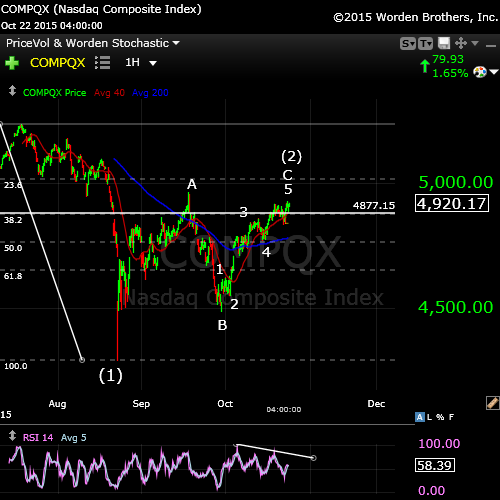 The Nasdaq now looks the same as the other indices. This final leg up reached the 62% retrace line (the horizontal line) on Friday and slightly exceeded it. We’ve almost traced out a complete set of 5 waves up, and tonight, futures rose substantially and may have surpassed the previous spike high at A.

As a regular diagonal, the C wave should exceed the top of the A wave. 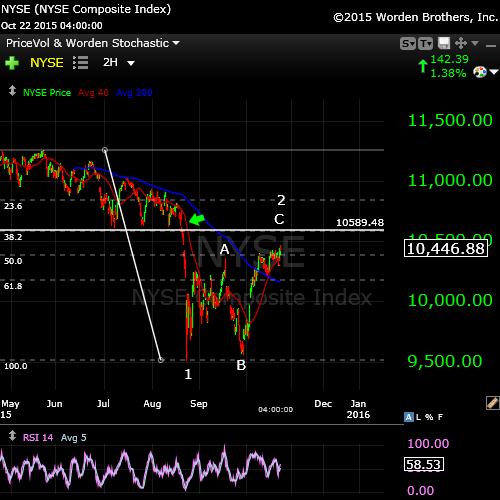 The NYSE (above) has not met the 62% retracement level (horizontal line). This is the index that’s lagging all the rest and I would expect it would make the 62% line before turning down.

I’ve also marked a small gap that exists just about the 62% retrace line, but I don’t know that it will get filled. 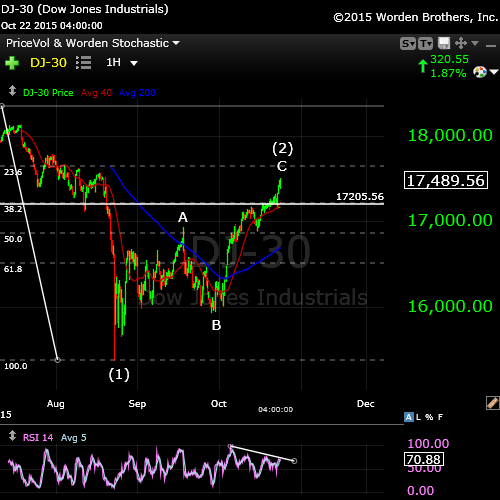 The DOW (above) tagged the 62% level exactly on Friday afternoon and is now well above it. 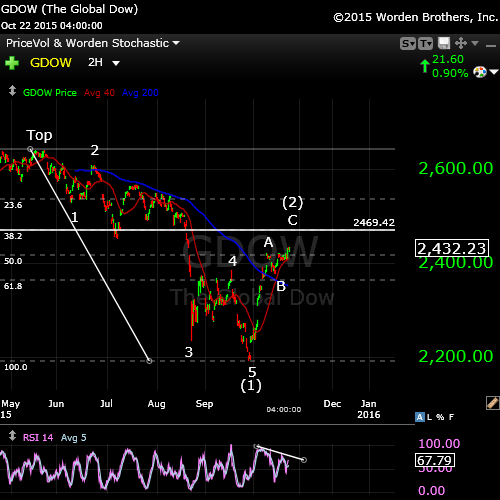 The Global DOW (GDOW) has retraced up to to almost the 62% level (horizontal line) but is still short. This is the only other index (besides the NYSE) that has not reached the wave 2 expected target of 62%. 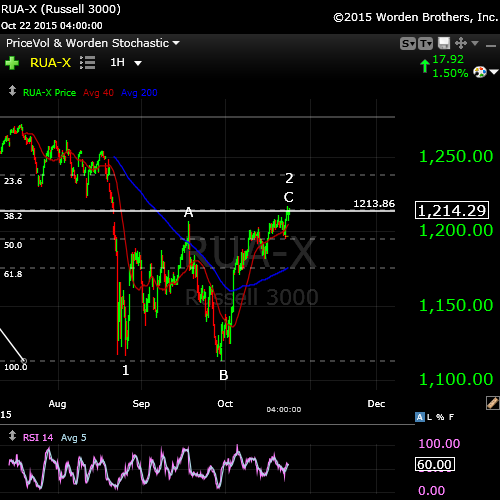 The Russell 3000 (RUA) on Friday had not quite reached the 62% retrace level, but it’s there now. It’s a slightly different pattern than the other indices in that it’s done an ABC correction to a new low (the B wave hit a new low, and was also in 3 waves down). This C was is in 5 waves up, which is an ending wave, of course. So this index lines up with all the others above.

I ran this chart tonight, Thursday, Oct 22 after the market close. Not much has changed from the cycles analysis from a week ago. You can click on it to expand.

This analysis suggests a cycle top of October 13 (starting down on the 14). Oct 13 was also the new moon.

So … there’s a lot happening in the area of cycles right around now.