A Little Yellen and a Lot of Cryin’

Futures acted much as I expected overnight. They completed what looks like a small 5th wave and then retreated and are sitting, waiting. The euro continued up and should get to the previous 4th at 1,1090 before turning down in a second wave. usdcad hardly budged but it set to head down.

We seem to be set up for the possible turn. 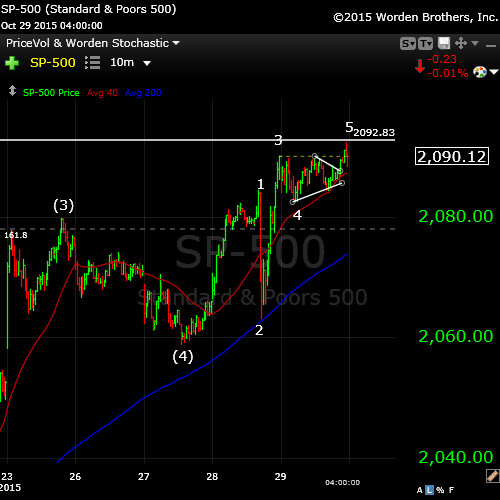 Above is the SP500 (10 minute chart showing the final wave up). I count the wave complete, other than a probably double top. You can see the triangle traced out during the day and the fifth wave up from there. You can see how the waves just keep getting shorter and shorter.

The futures still have to top but will likely do that overnight and the Nasdaq is still lagging. The NYSE has traced out a triangle, which denotes an end wave. We should be set up for a reversal to the downside. The eur/usd appears to have reversed with a set of first waves up (in 5 waves) as has usd/cad.

Update Thursday, Oct 29:  All eyes on currencies this morning as they’re starting to move. CAD, for example is reversing and will need to retrace the 62% (a second wave) from the highs. Euro should head up and the dollar down.

I have been saying for some time that the euro moves inversely to equities. That’s still appears to be the case. It’s a countertrend move, but the euro has to at least retrace 38% of the wave down (I expect 62%) and it hasn’t done that yet.

In equities, we came down overnight in three waves. I would expect a retrace. Watch for the double top.

NOTE: If we continue up past this top, I would have to seriously consider the stance and my prognosis for a turn down now. So I think we have an inflection point here. I count a fully set of waves up and the NYSE is reaching its target. We have to keep this in mind. I have to keep objective and although I don’t see support for a continued move up, it is what it is.

Original Post: If you’re a bull, this sums up what I project the near future to hold. Fed Chairman Janet Yellen puts out the monthly FOMC announcement at noon EST today and I expect an outcome similar to that of Sept 17. We will likely rally during the morning and turn down sharply either with the announcement of shortly thereafter. The rest of the week should be bearish.

In Elliott wave lingo, we’re heading down into a third wave, which should be a sharp drop to at least 1.618 X wave 1 down (to Aug. 24). A long consolidation in wave 4 should follow (a couple of months likely) and a final drop into wave 5, which should be of a similar length to wave 3. I’ll be able to get more specific on all these targets once we’ve completed wave 1 of 3.

Let’s look at where we’re sitting in futures this morning: 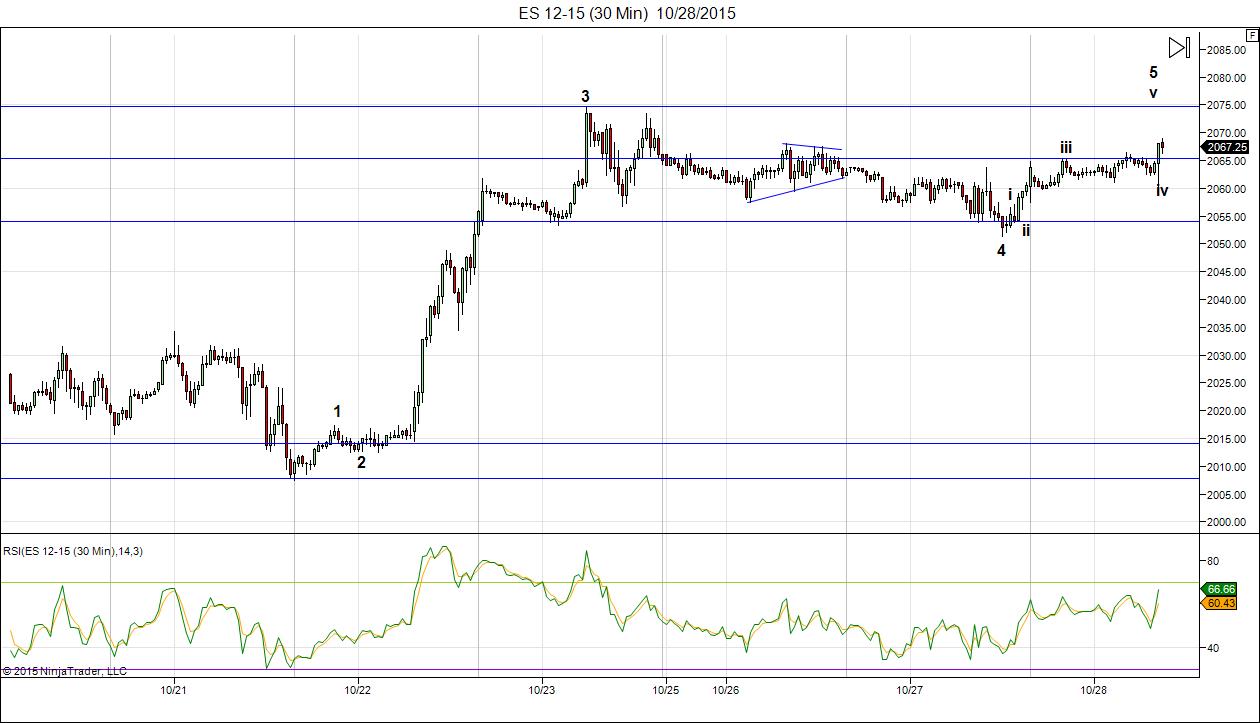 Above is the ES (SPX futures) showing the rather flat fifth wave. I put us in the final small wave up. There are a couple of ways to label this and the waves are so small, that’s it’s possible we could rise to the original target of 2038, but the market is so weak, I’m not counting on it. My preference is for a double top. The NQ (Nasdaq futures) looks to have already completed an ending diagonal and is poised to complete a double top. So we are literally waiting for the announcement.

In today’s post, I’ll update all the indices to this morning (Wednesday, Oct 28) 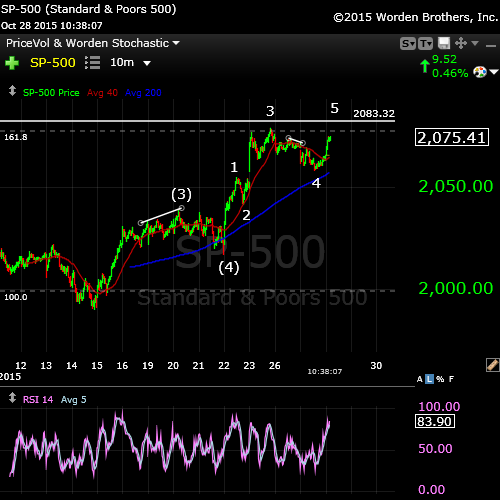 The 10 minute chart of the SP500 (above) shows a breakdown of the C wave with 5 waves up, almost at an end.

I’ve placed a line at what might be the final target for this last wave. We may not make it that far.

At the time of the FOMC meeting, we might have a spike up, but the spike should not last that long. I would expect a turn down before the end of the day and it will likely be sharp. 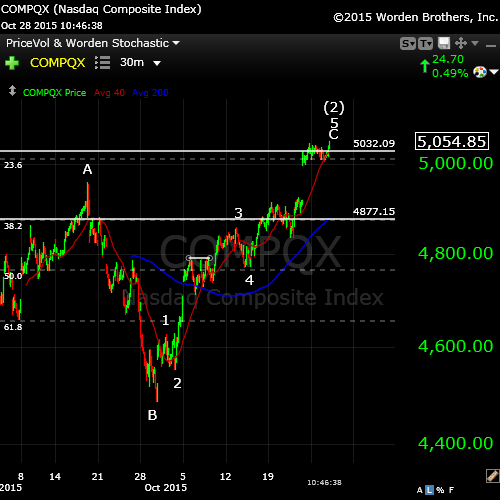 The Nasdaq (above) now looks the same as the other indices. We’re very close to the end of the fifth and final wave, which will require a turn down. 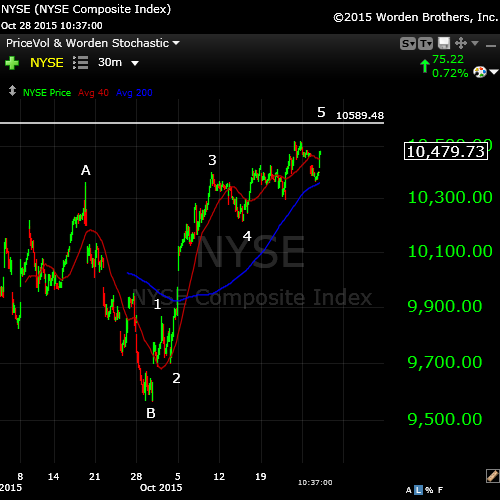 The NYSE (above) has not met the 62% retracement level (horizontal line). This is the index that’s lagging all the rest and I would expect it would make the 62% line before turning down. We’re so close that it might simply make the previous high. 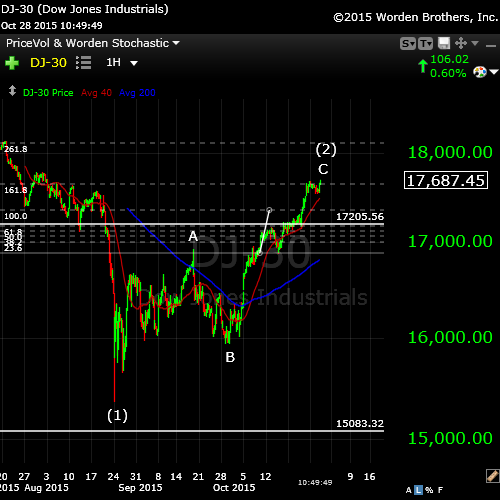 The DOW (above) is also just about at the end of the final 5th wave. 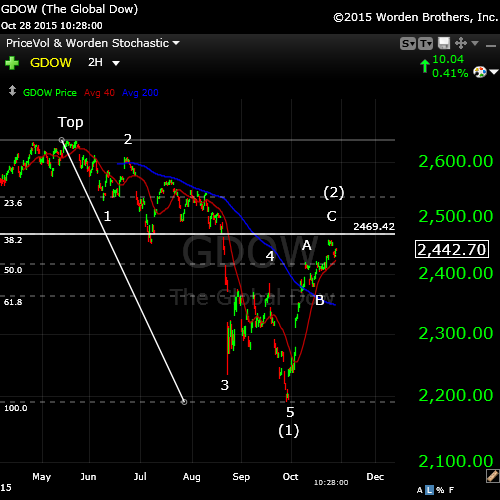 The Global DOW (GDOW) has retraced up to to almost the 62% level (horizontal line) but is still short. This is the only other index (besides the NYSE) that has not reached the wave 2 expected target of 62%. This may be good enough, however. It’s just about there. This also creates the second wave scenario in the GDOW with a long 3rd wave down to come.

I ran this chart this morning, Wednesday, Oct 28. Not much has changed from the cycles analysis from a week ago. You can click on it to expand.

This analysis suggests a cycle top of October 13, so we are overdue for a turn down.

So … we are also due for a turndown based on the Puetz crash cycle.