The Influence of the Moon

Most of us are aware that the Moon has an influence on the market. I thought it would be interesting to see how the Moon has affected this sideways market since the beginning of the year. To do that, I’ve overlain arrows showing the Moon events since January 29, 2018. 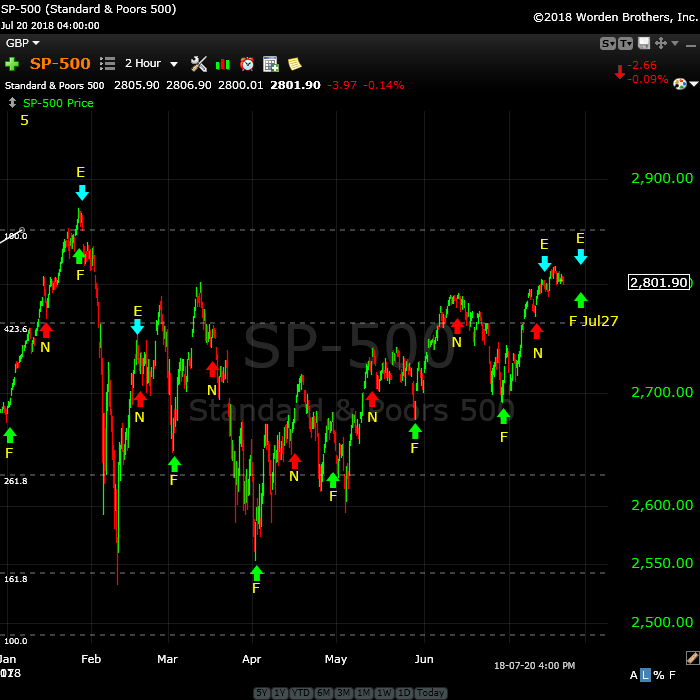 Above is the two hour chart of the SP500 showing the start of the fourth wave (top of the third) at January 29 through today’s date.

What’s interesting is that the full Moon hit turns each and every time, the bulk of them lows. It seems to be a reliable marker of turns, and the turns are, for the most part, turns to the upside.

New Moons were not reliable. They tended to mark a turn of some type, but they weren’t major tops or bottoms.

The first two eclipses hit turns, but they also marked a new and full moon turn, so it’s difficult to ascribe any real significance to them from this limited chart example.

In the Chart Show this past week (Wednesdays after the market closes), I showed the ending diagonal that we're so obviously in on a 60 minute chart and was expecting a top very soon (in fact, the next couple of days).

Well, the market has chosen to stay up just a little bit longer, but I'm expecting an imminent turn down after a new high.

The downturn will lead to the fourth wave of the large ending diagonal that we've been in since February 9, 2018.

Fourth waves of ending diagonals usually come down quite quickly. As a example, there appears to be one in progress on the hourly chart of USDJPY. I expect a bottom there very soon (perhaps Monday) around the 110.00. But the point is that it's come down very quickly. They come down in three waves.

The third wave of the larger ending diagonal, which we've been in now since the beginning of April (16 weeks as of this weekend) is always the most complex and longest wave of an ending diagonal. Once it's complete, we're about 75% of the way through the ending diagonal. We have one more wave down (a fast one — wave 4) and one more wave up to a final high (these waves can be fast or slow, but they go up in three waves and cannot be longer than the height of the third wave).

In other words, we're getting close to being done with this final pattern. The US Dollar is also very close to a top and we may see that happen this week. It's making the overall market (certainly currency pairs) quite volatile. As I've been saying the low volume pays a large part of that volatility.

This week, ES claimed its status as an ending diagonal as predicted (the pattern that extends back to Feb. 9). Everything is now in place for a turn to the downside.

The coming wave down (the fourth wave of the ending diagonal) will have a target somewhere near 2600-25.Then we'll turn up into the fifth and final high ... but a high that will have a definite maximum target (to be determined once the fourth wave is fully in place.

Summary: We're waiting for the final wave of a smallish ending diagonal (within a much larger one) to play out. Once it ends on the upside, we'll head down into the fourth wave of the ending diagonal in ES. Once the 4th wave (down) is complete, expect a final fifth wave to a new high. That fifth wave up to a new high will be the end of the 500 year bull market.